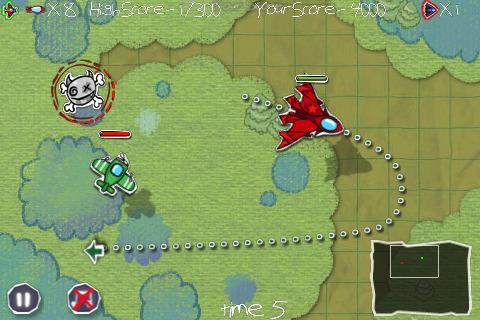 Some ideas seem like they were destined to go together. Peanut butter and jelly. Salt and pepper. Simon and Garfunkel. Doodle Sky is what it would look like if Steambirds and Flight Control had a baby and smooshed it onto the iPhone. Like all offspring, though, this child doesn’t necessarily inherit the best traits of both parents.

Doodle Sky is a game of real time aerial combat that prefers line-drawing to precision flying. Players will complete 15 missions (5 free, 10 available for in-game purchase) with objectives that more often than not mean wiping every other plane off the screen. You’ll do this by drawing lines with your finger that your fighter will follow. Once in range of another plane, your fighter will engage automatically. In this regard, the gameplay will sound nigh-identical to Steambirds for some.

The difference here is that the gameplay takes place in real-time. While Steambirds offered up a turn-based strategy experience, Doodle Sky prefers quick real-time reflexes built on the same template. Many of the same strategies you’ve learned in Steambirds, like trying to stay behind the enemy, will still apply here. The real-time nature, however, means you’ll need to make quick off-the-cuff decisions to get out of the line of fire, much like you’d draw new lines to prevent planes from crashing into one another in Flight Control.

Player can unlock an assortment of 5 planes as the game goes on, and purchase an additional 3 more in-app. The fighters are unique not only in appearance, but also in stats. One plane may be faster than another, while another may be able to absorb more damage. One plane, while fragile, can detect otherwise invisible stealth fighters. Figuring out which ship to use when offers up a nice taste of strategy gameplay, though for the most part the most recently unlocked ship will do the task better than the one before.

Once the game has been completed, players will unlock “Death Mode,” a high score drive that will pit players against an endless series of ships to see how long they can survive. Given how quickly you’ll progress through the 15 missions, offering up a decent endless mode like this gives this aerial experience some much needed replay value.

Doodle Sky manages to set a new low for broken English – a strange twist considering how polished the rest of the package comes across. Lines like “bring back the superiority,” “the players just need to draw lines on the screen to finish all the controls,” and “our airspace is facing with the invasion of the enemy” run rampant in nearly every corner of the game. 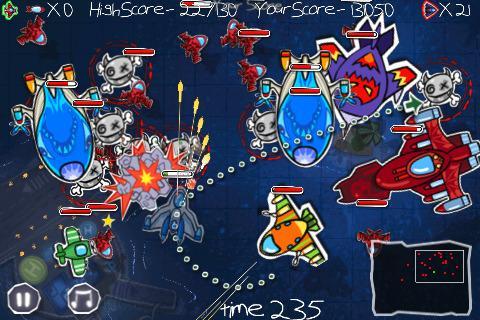 We were also a little disappointed to find that players are only in control of a single ship rather than a squadron. Controlling 3 or 4 fighters around the map would have provided a good deal of challenge and been a perfect fit given the gameplay, yet you’ll only be piloting a single aircraft. It’s little elements like this, or the fact that the game lacks the turn-based strategy, that makes this package less appealing than the currently web-based only Steambirds.

One of the strongest things Doodle Sky has going for it is a slick visual charm. The ships and backgrounds feel like they’ve been hand-drawn and clipped out of a notebook page, but never in a way that feels unpolished. When you hear “doodle” in a title, it’s almost universally a substitute for “we didn’t have an artist on staff.” Nothing could be further from the truth here. Every ship looks unique, and the colors just pop. Despite its other weaknesses, Doodle Sky is an absolute feast for the eyes.

It’s simple and it’s fun, but Doodle Sky just isn’t the game it could be. There’s a good deal of potential here for the future, but as it stands the challenge has been set too low and the game lacks the variety needed to remain interesting for long. Seeing some of the suggestions made here employed in future updates would turn Doodle Sky from a good experience into a great one, but as it stands now, you’ll only get a taste of what it could be.