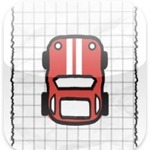 Remember those relaxing days, taking long drives around rulers, compasses and sketches? No? Then you haven’t been playing Doodle Kart. Though not the most picturesque routes out there, it’s definitely worth the trip.

Doodle Kart is a top-down racer where you don’t race on real terrain so much as obstacles drawn on paper. The backgrounds look like they were sketched on graph paper (complete with light-colored grids) and someone left the pencils and doodles behind. You take control of one of four competitors in a five-race circuit across one of five cups (25 races in all). With five difficulty levels to play through, there is a lot of long-term playability here.

Before each race, you can customize your kart by balancing the way you want it to drive. There are five categories: speed, acceleration, handling, weight (how likely you are to be spun by other cars colliding with you) and items (how effective your special items are). There is a finite number of chits that can be applied to each category, but it allows you to customize your driving to suit your playing style.

Controlling your vehicle is great in Doodle Kart. There is a bevy of options here, from tilt control to onscreen steering buttons (by your left thumb); auto-gas or actually choosing to brake and gas (by your right thumb). You can even choose whether to play the game in portrait or landscape mode to suit your hand size (the game plays well regardless of the screen orientation).

What you’ll find is the play control is very clean and tight, especially if you maximize the handling meter for your kart. The only thing to remember when playing with the steering buttons is that left is as if you’re turning a steering wheel left, not necessarily corresponding with that direction. So, if you’re driving towards the bottom of the screen, remember that the right steering button will swerve your car towards what appears to be left. It is a bit confusing at first, but is quickly figured out.

Each of the courses has a decent variety of tight curves, obstacles and even multiple routes. Some of the forks in the road are shorter but more difficult, while another fork will simply take you to a cliff and drop you off! (Don’t worry; the latter example only happens if you ignore the very large sign by the split telling you where to go.) To aid you in your battle for victory lane are the requisite kart battling items. These items range from single-fire rockets to little multiple-shot pea shooters to dropping pits in the road and even turning invisible to steer right through your opponents. Other than the single-shot pencil, each item is very useful, and easy to use with just a press of a button.

If you need to practice a particularly difficult track, Doodle Kart allows you to play a single race, either with or without a computer opponent. However, you can only play on the cups you’ve unlocked.

Where Doodle Kart stumbles is in the little details. For instance, there is only one music track while racing. Though it is a fun salsa-style track with great humor that mirrors the game, it does get tiring quite quickly. You can mute the sound, but either more tunes or the ability to use your own music would have been welcome.

Other times the game is just confusing. Laps are counted not based on the one you’re on, but how many you’ve completed. For example, if there are four laps in a race, the counter will start with “0/4” rather than the more logical “1/4” saying you’re running the first lap. Another is simply the language of the game. If you hit “New Game” on the title screen, the game will warn you that it will delete all saved data. What it actually means is that if you saved in the middle of a circuit, that temporary data will be lost, but all the tracks you’ve unlocked are still open.

However, Doodle Kart suffers from some lost opportunities. While there is OpenFeint compatibility, there is no multiplayer mode. And sometimes, those courses just feel really empty. Four racers is nice, but eight would have felt deliciously frantic.

Bearing in mind that Doodle Kart is a budget title, there is a lot of value for the little money you’ll put out. Sure, Doodle Kart is a rough sketch, but it’s a delightfully-fun and highly-playable racing game that will numb your thumbs for a good while. Sharpen up those pencils and give Doodle Kart a try. You’ll certainly “draw” the same conclusion.