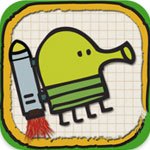 You know that feeling the first time you played theYetigame where you whack the penguin with a bat and send it flying across the screen? When I first played theYetionline game years ago, I kept trying to beat my high score (sending the poor penguin further and further) and before I knew it, an hour had gone by. That’s what happened to me the first time I played Doodle Jump by Lima Sky. This simple, yet ridiculously addictive little game will suck you in . . . you’ll find yourself playing over and over until you have to tear yourself away or risk spending your entire day on a quest to become the Doodle Jump master.

Then, of course, you’ll be proud of your accomplishments, so you’ll want to post your score on your Facebook page “wall” for all of your friends to see. At least, that’s what I did. Facebook is quickly becoming a place where I share my gaming accomplishments (I am so proud of my Farmville farm!) as well as keep in touch with friends and family. It’s getting to the point where I find out new information from my friends through Facebook now instead of in person or through email, so it is only natural that I would want to share my high score on Doodle Jump with the world (even though it appears it was not really a very high score).

Aside from the addictive gameplay, simple, yet adorable little doodle graphics, and tie-in with Facebook, Doodle Jump really doesn’t have much depth as a game. The objective is similar to that of Papijump, a game that I played a lot when I first got my iPhone a year ago. Your goal is to try and get your “doodle man” as high as you can, while avoiding obstacles and enemies and staying off tiles that fall away (and send you crashing to your demise). Along the way, you encounter some inventive helpers like springs and propeller hats that make it really fun. If only that propeller hat could take my doodle further! Similarly to Papijump, the higher you get, the more points you score.

Even though the games share a common game mechanic, I would say that Doodle Jump is more interesting than Papijump because there is more variety. For example, you’ve got broken, moving, disappearing, and exploding platforms that keep you on your toes as you strive to get your doodle higher and higher. You’ve also got some cool monsters, abducting UFO’s, and black holes to impede your progress. And you’ve got jet packs, propeller hats, and spinning bones to help you fly. Lots to keep you interested for a while.

I will admit though, that since the objective never changes (get as high as you can), the game can get repetitive and tiresome after awhile. But I could say that about a lot of games. They are good for short sessions of play – like in-between meetings or sitting at the doctor’s office or waiting in line or trying to look like you’re checking your email in the middle of a boring meeting. You know what I mean. Some games are great for short sessions of mindless play, but if you try to play for too long, you can get weary.

Despite the potential weariness that can set in after repeated plays, the sounds and graphics are fun and light and even motivating. I found myself looking forward to hearing the whirring sound of the propeller hat because I knew that was something that could help me get higher. The iPhone speakers are so terrific you can clearly hear the sound effects and you learn to fear certain sounds and rejoice at others. That’s good sound design in my book.

User generated content seems to be the rage these days. And Doodle Jump does not disappoint on this front. When you put in “doodle” as your name it will take you to another screen that lets you make your own character. I liked this feature a lot. Who doesn’t like doodling? And doodling on your iPhone? Very cool indeed. For what it is, and at the rock bottom price of $0.99, I would definitely recommend Doodle Jump as an enjoyable way to pass the time if you’re stuck in a meeting or someplace you’d rather not be. Wouldn’t it be nice if you could just whip your own propeller hat out of your purse, flip a switch and fly away?! A round of Doodle Jump is about as close as you can get to that!