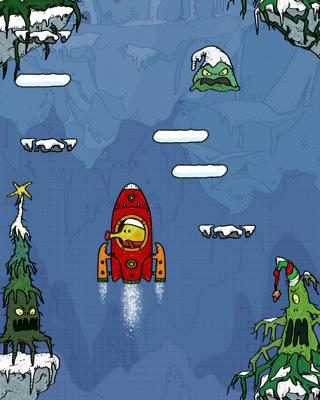 Being the first real mega hit on the iPhone might make Doodle Jump an iconic name amongst gamers, but it also suffers the fate of feeling a little dated in the face of every jumping game that’s followed. As the second standalone release in the series, Doodle Jump Christmas Special had a chance to add some new twists to this growingly stale formula. Instead, it’s the same old experience with a snowy coat of paint thrown on top.

Like the game that came before it, Doodle Jump Christmas Special is an endless survival game about guiding a little doodle monster as high as you can. Players tilt their device to control the monster’s ever-bouncing direction, and if he misses a platform the game will come to an end. If you’ve played the original, you know everything that’s on offer here – and we can’t stress the word “everything” enough.

To add insult to injury, the original Doodle Jump already has an included Christmas mode, making this release little more than a quick cash grab for an experience you can already enjoy in the previous version. 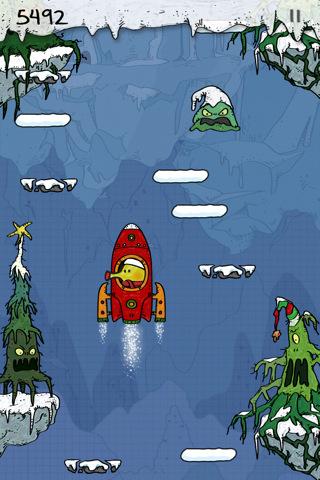 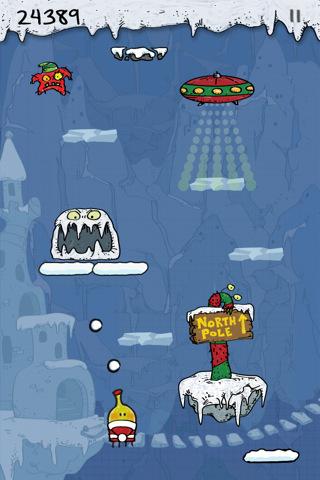 That being said, the two Christmas versions are somewhat different – and Doodle Jump Christmas Special does offer more detailed art than its predecessor – but the art in this new version is no more detailed than you’d find in some of the later free updates to Doodle Jump such as the underwater stage. Still – it’s nice to see such highly detailed monsters and and Christmas trees in the background. The whole thing comes across a little like Dr. Seuss and Tim Burton collaborating on a Christmas special.

We were also a little surprised by the complete lack of music. It’s a problem that was evident in the original game too, but when you’re offering up a paid spin-off with a holiday theme there’s simply no excuse for not including some public domain Christmas tunes.

In revisiting the game’s official iTunes page shortly after its release, it became pretty apparent that we weren’t alone in our feelings. So much so, in fact, that developer Lima Sky felt the need to explain the release to their audience; “We wanted to make it a free update… but we were not able to fit all the new graphics within 20mb.” While we appreciate their desire make the game downloadable over mobile networks (20mb is the iTunes limit for that), there’s no reason they couldn’t have made this an ad-supported free download, or simply trimmed some of the offering to make it fit as a free update to the original release.

There’s no denying that Christmas Special is just as much fun to play as Doodle Jump, but unless you’re willing to pay 99 cents for a new seasonal skin, there’s simply no reason to purchase this item. We like that Lima Sky is promising new content for this release in the future, but until that happens, we’d advise you to keep that dollar in your pocket and stick with the version you no doubt already own.