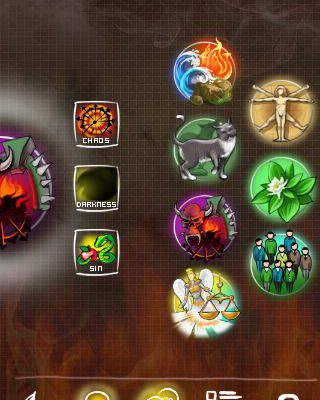 Doodle Devil proves that more of the same can sometimes be a good thing.

God may have created the heavens and the earth, but being the Devil can be just as busy. While the all-powerful deity of Doodle God may have been responsible for everything from lava to human life, the Lord of Darkness in Doodle Devil has been toiling away at exploiting the weaknesses of man with creations like greed and war. It’s that delicious taste of evil that separates Doodle Devil from its predecessor, but little else has changed in this unique game of discovery.

Like Doodle God, the premise here is simple. Players will combine elements to make new elements. The object of the game is to uncover all 107 elements. For example, when you combine earth and fire, you get lava. Once created, lava can be combined with water to make stone. Stone meets fire to become metal. The combinations go on and on.

Doodle Devil starts you with as lowly two elements, but that quickly expands to around a dozen that you can play with. Unlike Doodle God though, things take a bit of a more sinister tone. Those first two elements? Human and Apple. That’s right – it all begins with the original sin in the Garden of Eden – the Fall of Man. 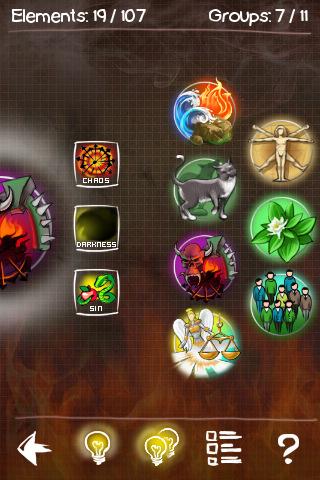 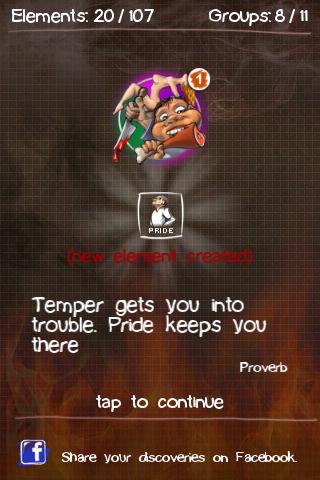 Once you combine those two, creating knowledge and sin, a handful of other starter elements get dropped into your lap – many of which you’ll recognize from Doodle God. In fact, a number of the earlier combinations are cut and paste from the original, bringing that 107 elements down to a unique 70 or so (admittedly, that’s just a ballpark figure). It’s a bit of a disappointment, but honestly detracts very little from the experience. Once you start creating individual sins and the elements of good and evil, it’s very easy to overlook the elements you already know.

In fact, asides from the new elements, there are no real changes to speak of anywhere in Doodle Devil. Normally we’d argue this as a negative, but considering Doodle God is one of those games that left us wanting more, we’re just happy that more is what they’ve delivered. Developer JoyBits has actually been pretty great about adding more to the original, with content updates introducing new elements and gameplay regularly since its release. No word on whether or not the same thing will happen here, but even if not, Doodle Devil is just as enjoyable an experience as the original was at launch.

If you haven’t played the original, you’ll find there’s a lot more content in Doodle God for the same price – but admittedly, it’s also a little more daunting of a task for first time players thanks to the massive assortment of elements. Doodle Devil offers up a great taste for veterans of the original and a more comfortable starting point for those new to the series now that Doodle God‘s elements total 246. If you’re up for the challenge of creating new things out of old, consider Doodle Devil 99 cents well spent.