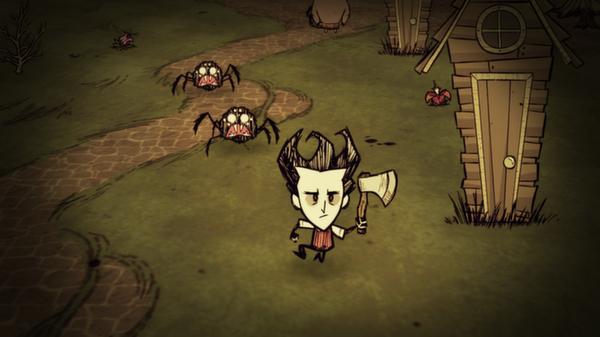 Being hungry doesn’t seem so bad when you have hordes of spiders to worry about.

A few minutes ago when I sat down at my computer to start writing this review, I saw an enormous and terrifying spider crawl under my desk, and now I keep nervously glancing down at the floor around me every five seconds as I type this so I can scream and run away whenever he decides to come back out. In some ways, this is sort of what it is like to be scientist gentleman Wilson in the fantastic new survival adventure game Don’t Starve: always keeping one eye over your shoulder, your safety always in question, and never knowing when or where the next frightening creature is going to appear. It’s a good thing that playing this game is a whole lot more fun than sharing your workspace with an unwelcomed eight-legged guest.

The fundamental gameplay in Don’t Starve is built around an internal timer, which forces you to always be aware of your surroundings, know what time of day it is, and how much of each item you have left in your inventory. The objective is simple: survive for as many days as you can, using only your wits and the land. As you might have assumed from the game’s ingeniously direct title, Wilson will have to constantly find ways to feed himself during his trek through the wilderness so he doesn’t starve (in addition to making fire before nightfall, as a loss of total visibility results in instant death).

You can appease your hunger in a number of ways, like eating plants and berries; setting traps for rabbits and some of the game world’s smaller creatures; and hunting down some of the larger ones like the funny-looking “Beefalo.” Hunger is different than your health, which is different still from your sanity meter, which can make the woods go all blurry if Wilson eats some funky mushrooms or happens to see one too many frightening shadow creatures.

The game is heavily based in trial and error, and it reminds me a lot of one of my favorite indie games, The Binding of Isaac, in that you’ll end up dying dozens of times before you even remotely start to make any real noteworthy progress. On my very first attempt, I started my fire a tad bit too early on Night 1, so it went out before the sunrise and left me to be gobbled up by some awful monster that lurks in the shadows. On my second attempt, I looked away for just a moment, and then a freakish one-eyed giant chicken thing bounded on screen and pecked my head off in an instant.

But the game is witty, bold, and has a great incentive to keep hitting that “Play Again” button and explore a little further. After each one of your survival attempts, your total days spent are calculated into experience points, which will then unlock a number of additional characters, each with their own respective skills and attributes. The only real hiccup I ever encountered in the game is that sometimes Don’t Starve will hang for a few seconds before the start of each new day, although this never led to any serious crash issues or otherwise. 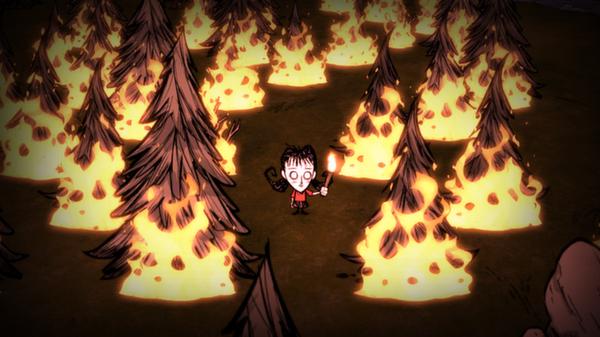 The real beauty of Don’t Starve is that every time you think you’ve gathered your bearings, something new will come along to completely ruin your day. For instance, at one point I came upon a nice brick road during Day 7. “Cool,” I thought. “I’ve never seen civilization like this before! I wonder where it goes.” After following the road for a few minutes, I discovered that it led me into a little village of pig monsters, who then proceeded to beat me to death within mere seconds. Game over. Another time, I happened across a series of little puddles with frogs hopping around them. “Yum,” I thought, “time to get me some frog’s legs!” Then all of the frogs banded together and swarmed over my helpless body as they proved to be fairly organized and lethal. Game over again. As you can tell, Don’t Starve is the kind of game that is best described through personal anecdotes, as half the fun is relating to your friends how you did everything in your power to attempt to survive, and what it was that ultimately forced you to meet your demise.

Each randomly generated game world is absolutely massive (although you have the option to change the overall size in the customization screen), and there are a handful of worm holes that look like these gross gaping mouths which let you fast-travel between different areas on the map. Everything about the presentation of Don’t Starve, from the unique graphics to the truly believable sounds and fluid animations, is absolutely stunning. And the different area environments like forests and plains (along with weather effects like rain and snow) fully ensure that you’ll never have the same adventure twice. 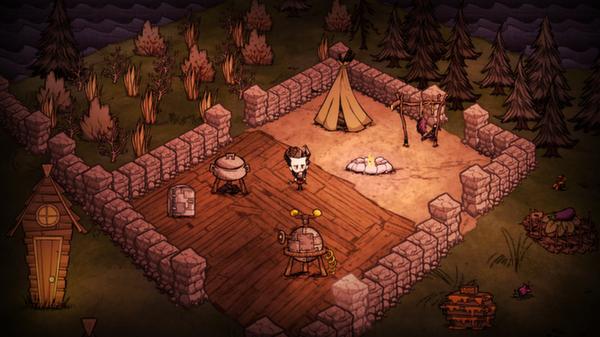 There are also multiple levels of crafting and scientific research for even more possibilities: grass can become ropes, rocks can be whittled into slates, and logs can become smoothed into boards for heftier construction. Find a grave? Use your shovel to dig up some treasures! Don’t like the look of all that grass? Pull it up with your pitchfork and start planting some seeds! The game seems to have thought of everything, and all the different options and progressions are heavily steeped in logic (and science of course!), where you can constantly build new prototypes for weapons and items that will enable you to survive for just a little bit longer.

In many ways, Don’t Stave is the quintessential indie game, with the perfect blend of depth and simplicity, and the flawless premise to keep you playing for days and days on end. After spending more hours than I would care to admit with this game, I still feel like I have barely even scratched the surface on everything this one has to offer. Do yourself a favor and see how long you can survive in Don’t Starve, but make sure you always keep that growling stomach happy!

I’ve reached the end of my review, and that spider still hasn’t come out from under my desk. I think it’s time for me to run away now.