Goko stakes out its initial Dominion in the online gaming world

Dominion is one of the cleverest, most innovative and genre-defining card games of the last decade, but it’s also one of the driest. The continual card-sorting and shuffling was annoying, and with virtually no interaction, I felt no great draw to play it with other people. Computer implementations, however, are another story; and HTML5 gaming suite Goko is offering the game for free, with the added convenience of playing in your browser.

At first glance Dominion is a ludicrously simple game. Everyone starts with a deck of cards, consisting mostly of coins. You play coin cards from your hand to buy new cards to add to your deck. These can be more valuable coins to increase your purchasing power, or victory points to count toward your win, but are mostly action cards. You can play one action per turn, and these usually add more actions or coins or cards or buys for you to use,although some have more complex effects. Then you discard your remaining cards and draw five more, ready for your next turn. Once all the victory point cards of one type have been purchased the game ends and the highest point total wins. 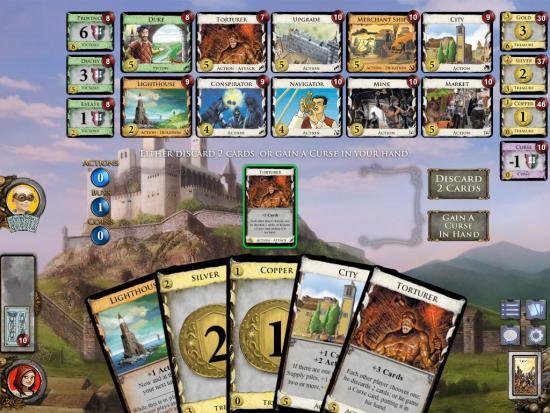 Like many apparently easy card games, though, this simplicity is deceptive. In each game there are a selection of ten different action cards to choose from, and these ten are chosen from a very wide pool. Most of them add new powers and abilities to the game when played. So you’re not really just playing that simple Action, Buy, Cleanup rule-set – you’re playing it plus an additional selection of rules depending on the action cards in play. It’s nowhere near as easy as it sounds, and I’ve seen people unfamiliar with hobby card games completely flummoxed by this apparently “simple” game.

For seasoned gamers, though, Dominion is a breeze. And while the lack of player interaction or narrative potential in the game is disappointing, there’s no denying its basic framework of mixing up the action cards available offers a staggering variety of different and often challenging strategies to get to grips with.

The Goku implementation is, perhaps surprisingly given the limitations of web languages and the vagaries of different browsers in interpreting them, almost flawless. The worst technical niggle is a tendency to hang mid-turn for long enough, 20-40 seconds, to be frustrating. But considering it’s a free service that runs on a variety of browsers, that seems like quite a small complaint.

You can create an account or sign in with Twitter or Facebook, carefully construct an avatar or choose a random one, and start playing right away. There’s a single-play mode against a capable AI, but this is really of interest only in learning the game. Most of the action is in the remaining options. The first is network multi-player which is, again, implemented smoothly and easily. Just go into a lobby, chat with people waiting, start your own game or join one with open seats. There are separate casual and pro leaderboards on which to compete. Anyone familiar with online gaming will be right at home.

The other play mode is labelled “adventure” and is effectively a campaign-style series of one-off games against AI bots of increasing skill and more powerful preconstructed decks. There’s a weak narrative to link them together, but the sense of progression really helps engage and retain interest in solo play against the computer. To help with the tougher games you can use “zaps” to upgrade your starting cards, but you only start with two of these. To get more you need to spend in-game coins which can either be earned with play time or bought with real cash.

That’s where the freemium model comes in. And you can use the coins for a lot of stuff besides zaps. They’ll unlock a wide variety of new cards for you to play with and adventure lands to explore, some of which require extra spending to access the finale. But it seems a fair and balanced model. You can earn much of what you need through skilful and dedicated play time, and cash only seems necessary for the impatient or addicted.

Goko’s engine for Dominion is excellent, and brings the game within easy reach of pretty much anyone with an internet connection. The not infrequent moments of lag are annoying, but largely unavoidable for browser-based games. And the adventure mode is a great addition that helped even me, with my jaded attitude to the card game, rediscover how much fun the game can be – especially when there’s a computer do shuffle your cards and tidy up when you’re done.