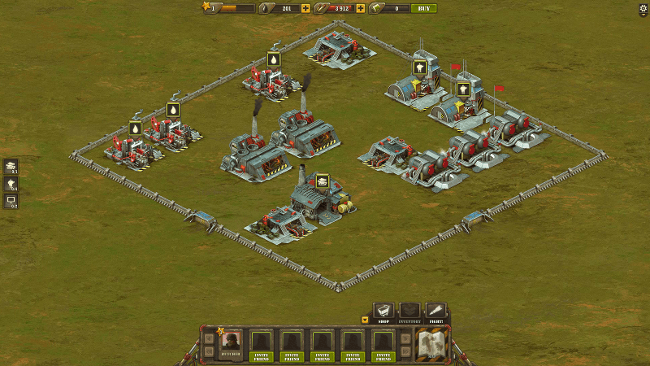 Dominator has fun strategic battles, but long waits and missing features taint the experience for now.

I don’t think any other Facebook game has thrown me into the action so quickly as Dominator. No tutorials pop up with cartoony military types barking out orders, no floating arrows indicating crucial actions mar the interface; instead, within seconds, Dominator tosses you into the gridded battlefield with soldiers on both sides already in place. It reveals its debts to turn-based games like Final Fantasy and Might & Magic as early as the first move, and it flaunts its focus on challenge as the opposing team starts to mow down your preset jarheads. It may even be possible to lose that first firefight.

It’s a design that shoos you out the door before you’re too comfy in case you’re cut out for this type of strategy, and in its simplicity, it promises new and exciting experiences down its mortar-pocked roads.

That’s why it’s such a letdown when the moments after the battle reveal the familiar camp of resource buildings, each with upgrade timers and associated costs. They’re well-rendered, complete with animated pumper jacks for the oil facilities, but Dominator wastes no time in slapping you with a wait of almost three hours to upgrade the Weapons Factory. The idea, of course, is to use the extremely generous stash of 1,000 premium dollars you’re given after starting out to speed things up (although Dominator never explicitly states this), and it should last you well into the second or third level if you’re careful.

Alas, it’s in design decisions like these that force the appeal of Dominator‘s “no tutorial” approach to wear off, as the extreme waits place a hefty speed bump into the gameplay far too soon. Even dropping the first tier down to an hour might have eased the initial burden. But as it is, once you finish upgrading the Arms Factory, several other mission will pop up for upgrades for other buildings, and the same demands of time or premium currency serve as unwelcome reminders of how expensive Dominator can eventually become. It’s not as if you can ignore the upgrades, after all; they’re of paramount importance for your success in the battles of the campaign and PvP. 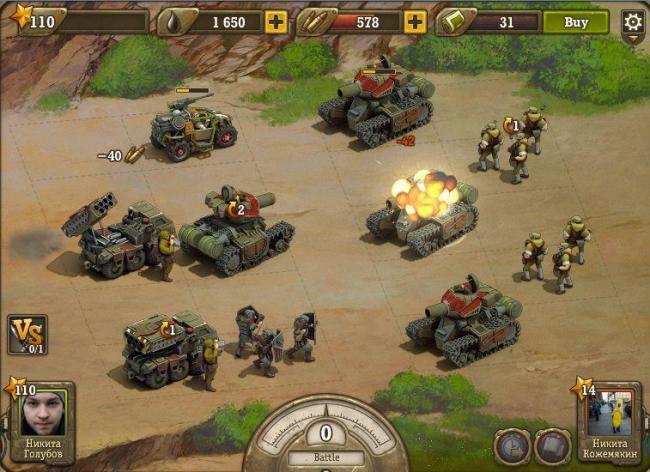 That’s where the fun is, although the campaign is limited to two series of missions with battlefields that look precisely alike in each. It’s fun for the most part, based as it is on placing your five different sets of units on one of the two rows of five squares allowed for your sides. Rangers, for instance, have low health but can fire on soldiers on the enemy’s first row with impunity, or at least until all the soldiers in the front row die, forcing them to move up. Machine gunners are more resilient, boasting a large health pool and the ability to fire off weak shots that damage units across three different squares. Placement is everything, and the fact that all this fighting depletes your available bullets with alarming speed forces you to pay more attention than you would have in a friendlier strategy game.

The two boss fights can be a challenge, but the frequent misses that extend to the regular fights as well sometimes make them feel like more of a chore than they need to be. At one point, I saw my team and my opponents trade off six turns without a single shot landing. The bosses themselves move in after their squads go down, and defeating them rewards you with such unexpected sights as the Marauder’s arm flying off while he makes one last desperate attempt to stab you with his dagger before falling face down in the dust. Indeed, aside from the visual sameness of the battlefields themselves, Dominator is a remarkably good-looking game, and the hint of an unreleased third campaign at least promises some additional variety. 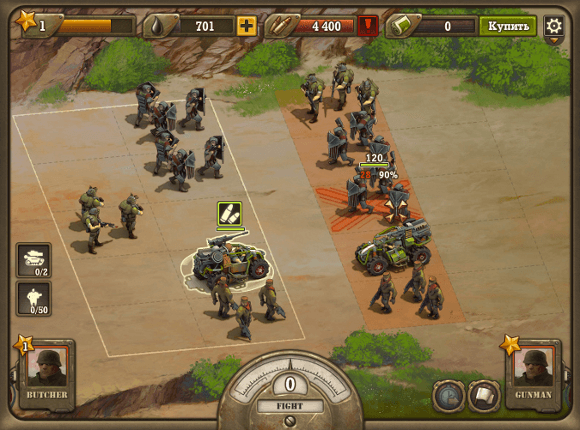 It’s still a fun game even in its beta phase, and its technical problems extend only to rare instances of poor translation, such as when one of the only pop-up messages bids you catch the Marauder “until it’s too late.” It’s the missing elements that hurt the most, such as the option to play in private matches against your friends. If it does exist, figuring out how isn’t intuitive at all. The long waits, too, may chase away players who aren’t enamored with the possibility of losing on their first battle, and the massive resource depletion creates unnecessarily long waits before you can get into the fun again (unless, of course, you spend some premium currency). In time, Dominator might be worth all those microtransactions, but for now it has a ways to go before it can dominate the social strategy scene.