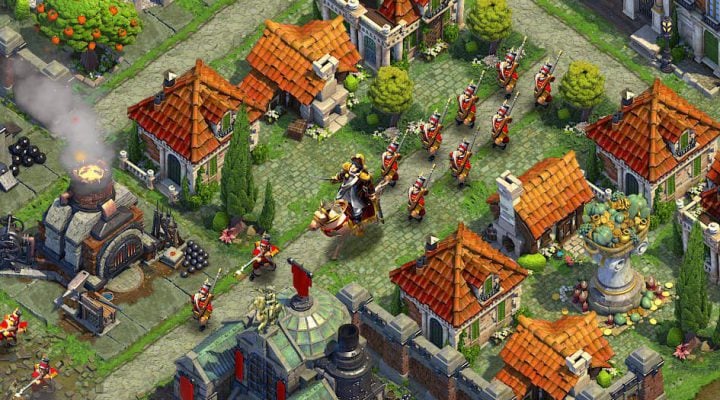 Merges elements from Civ-style strategy into base building flawlessly

More to do than in most base building games

The multiplayer matchmaking needs some refining

At the time of this writing, DomiNations has only been on the App Store and Google Play for a few days. Thanks to an early Canadian release, though, I’ve been playing it a lot longer than that.

And I think that’s something worth stressing here. For the better part of two months, I’ve found myself checking in on my little empire every day. I don’t always fight a battle, or upgrade a building, or hunt a bear — but I always do a little something. And as someone who spends their life trying to play every mobile game that comes out, finding a game that has this kind of stickiness is a rare thing.

That alone should speak volumes about how much I’ve been enjoying DomiNations. 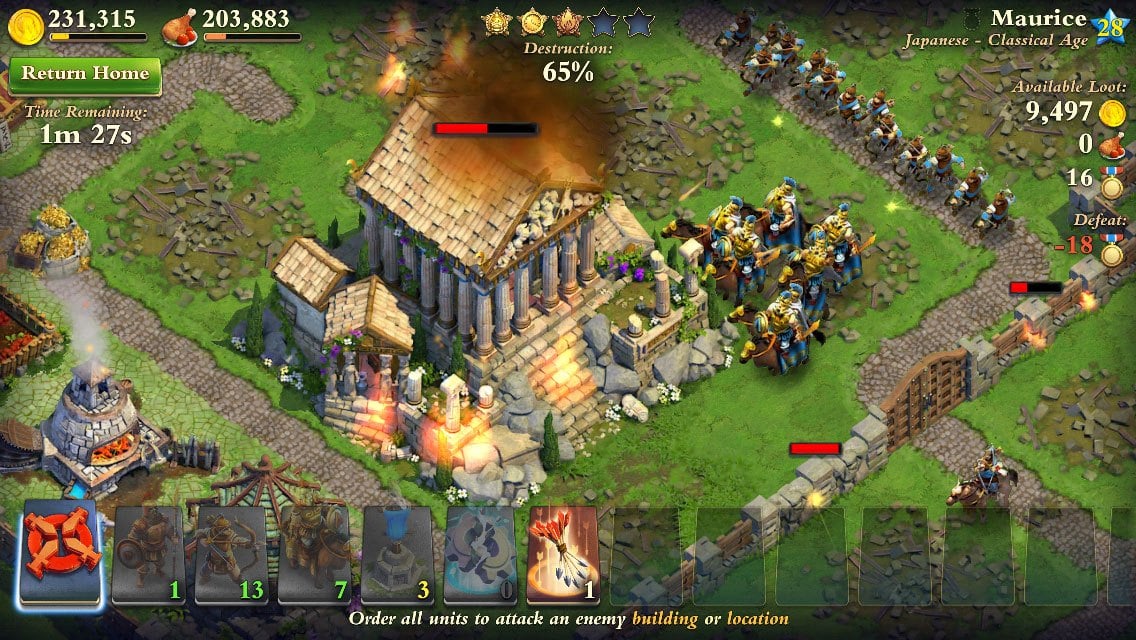 At its heart, DomiNations is the latest in a seemingly endless line of games trying to capitalize on the Clash of Clans formula. I’m hesitant to use the word “clone” to describe such games, because in my opinion, we’ve reached the tipping point: base building is genre now, and it’s time we treat it as such.

Coming at it from that perspective, it’s easy to see how DomiNations is trying to push the genre forward; trying to be something different, yet intractably familiar.

Developed by the recently resurrected Big Huge Games, DomiNations fuses the studio’s love of history with the Clash of Clans formula. What results borrows liberally from games like Civilization, and is all the better for it. Players advance through the epochs of human history, pick different civilizations and wonders, and even research perks on a tech tree. 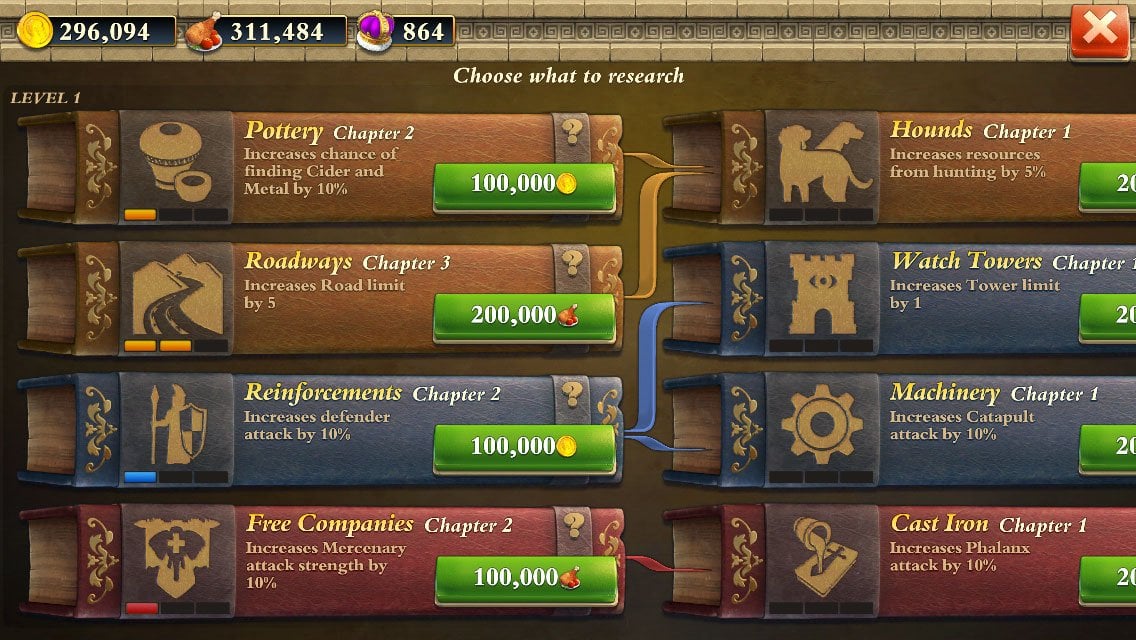 When one genre borrows so liberally from another, there’s always a fear in the pit of my stomach that the developers are trying to force a square peg into a round hole. That’s not the case here. The Civ-style elements provide healthy muscles around this game’s Clash of Clans skeleton, and unlike most games of this sort, it leads to different players developing genuinely unique bases and armies.

Once you reach a certain milestone, you’ll pick one of seven different nations to represent your growing empire. You’ll no doubt select this based on the nation-related perk that appeals to you most (or even just the aesthetics), but that choice will also affect what sort of military units you’ll produce. Each nation has an exclusive unit, and since attacking makes up so much of the game, you’ll want to make sure you pick the fighter that makes the most sense for you.

As an added incentive for joining an alliance, troop donations from your mates can include these special units that you’re otherwise locked out of. 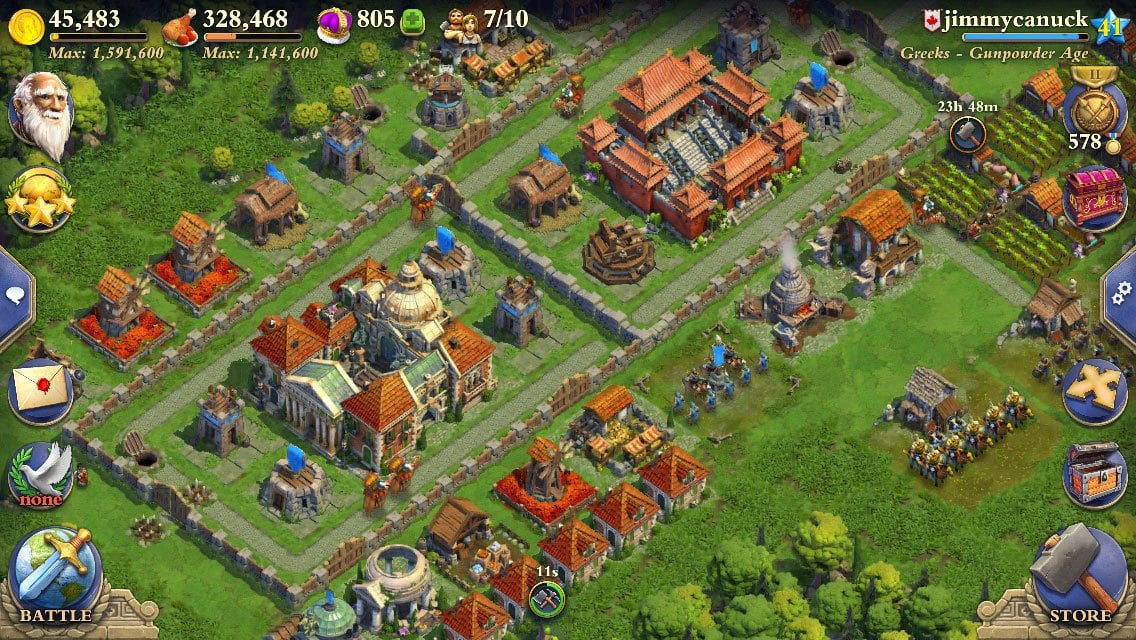 Decision-making like this permeates every corner of DomiNations, and it’s a big part of what sets the game apart. Wonder building is another great example; you’ll get to build one every so often, but you’ll have to pick from four different wonders, each with their own perk. Once you’ve selected, those other three choices are gone for good.

Even decisions that don’t lock you out of things will occupy much of your play. Should you spend your money upgrading to the next level of archer or researching a new perk-granting tech at the library? What’s the best road layout to maximize profit from your merchants? Would your trade goods be better spent on mercenaries for the next battle or a blessing to help you survive it?

DomiNations is a game of decision-making.

One decision you won’t need to worry about, though, is how many troops you should use in battle. While Clash of Clans (and many games like it) consider any militant you use in battle as “spent,” removing them from the game win or lose, DomiNations only removes those who fall in battle. Surviving troops always come home again, ready to fight in whatever skirmish you’ll send them to next.

For all the things DomiNations gets right, there are a few snags in the carpet that need to be addressed. The multiplayer matchmaking doesn’t seem to take your level of experience into account. Frequently, I’d find myself faced with attacking a player 20 or 30 levels higher than me, with no chance of winning. So I’d spend some gold to click “find next match”… then I’d do it again. And again.

In most cases, I would have to spam that button seven or eight times before finding a match that was suitable for my skill level — or more aptly, an easy win with a big payout.

This leads to the game’s other issue, which is sort of the inverse. Ever since the game went live worldwide, there’s been no shortage of players looking to attack me — and those players are cleaning me out. Even with peace treaties that protect me for a set amount of time, I’m losing money faster than I can make it. This has brought my civilization’s forward momentum to a grinding halt.

And it’s a shame, because after spending all of this time with DomiNations, I still don’t want to stop playing. I’m a stone’s throw from being able to build a castle to unlock the next feature of the game – a general for my army – but I just can’t keep the currency growing to make it happen.

Balancing issues like this are the sort of thing that can be ironed out with a few tweaks and updates, and I’m going to remain hopeful (or at the very least, cautiously optimistic) that Big Huge Games can make the small changes needed to keep players from feeling defeated by the system rather than an equally-match foe. 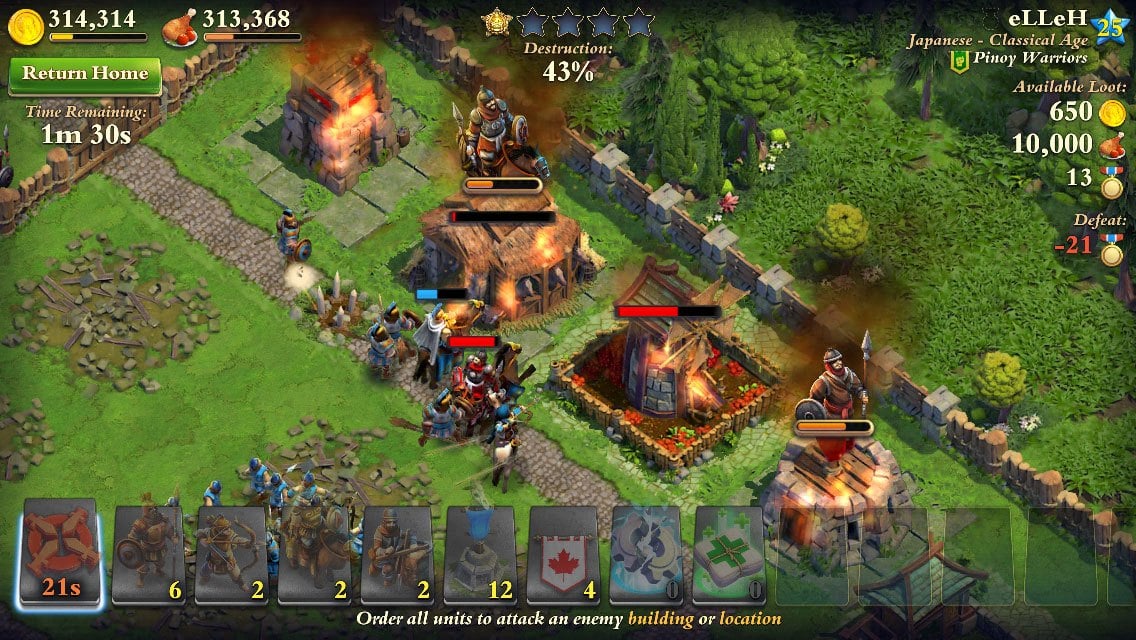 Yes, in a nutshell, DomiNations is Clash of Clans meets Civilization — but don’t let glib descriptions like that paint the picture for you. This isn’t one game slapping a coat of paint from another game on top; it’s a brilliant merging of two formulas that complement each other perfectly.

If you’ve been itching for something like Clash of Clans. but with a little more meat on its bones, this is it. If Big Huge Games can balance the multiplayer a little better, it wouldn’t be far-fetched to call DomiNations the new gold standard in mobile base building games.