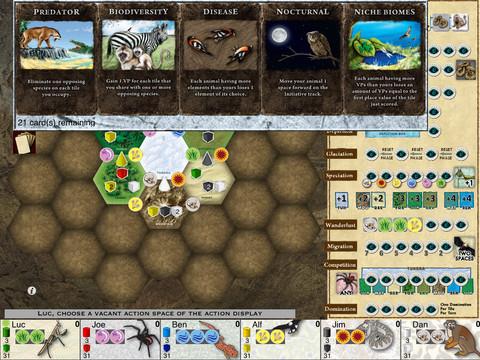 Not the best beast on the block.

When the board game Dominant Species came out in 2010, it most definitely lived up to its namesake, earning a swatch of awards and topping many lists of end of year favourites. Yet a persistent complaint about the title was its beastly play time and administrative overhead. At 3-4 hours for a complete session, and with hundreds of cubes and chits to organise, sitting down for a game was a logistical nightmare. To our mind, an iOS version seemed the ideal solution. It seems publisher GMT agrees.

If it wasn’t apparent, Dominant Species is a complex game. You’ll control different types of animals struggling to flourish in the teeth of an impending ice age, balancing the requirements of their species with the resources available on the board. During the course of a game, you will spread your tribe where you can while still remaining in competition with other species. Each turn, you’ll pre-select actions such as breeding more animals, exploring the world, or migrating with their current stock, adapting their animal to consume new elements or spreading and removing elements already on the map. Each turn, it’s a matter of getting your animals into the best posit to surviving the impending doom, with crucial domination cards being given to players who rise to the challenge. This pattern is repeated until the ice age card arrives and ends the game.

One paragraph cannot do justice to the extraordinarily rich and nuanced strategies for which the game allows. Everything must be carefully balanced and actions timed correctly for best effect. It’s tough enough managing to adapt your animal and meet its needs while allowing it to spread across the map, but you’re also struggling in direct competition with your opponents, and the dynamically changing game state itself. Other animals may steal your resources, flood your spaces with their progeny or even kill your species entirely. Meanwhile the available elements to select for adding to your animal or to the board are constantly changing according to a pattern that must be anticipated and planned around. I’d never played the board game, but from playing the app I quickly appreciated why the original gained such plaudits.

It also meant that I had to learn the game before I could play. Eagerly clicking on the tutorial button I was taken through multiple pages of text with minimal player interaction. Worse, it left me just as confused as when I’d started. The rules are included in the app so I tried to read those and found awkward menus, badly aligned text, and diagrams that weren’t located near the relevant rules. In desperation, I downloaded the original rulebook and found them mind bogglingly dense. It’s a very difficult game to get to grips with, especially for people who aren’t familiar with the wider world of hobby board games, and Dominant Species on mobile does not use its platform-specific advantages to make that struggle any easier.

My first game (with a very shaky grasp of the rules) was played against the first level of AI, which I unexpectedly beat with considerable ease. The second level of AI went down on my second game. A third level is promised but not yet available, meaning that ultimately AI play is not going to challenge most players. Instead, I recommend using it as a way to learn and hone your strategies for games against real people. Here again, I was disappointed in a promise of content rathe than the existence of it. At accords, the app relies on local network play, which is an admittedly nice addition for groups with multiple devices, or little patience for tons of chits. However, the sad truth is that once you’ve mastered the rules and basic strategy, there’s little to keep you coming back for more. 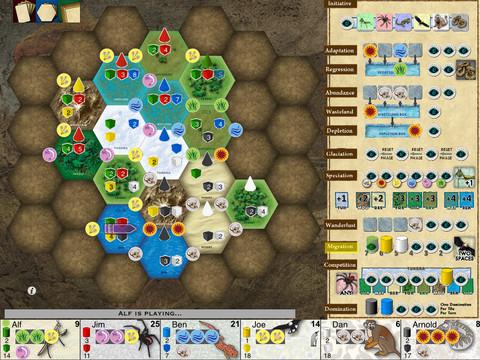 That original board game was lauded as well for its look and feel: a shining example of modern, minimalist graphic design. It’s usual when adapting board games to the iPad to retain the look and feel of the original if you’re not going to outright improve it, but in this instance the transition is an abysmal failure. Dominant Species on mobile is an ugly, murky thing, not enlivened by any sort of touch ups, animation, or music. Similarly scant attention has been paid to the interface, which is occasionally confusing and lacks essential features like an undo button. There appear to be some significant bugs in the enforcement of the rules, too.

It’s a shame, really. Having finally played Dominant Species I can confirm that at its core is a superb strategy game, filled with difficult choices and fierce competition. But this conversion to digital is a weak half-attempt, struggling up from the primordial ooze and gasping for breath on dry land. It takes almost no advantage of the inherent advantages of the format, offering no multimedia, no tutorial, feeble AI and limited network play, succeeding only in streamlining the overheads inherent in the physical game. I can only hope that GMT continue to support and update this release and stop it from coming to an evolutionary dead end. Because in the survival of the fittest, this thing doesn’t hold up.