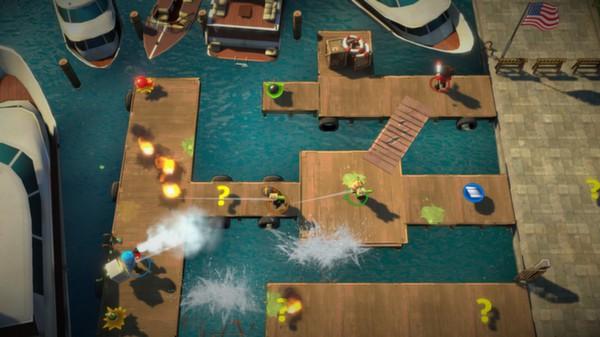 Get some friends onboard, and Dollar Dash has the potential to entertain

Protip: If you’re ever going to rob a bank, try to make sure you don’t do it on the same day as other burglars. As it turns out, nasty people aren’t so good at sharing.

Dollar Dash puts you in the shoes of a robber who not only wants to take every penny available, but also needs to compete with numerous other robbers in order to do so. While the key fundamentals of the gameplay aren’t locked down so well, there’s still enough here to entertain a group of friends for an evening.

It’s worth noting, first and foremost, that Dollar Dash is a multiplayer-only game. Sure, you can jump into a game with up to three computer-controlled bots, but you don’t really get the full picture if you aren’t knocking down human beings and robbing them blind. This means you really need to have three other friends who are willing to also buy the game, unless you’re comfortable pairing up with strangers.

The game is all about rushing around, grabbing money and delivering it to the getaway van, without any of the opposing robbers taking it from you. There’s various weapons scattered around, and if you hit someone as they’re making for the dropoff, they’ll spill their cash on the floor, ready for you to grab.

This is the entire experience in a nutshell, and it works on a certain level. Games are frantic and silly, with plenty of shouting and tomfoolery. There are plenty of great moments, like when someone is making a winning dash for the van, and everyone quickly starts lobbing missiles in their general direction.

But the main ‘Dollar Dash’mode has issues. The main problem is that players don’t really need to rush around grabbing cash – instead they can wait by the van, then attack the person with all the money as they approach, claim the money, and repeat. On levels where the van only appears every now and again this is even worse, as you can basically stand still for a minute at a time and still end up winning the game.

The core of the problem is that Dollar Dash doesn’t really require any real tactics or skill. Games usually consist of everyone running around like maniacs, shooting anything and everything and grabbing whatever cash is available. Only those who choose to get into a bit of griefing are guaranteed any sort of success.

There are balancing issues too. The shop allows you to spend your cash or customization options, which for the most part is great. But you can also grab upgrades and perks, which potentially give you big advantages over other players who haven’t managed to unlock any good ones yet.

Fortunately, there are other game modes which make up for the very average Dollar Dash mode. ‘Hit n Run’ is more of a deathmatch mode, where your goal is simply to attack other players, and this feels far more exciting – sort of like an open-plan Bomberman. The sheer number of maps and weapons available helps to keep this action fresh.

‘Save the Safe’ mode too is solid fun. It’s essentially Capture the Bag, as players aim to carry a safe for as long as possible. Whoever ends up holding the safe for the longest amount of time wins, and watching everyone scramble to gain control of the safe is frantic and wonderful.

Dollar Dash‘s problem is that it focused on the wrong concept. The fighting is far more entertaining that the collecting, and definitely should have been front and center. Still, get a few mates around, and you’ll have a fairly enjoyable evening.