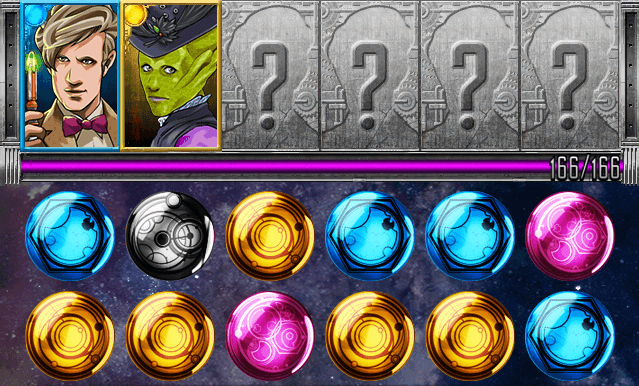 There have been a few attempts at creating Doctor Who games that didn’t feel like glorified cash grabs, but mobile games have never been at the top of the list. Doctor Who: Legacy is a free-to-play effort that, while mired in the trappings of a match-3 gem puzzler, does a decent job of incorporating the lore and attitude of the popular sci-fi series.

Rather than simply matching gems to earn a certain score, the game plays out in a “versus” manner, where you, the Doctor, and several companions face off against enemies that range from Weeping Angels to Cybermen; two popular villains from the show itself.

Various types of gem matches are your only defense against the oncoming threats, and the Doctor (as well as each companion) has a special ability they can unleash against enemies. Some heal, some deal devastating damage, and others have other support techniques that are helpful in battle. Part of the fun lies in assembling a team that can play off of each other well, so as you progress and collect new team members, it’s interesting to test out abilities as well.

You have five seconds to move your gem around when it’s your turn, and rather than moving in a straight line or directly below, beneath, or beside other gems, you can pick one up and slide it all around the board, making it even easier to match. Of course, it can become a little difficult to cause damage to the other side when the game decides to slot a gem other than where you aimed. This can be extremely frustrating, especially if you’ve got a juicy set of three gems where you could potentially make a four or five gem match. Touch controls are a bit slippery, so you have to be extremely prudent when moving around the board.

The game is divided into episodes, where you face off against several of the Doctor’s familiar enemies, and many have the chance to “drop” additional elements that can be used to upgrade characters, or may even introduce new characters themselves, like Rory, the Tenth Doctor, and more. This adds a nice layer of replayability, as everyone wants to collect all the different allies, and ensures players must invest quite a bit of time in the game if they want to pick up their favorite faces and companions from the series.

Of course, if you’re in a hurry you can use the cash shop to purchase additional character packs, upgrades, and more, but smart players can simply grind for the things that they need. It’s possible to get what you want without ever setting foot in the store, but if you’ve got a few extra bucks you don’t mind throwing out to get Amy or River Song (or one of the Doctor’s incarnations) it’s worth it, even if just for ally powers.

Doctor Who: Legacy was a pleasant surprise. It implements characters, locales, and plot points into a competent puzzle match game that should please Whovians and casual gamers alike. Its weak narrative won’t be winning any awards any time soon, and the gameplay may be the same that we’ve seen in countless Puzzle& Dragons clones before, but it’s a free, well-made Doctor Who game that you can take with you anywhere. That’s one huge step in the right direction, wouldn’t you say?