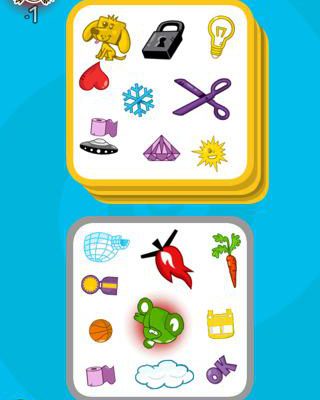 Dobble offers up a fun matching game, but it’s too small an offering to hold your interest for long

It’s amazing what happens to perception when there’s a timer in your ear. It shouldn’t be too hard to look at two cards with 5 little pictures on each of them and pick out the one that appears on both, but there was numerous times I stared at the screen for what seemed like forever, totally convinced there was some sort of mistake there’s no way…. oh, no wait, I found it.

Dobble is a picture matching game where you’re shown two cards with different little pictures on each in random order (clouds, phones, hearts, tomatoes, etc). When the timer starts you need to tap on a picture that is displayed on both cards, at which time a new one flies in to take its place and you need to once again find the picture that appears twice. Seeing how fast you can do this in a set time limit is the whole purpose of the game. 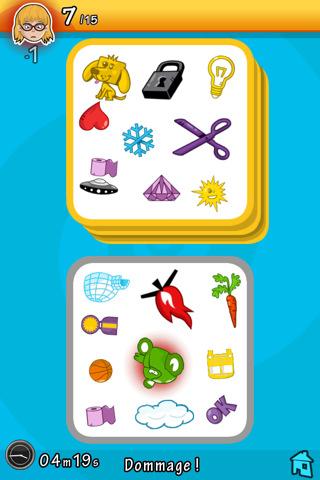 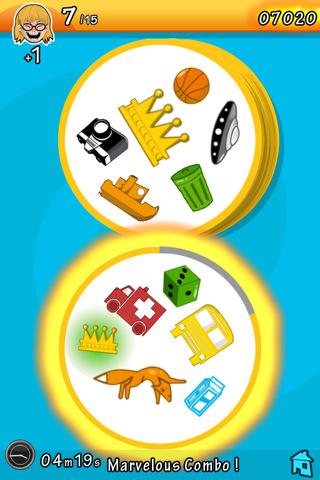 So it’s a perception game similar in style to Pictureka!, where the same images are resized, rotated, etc in order to make it not so easy to pick them out at a glance. Where they differ sadly, is in the value department. Where Pictureka! offers lots of variety in the game types offered, Dobble offers a few variations of a single game.

I remember being amazed playing Pictureka! at how they could send you searching for the same clues with different objectives, like having you search for snacks and search for things that are cold (ice cream would apply to both) as a way to constantly switch up your thinking while playing. Dobble on the other hand, just has you identify the matching pictures and call it a day.

There’s some reason to this, since Dobble is a real world card game adapted for the iPhone that’s for ages 6 and up. For the younger ones, you don’t need a ton of game modes and they’ll probably find a lot of enjoyment here. But for the rest of us it gets old fast to play the same mini-game over and over. Single player and duel simply isn’t enough to change it up.

It’s not that I didn’t like Dobble, it’s just that there isn’t enough of it to play. It feels like you’re being given the demo, and once you’ve checked it out and are hooked, you go looking for the rest of the game and are left wanting. After playing though a few rounds, you’re kinda just ready to move on to something else.