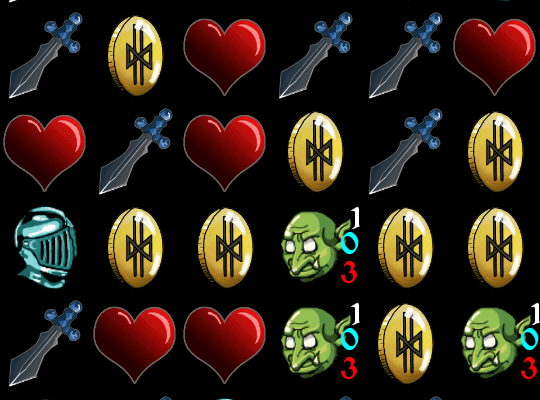 Looking for an extremely challenging match-3 game? Look no further than Djorick’s Curse.

Djorick’s Curse is a match-three RPG in which you’ll go spelunking through a monster-infested fantasy dungeon by drawing lines to connect swords, hearts, gold, armor and creatures of the darkest malevolence. That may sound familiar and with good reason, but aside from some possible balance issues, the game stands up pretty well on its own.

You’ll begin Djorick’s Curse by choosing to play as either a Warrior or a Mage with three different subclasses, each with a unique bonus like more starting spells or extra damage per attack. Warriors are sturdier and pack much more power in their punch, but Mages have access to a multitude of spells that allow them to do anything from collecting all the health or gold on the board to freezing enemies, erecting magical shields or hurling magic missiles at individual squares.

Once you’ve settled on a class, chosen your starting spells (where applicable) and a difficulty level, the game begins. Djorick’s Curse takes place on a Bejeweled-like game board, on which tiles representing physical attacks, health, treasure, armor and of course monsters fall from top to bottom. Gameplay is simply a matter of drawing a line through at least three matching tiles to undertake the desired action: three connected hearts to restore three hit points, for instance. The only variation is in attacks against monsters, which require one sword and one monster (but still at least three tiles in total); as long as they’re connected you can attack as many monsters as you like in a single turn, and the more swords you can connect in the attack, the more damage you’ll do.

But it’s a deceptive kind of simple. Things start off easily enough but it doesn’t take long before more advanced monsters with more hit points, higher damage ratings and even some special powers begin to appear on the board. The more that appear, the more damage they do, and it’s easy to be overwhelmed. You can run away but only once every 25 turns, so some caution is warranted when exercising the better part of valor.

Working in your favor are the spells, special attacks and abilities you pick up as you advance through levels. Every level allows two skills or spells to be acquired or upgraded, so you can boost your strength or hit points, improve a physical or magical attack or opt for a skill that might give you an edge when things get ugly, like collecting all the hearts or gold on the board in a single turn. There’s also a store where you can blow your earnings on a semi-randomized mix of better weapons, armor, magic rings or even a health or mana elixir when you’re really up against the wall. And the autosave function means you can take a break at any time, for as long as you like, and then come back to the action without fear of losing your progress.

Even so, it’s a very difficult game. I’m a newcomer to the genre but I’ve been around videogames long enough to have some credibility in the field, yet I was rarely able to get past level two – level two! – on normal mode. Even on easy mode, the difficulty curve seems to ramp up very sharply and suddenly, as both the number and power of monsters – there are ten different kinds, some of whom can poison you, reduce your maximum hit points or boost their own hit points to near-invulnerability if you ignore them for too long – jump very suddenly once you hit a certain point. When that happens it’s quite easy to find yourself reduced from full health to dead in just three or four turns. 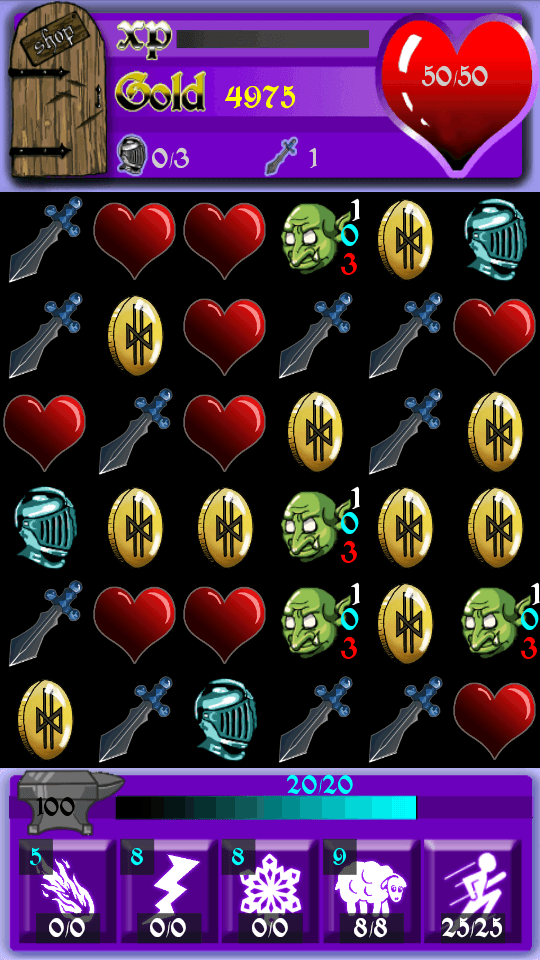 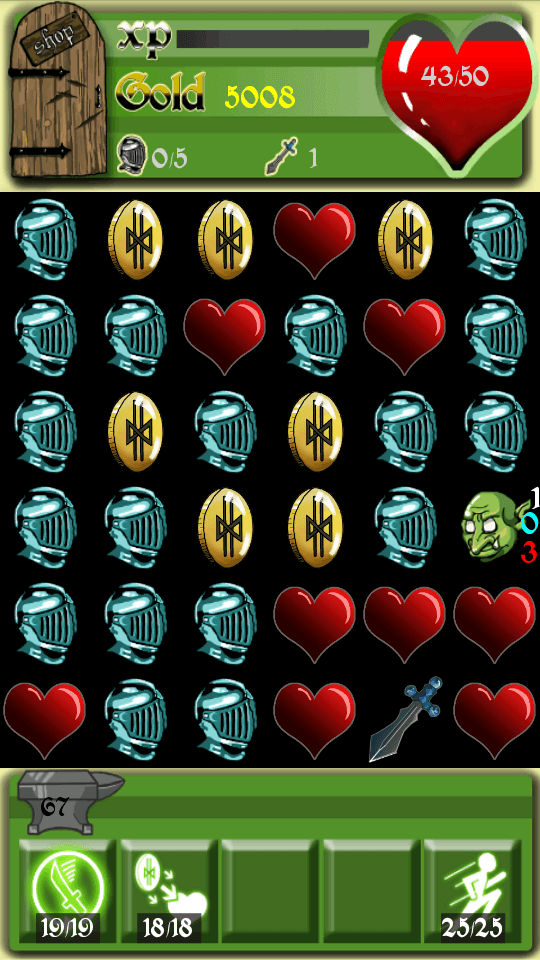 Some of those premature deaths are obviously attributable to bad luck – a few unlucky drops can leave you scrambling in any game like this – but it happens with such regularity in Djorick’s Curse that it had me wondering if perhaps something was wrong. According to the creator, who I actually emailed about it, the answer to that question is no; it’s just a hard game, and success requires a far greater commitment to strategy than to fleet fingers. He offered a few tips that did help my survival rate, slightly, but even so I’m still a “Two and Through” player most of the time, and I still find myself wondering now and then if I can really be that bad at this.

As a match-three game, Djorick’s Curse isn’t going to boast the most cutting-edge graphics ever but it nonetheless manages to look quite nice, with the exception of the font in the store, which is so dark as to be almost impossible to read. The controls are simple and accessible, and the music and sound effects are quite decent too.  And in spite of my annoyance with my inability to make much headway through the dungeon, I keep going back to it, because it’s a very playable game and one that I’m reasonably confident, making allowances for occasional bouts of misfortune, I’ll get better at with practice.

I’ve never played Dungeon Raid so I can’t say whether Djorick’s Curse is better, worse, or even if it qualifies as much more than a straight-up rip-off, but I can say that on its own merits, it’s pretty solid stuff. It may not be the most original game ever made and some players may find themselves frustrated by the difficulty and ever-present likelihood of sudden, unavoidable death, but there’s enough variety on tap, and enough variability, to keep it interesting and easily replayable.