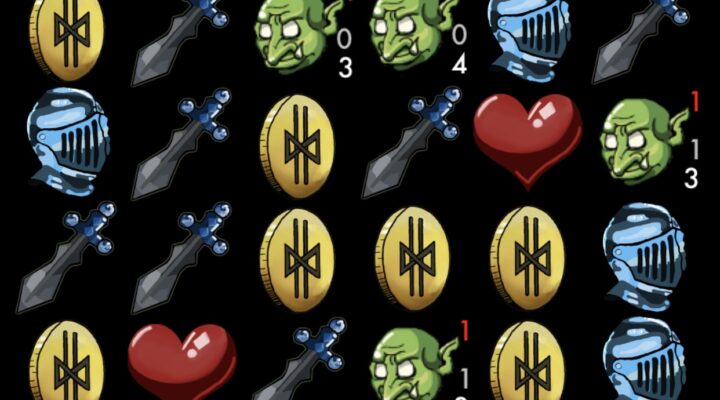 Djorick’s Curse isn’t the best looking game in the world. In fact, it isn’t close. It doesn’t explain itself very well, either, eschewing a tutorial for a help-section you need to find to figure out what you’re supposed to be doing. It isn’t the best start, but once you’re past it, you’ll discover a game that’s really easy to like.

At its heart, this is a match-stuff RPG. You’re drawing lines between symbols to clear them from the board. When they disappear, more drop down to replace them. The twist is, you’re fighting off monsters as you go.

Those monsters appear as tiles on the grid, and every turn they’re alive they’ll do some damage. You’ve got a base attack stat, and adding swords into the chain as you match the monsters will do more damage.

There are shields and hearts as well, and gold that you can spend in the in-game shop to get new equipment. You’ll level up as you play, unlocking new talents and skills that can help you out against the tougher creatures you’re going to come up against.

Monsters have their own skills, from recharging their HP to blocking damage to anyone standing behind them. It makes for a tactical, engaging experience as you figure out who you need to take out first, and how to do it.

You’ve got spells at your disposal too. They switch tiles around, suck up boosts, or let you leg it if things are getting too tough. You can’t rely on them, though, because they’ve got a turn-tracking cool down. When you die, you start again with nothing.

Djorick’s Curse is a smart distillation of a dungeon crawling RPG. There are stats to track, strategies to figure out and bosses to try and take down. This is one game you definitely shouldn’t judge by its cover – pick it up and give it a go.

Monster Breakout Review – Not Quite a Breakout