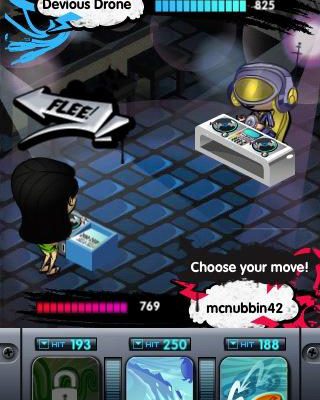 Nightclub City DJ Rivals is a one hit wonder

Being a DJ is a tough gig. You have to deal with unruly crowds, work late nights, and fight your way through a series of other DJs in a race to become the greatest. Well, at least that’s the case in Nightclub City DJ Rivals, a spin-off of the Facebook game Nightclub City that combines elements of social gaming with a more rhythm oriented experience. It’s sort of like DJ Hero meets FarmVille. And while the core gameplay is pretty solid, the game is ultimately far too repetitive to have much in the way of lasting appeal.
You play as a DJ, who, for reasons unknown will take on a series of missions to battle other DJs across the United States. There’s a bit of a story in Nightclub City DJ Rivals, that has you fighting bosses as you attempt to destroy the evil Bland Corporation. It’s pretty vague though, and not particularly interesting. And also, there’s time travelling, for some reason. 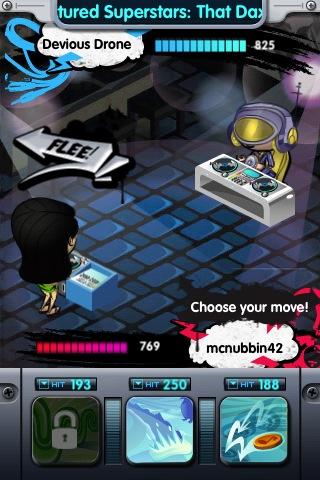 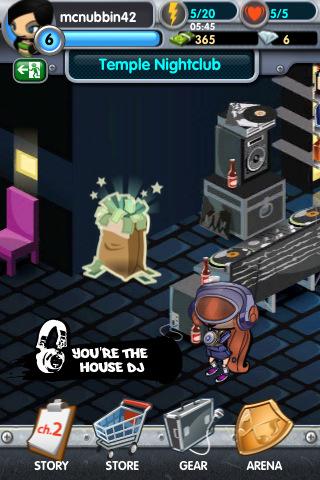 Once you create your avatar—and the game gives you a good variety of options there—you’ll set off on your quest to become the strongest DJ around. Or something. The main idea is that you can go into any building in whatever city you’re in and it will be housing several other DJs for you to engage in musical combat with. Your DJ Rivals, if you will. Selecting an opponent will take you to the rhythm battle sequence, which is easily the highlight of the game.
Here you’ll take turns exchanging blows with your opponent. When it’s your turn, you’ll play a mini-game that has you tapping along to the beat of whatever song is playing. The better you do during this brief sequence, the more powerful your attack will become. And the first person to run out of their health points loses. As you gain experience and cash you’ll be able to unlock new moves that become more complicated, but provide the opportunity to do even more damage.
The rhythm mechanic is fun, and becomes increasingly more challenging as you improve your move-set, but the main problem with DJ Rivals is that’s all you really do. You win battles, earn experience, and then fight in harder battles. It’s very repetitive and, to make matters worse, there’s very little visual variety. Pretty much every city looks the same, so it doesn’t even feel like you’re really making progress and exploring the country as a super cool DJ soldier. The only place where there is some true variety is with the soundtrack, which deftly balances between hip-hop and dance music, with a number of different songs that all fit the game’s theme very well. 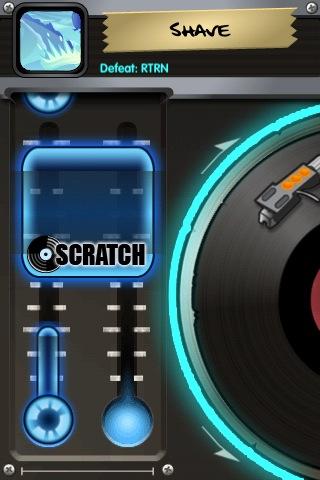 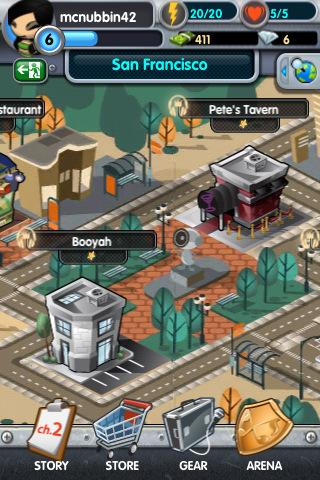 In addition to the rhythm component, DJ Rivals also has a number of features that are common to social games. There are quests to keep you on track, an energy mechanic that replenishes over time, items to collect, and premium content most easily accessed by paying real-world dollars.
DJ Rivals may look like a hip social/rhythm game hybrid, but in most ways it’s simply beating the same old drum. The great combat mechanic is largely overshadowed by repetitive play and the lack of any real incentive to push forward. There’s not much here to keep you playing in the long run, but it is fun while it lasts. But it ends up being a more forgettable one-hit wonder, instead of a smash hit.