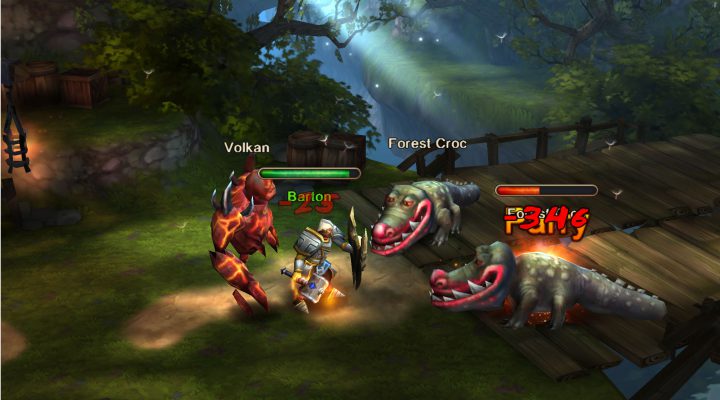 Lots to do, from missions to arena battles to guild wars to crafting.

All the combat is on autopilot, as in you literally don't lift a finger.

Kabam recently made a new hire looking to add more console quality gaming experiences to its portfolio. It’s unfortunate that didn’t happen before the release of Divine Might, a fantasy dungeon crawler that is ambitious in scope and looks pretty enough but asks so little of its players it could almost be played without paying attention to it at all.

While there’s nothing wrong with a dungeon crawler being mostly a statistical exercise, the problem is that in Divine Might, that’s essentially all it is. You pick a character from one of four classes and set him or her on the path to saving the land of Laia after its near brush with a giant skeleton being that required the combined forces of several deities to defeat. But like Arnold, he promised he’d be back.

The story is actually the best part of the game, as you’ll encounter all kinds of interesting characters as both NPCs and companions, though the latter conveniently always have to be somewhere else when the fighting starts. The graphics are also impressive, save for some occasionally wonky collision detection. This game never met an unintentionally half-buried treasure chest it didn’t like. 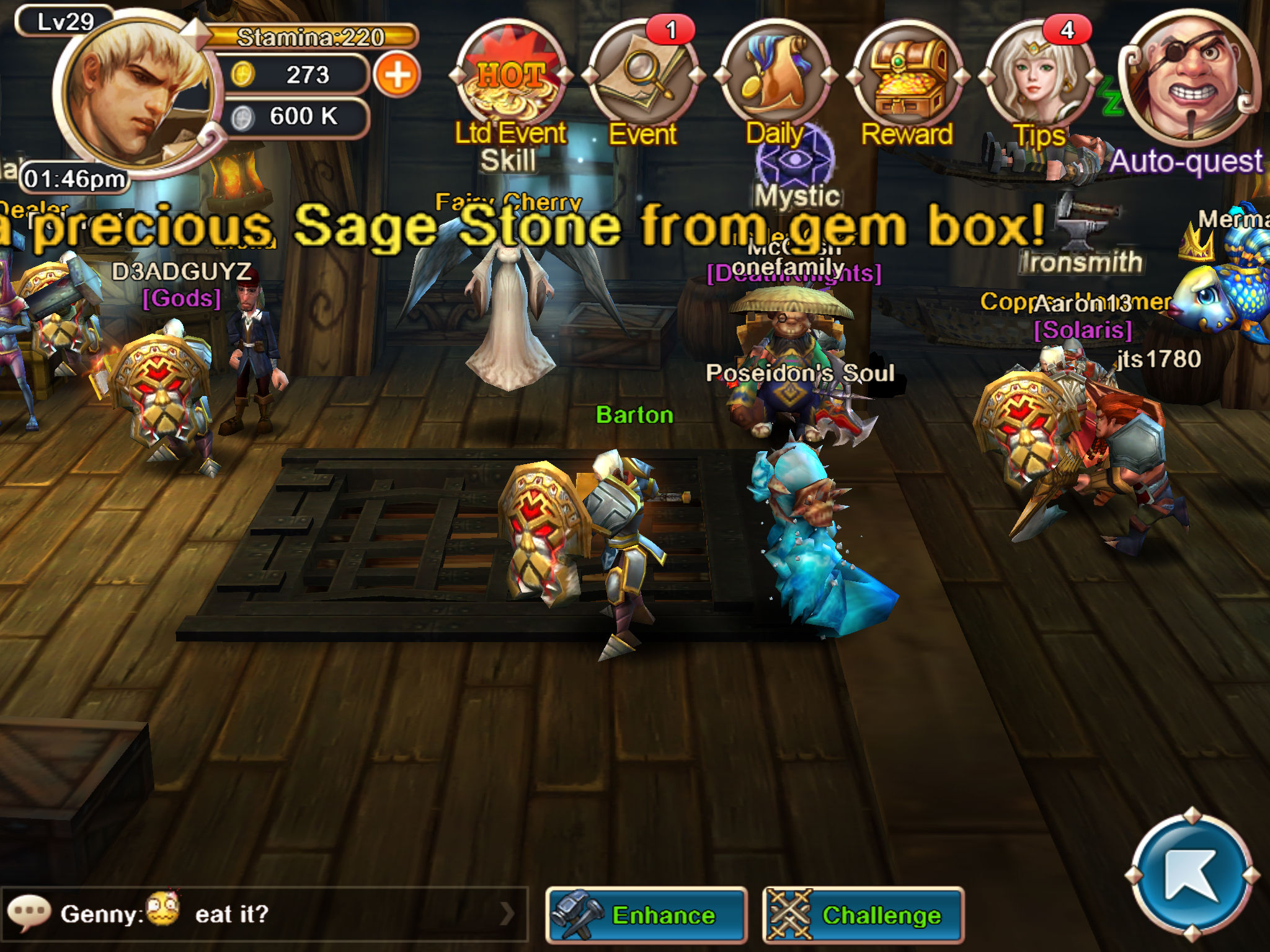 There’s also no lack of things to do, even if some time spent playing the game is required to unlock most of them. Along with the main story quests, there are side missions aplenty, gear to craft, an arena to do battle against other players, pets to collect and train and a host of ways to improve your character. You’ll also be able to join guilds and enter dungeons once you attain a certain level.

You know what we haven’t talked about to this point, though? The combat, because as silly as it sounds in a dungeon crawler, there really isn’t any. Within each mission, you simply tap to move along a predetermined path until you run into enemies, at which point all the fighting plays out automatically. If your character and pet are powerful enough to win, they do, and if they’re not, you lose. Once you learn some skills, there’s the thought that those might require you to tap the screen to activate or something, but it’s false hope.

Even in the arena, it’s much the same way. It’s like if you distilled the dungeon crawler  experience to a spreadsheet, except with pretty 3D visuals to set the proper fantasy tone. The one good part of the gameplay being on autopilot is the button you can hold down to run directly to the next quest or NPC you need to visit, though frankly there’s very little chance you’d get lost anyway. 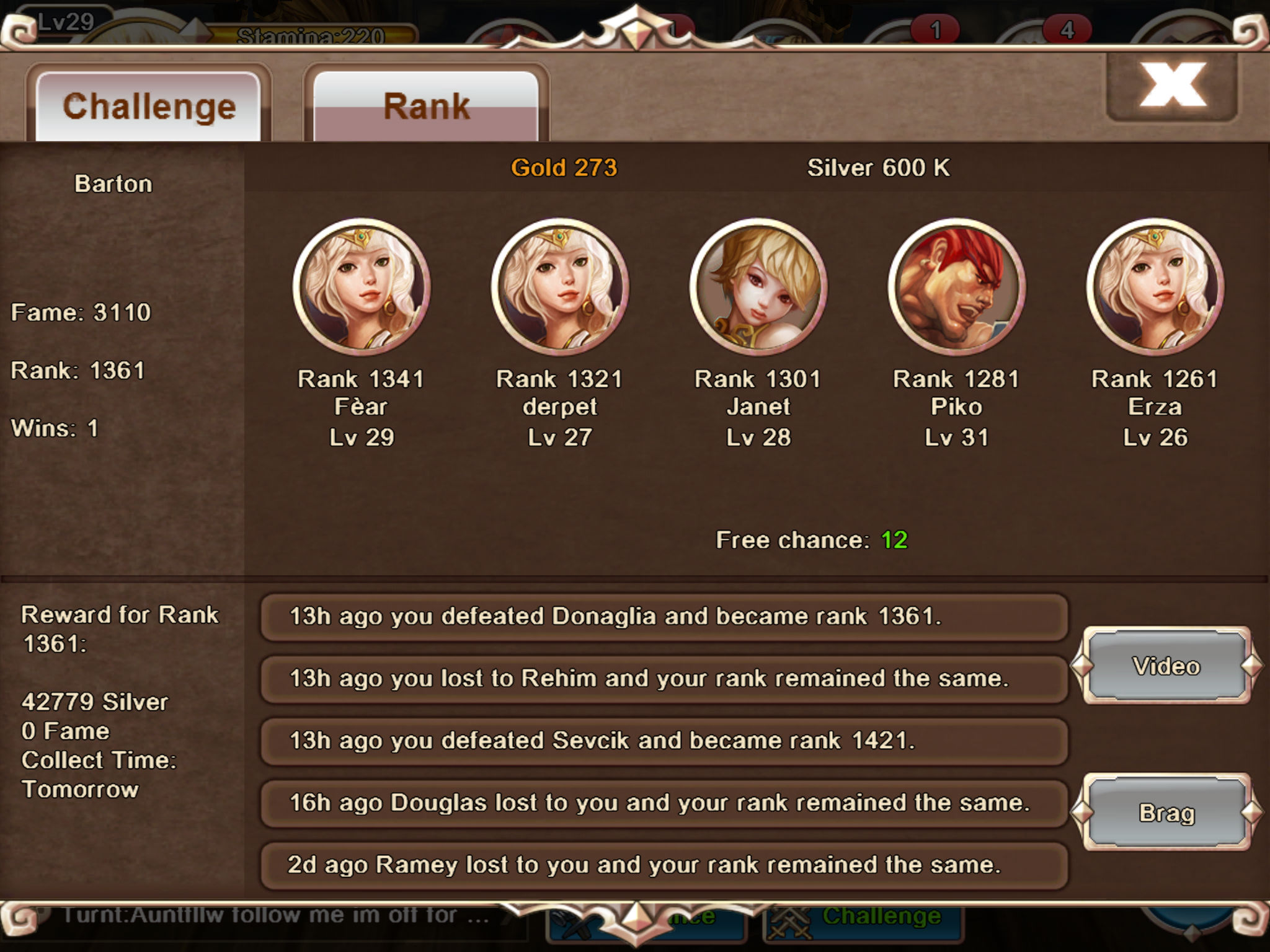 Divine Might is ostensibly part MMO, since there are shared common spaces and dungeons, but the lack of character customization options makes Laia a land full of clones. Players do change visually as they grow in power and attain new weapons and armor, but they all start out looking the same, and there’s not enough variety to make thins interesting at any particular point. If you’ve seen one Level 25 archer, you almost literally have seen them all.

If you enjoy the number crunching and min/max aspects of dungeon crawlers, this game is for you. Or if you ever played Diablo and thought that you’d enjoy it a lot more if it only you didn’t have to be bothered to actually push any buttons, this is probably exactly the experience you seek. Everyone else is going to wonder why there isn’t more game in the gameplay, and no amount of cute story or eye-catching graphics will be enough to make this any more interesting. Sorry about that.