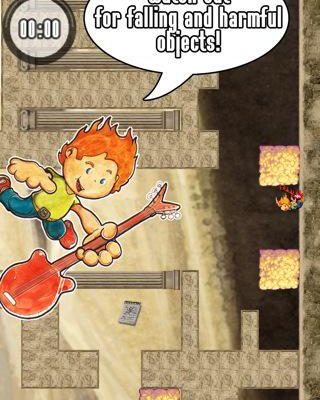 Falling down is easy. Being fun is hard.

There’s a lot of variety when it comes to puzzle platformers on the iPhone, but Disoriented! is one of the most unique ones to hit the App Store. As opposed to other such titles on Apple devices, this doesn’t have players run, jump, or fly in order to get to their desired destination. Instead, it requires them to fall. In many ways the game is a triumph, but it isn’t as much fun as it should be.

There’s actually a simple, charming story in Disoriented!. A group of students fell into a portal that deposited them into a world filled with wonky, changeable, gravity. Players have to guide them (via freefalling) to magical doorways, while helping them collect their backpacks, homework, and textbooks along the way.

Levels are short, fast-paced things that usually start off with a character dropping out of the sky. In order to change direction, the phone needs to be flipped around; gravity is always down, and there’s a tap control option that lets players direct the direction a character will run in if they happen to be standing on a platform.

After the first few levels, hazards like buzz saws and spikes start showing up. Players have to avoid these and not fall off the edge of the map. Eventually gravity-controlled barriers start to appear as well, and players will have to twist their iOS devices to move them out of the way. 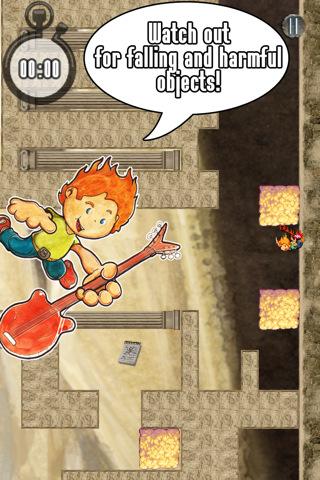 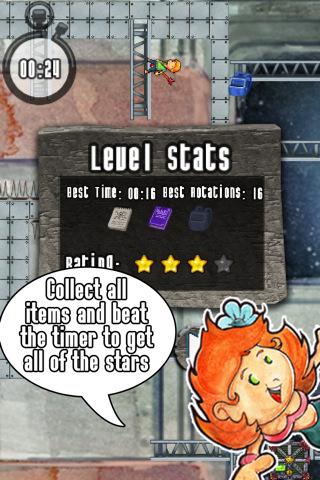 While this is certainly a clever play idea, it’s just not a lot of fun. Instead, constantly twisting the iPhone around gets kind of irritating. Also, speaking as someone who played this game in public: it’ll garner more than a few odd looks from bystanders.

Visually, Disoriented! is a very cute game. No level features the same design or art, so things often feel fresh. The general illustrative style looks like it’s a pen-and-ink/watercolor combination, which is actually pretty charming. There’s even a level that’s filled with platforms that are made from penguins.

The sound is nice, but nothing special. Sometimes the music that randomly appears in a level feels kinda mediocre. The game also lacks an option to play your own music in the game.

Disorineted! also offers a great level design tool that allows players to create custom maps, which they can share with the designers for possible inclusion in future updates. At the moment, it actually feels more fun to create custom levels than it is to play them, but the developers at Vortex Games should be patted on the back for this inclusion.

So here’s the problem. Disoriented! is well-made. It’s also clever and, in several ways, charming. But it’s not really fun. This is one of those titles that feels like it should be more enjoyable than it really is, but being technically flawless just isn’t enough to give it a hearty recommendation.