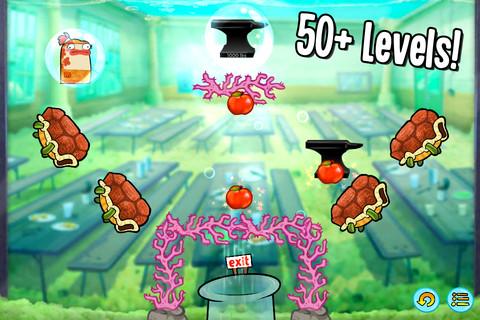 Disney’s new app is well worth a free swim

In a matter of months, Disney has morphed from a ‘very strong’ presence on the App Store into what could now be debated as the ‘number one strongest’. While their original adventure, Where’s My Water?, continues to perform well on all devices, their addition of the licensed spinoffs Where’s My Perry? and Temple Run: Brave have kept them at the front of the pack throughout the entire summer.

With Disney Fish Hooks, we have a new Disney franchise on the App Store. And while it’s definitely not as robust or deep as Disney’s other recent franchises, it’s also completely free.

Your entire adventure revolves around a very important facet of life: bragging rights. While Randy Pincherson the crab declares himself the greatest bubble traveller in all of the fish tanks, it’s up to the equally cocky Milo to prove that Randy is mistaken. With an incredible shiny trophy as the prize for victory (and eternal servitude to Randy at stake for a loss), you had best help Milo dig himself out of the hole he’s created.

While there’s no mouth animation to accompany the characters, the plethora of voice acting and motion throughout the game should be enough to please any fan of the show. While the in-game graphics certainly won’t wow you, they’re smooth, colorful, and faithful to the design of the original cartoon. 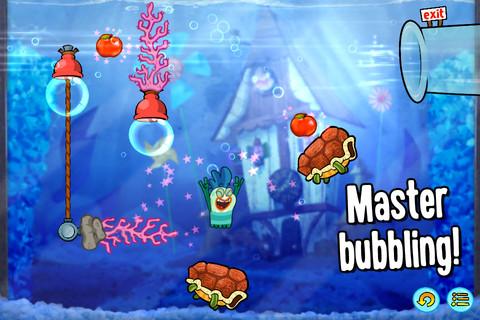 Gameplay is physics-based, and revolves around the creation and popping of bubbles. With the usual goal of “collect the three objects across the stage and reach the exit for the best score”, fans of Cut the Rope should be perfectly familiar here. By tapping your main character, you surround him with a bubble that travels vertically, while tapping him one again will pop him downward. In addition, tapping anywhere on the screen can create an external bubble that can alter the environment around you.

In most cases, these secondary bubbles will solve environmental puzzles by lifting objects around you, such as creating teeter-totters by putting horizontal platforms off-balance, or by raising deadly coral so that it doesn’t damage our hero. There is an occasional introduction of new elements across your adventure, such as currents, whirlpools, and coral-crushing anchors, but the main gameplay remains fairly consistent.

With five different stages consisting of about 10 levels each, this is a fairly deep title for a free game. At the end of each stage, you’ll have an opportunity to save one of your classmates as a playable character through a mini-game. These range from shooting basketballs to preventing the bully Jocktopus with an anchor to the head, and they’re all fairly fun. 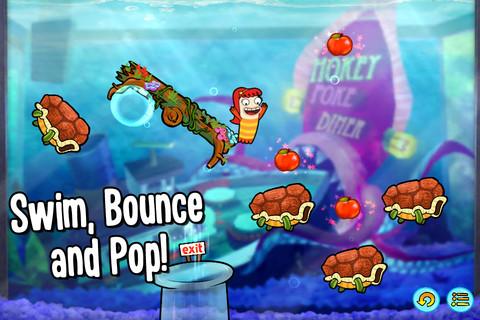 The only thing that might sink your experience with Disney Fish Hooks is how easy it is. While there are plenty of stages that might force you to multitask with different bubble assignments, physics puzzle veterans should have no problem completing all 50 stages the game has to offer in less than an hour or two. There’s a little extra replay value in collecting all three apples in each stage (this game’s equivalent of stars), but it’s still not going to last the dedicated gamer any more than a day to complete.

But honestly, the replay value can be forgiven; Disney Fish Hooks succeeds in just about everything it set out to do. It provides a quality product that extends the Disney name, it’s faithful to the show, and it’s completely free. Sure, it’s an advertisement, but it never seems to push that fact in your face, and it’s a notch better than most paid physics puzzlers on the app store right now. If you’ve got time to blow and an itch for a fun puzzle game, Disney Fish Hooks costs nothing but your time, and will never ask for a penny more.