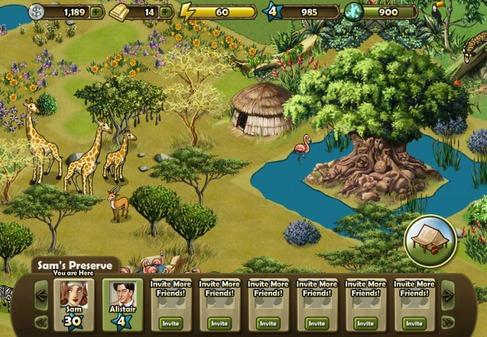 Disney Animal Kingdom Explorers is a good HOG, but a few flaws keep it from being truly lion-hearted

Most hidden object games (HOGs) trot out hunt-the-item scenes that look as if a tornado hit an episode of Hoarders. Explanations for the mess are rarely offered, either; you’re just supposed to assume that the dead/murdered person who owned the house (since that’s almost always the premise) liked to collect junk. But Disney Animal Kingdom Explorers for Facebook does something a bit different: it asks you to search through beautifully-drawn crowds of animals that are clustered on plains and around watering holes. It’s a fun experience for animal lovers—and it’s educational!

Disney Animal Kingdom Explorers is a HOG by Playdom. If you’ve played Gardens of Timeor Blackwood & Bell Mysteries, then you know how game works. You follow the story via hidden object scenes, and must find lists of items to find in a whole lot of clutter. Though Disney Animal Kingdom Explorers still has its “Huh?” moments as far as its hidden object scenes are concerned (“Why is there an argyle sock stuck in a tree in a traditional African village?—Eh, we’ll just say ‘poachers did it.'”), most of them are a joy to look through, provided you love animals. You’ll explore elephant plains, the frozen arctic, rainy water holes, waterfalls populated by exotic birds, and more.

What’s particularly commendable is the way Playdom managed to shoehorn education into Disney Animal Kingdom Explorers. You probably know what a hornbill is thanks to The Lion King (hint: Zazu), but are you familiar with caecilians? How about red-tailed monkeys? How are you supposed to search for something if you don’t have any idea if it’s a bird, a beast, or a rock?

You educate yourself. Every animal on your “find me” list has a question mark beside its name. If you click on the question mark, you get a picture of the animal and a brief run-down of its habits. Of course, clicking on question marks slows down your progress (and like most HOGs, Disney Animal Kingdom Explorers rewards you according to speed), but it’s worth it. An education lasts a lifetime—right?

Disney Animal Kingdom Explorers‘ strength is its hidden object scenes. By comparison, building a wildlife preserve is a little dull at times. It’s fun to look up and place animals in your preserve (and in a nice nod to the Circle of Life, you gain more experience if you put animals where they’d be happiest—specifically, you should put herbivores near their favorite food source and not beside the lion den), but the animals are a bit dull-looking compared to their brilliantly colored counterparts in the hidden object scenes. Also, they’re stiff. They occasionally graze, roar, look around or twitch their tails, but it’d be nice if they actually walked around more. 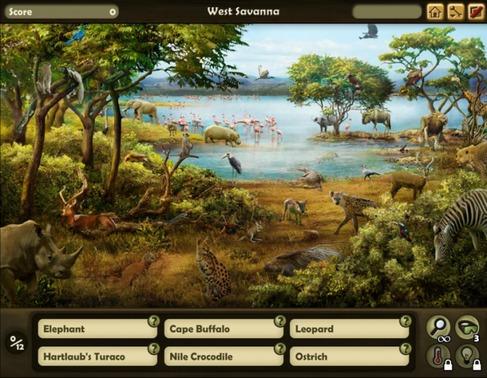 There is also the issue of microtransactions. “So what else is new?” you might ask, but Disney’s Animal Kingdom Explorers is a little more aggressive than usual about asking you if you want to buy more of this, or more of that, or more energy, or speed up the construction on your lion habitat. A free-to-play game needs to solicit a little cash, sure, but Disney Animal Kingdom Explorers was designed especially with kids in mind. Given the game’s educational value, the constant prodding feels especially icky.

Taken as a whole, however, Disney Animal Kingdom Explorers is a good HOG. It might feel too familiar for veterans of the genre, but animal-loving kids will find it more fun than a barrel of red-tailed monkeys.