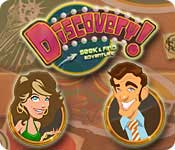 Wheel! Of! Discovery!! Travel inside a game show complete with a wheel and showcase-like sets that take players around the world hidden object style with Discovery! A Seek and Find Adventure. While Jim Summers explains the rules and keeps the game on track, Jill acts as a human GPS pointing out hidden objects when you need a hint.

Like Hidden Expedition: Everest, you’ll compete against others. But instead of two other teams, you compete against two contestants for a chance to win fabulous trips to Australia, Brazil, China, Egypt, France, and Spain. Ok, so you won’t be winning any real trips, but at least you do a little traveling through the beautiful scenes representing the country up for grabs.

Kick off the game with a spin of the wheel to assign a dollar value to the found objects. Play classic mode and hunt for objects in the scenes for several scenes. Make a successful match and an audience applauds. The game awards bonus points for quickly finding multiple objects. The second round dives into the mini-game, followed by a Scavenger Hunt in which you find a category of items such as tools, animals, or toys. The third brings on another mini-game before going back to hunt for objects, and the final three rounds go through two scenes of Classic mode and one of Category Mode.

Two red and green buttons appear next to every object. When each one lights up, this means a competitor has found the object. This makes for a panicky game at first, but you’ll learn to ignore the buttons after a while. At least, until the Champions Tourney where opponents find objects much faster. Or, you can switch to Relaxed Mode to take away the stress factor.

The color-coded wheel also dictates the mini-game that gets played. Red sends you off on the Price Tag Challenge, a memory style game except it has a twist. Price tags come in two sizes: The large tags don’t have a pair until you match the corresponding smaller pair.

Green takes you on a Scene Match Safari. Two identical scenes – except for a handful of objects – appear side-by-side. You drag and drop objects to where they belong to ensure they match in both scenes.

How much trivia do you know? Spin the wheel and land on blue for Trivia Takeoff for five questions. If you miss the question, the game ends and you lose the money. You can keep the money you’ve won rather than answer the remaining questions.

Finally, you can win some dough with Blizzard Bucks whenever you land on gray. You’ll have 15 seconds to click the falling money like crazy to grab the cash. We played the entire game only to land on blue once and on grey exactly zero times. The odds are in favor of the Price Tag Challenge, which we play too many times. You can play minigames anytime once you unlock them. The same goes for the countries. After unlocking a country, you can return there for Gauntlet Run where you can seek every object in that country.

After finishing a game the winner (usually you) goes on to the Jackpot Round, a five-minute U.S. Road Trip through six cities including New York, New Orleans, Hawaii, Las Vegas, San Francisco, and Hollywood to find one object in one scene at a time. Find the object or click "Pass" to move on, the game whisks you to another city to find another object.

Supposedly, players can compete against 20 contestants, but this isn’t clear. The same two contestants seemed to play every time. Then the champions tourney has six contestants. At the start of the game, 20 avatars are available for the choosing and six locked avatars wait for an unlocking.

Between rounds, Jerry says, "Stay tuned for more Discovery." Instead of commercials, the game presents a fact about the country up for grabs. Cute, but we could do without it because it slows down the game. At least, the soundtrack keeps up the energy and makes great background noise that you don’t need the TV.

A few nitpicks: Category matches creates a frustrating experience at times. For example, the sporting equipment category approves a flashlight, but not a boomerang or chess board. We clicked on the bike a few times only to see a nasty "X." We give up, ask for a hint, and see the bike selected. Hence, our frustration with clicking objects not always working. It doesn’t happen most of the time, but more than the standard hidden object game.

"Shell" appears on the list of items to find, so we click a peanut shell. Nope. Grr. The scenes and object placements change very little, if at all. A few rounds of the game and we know where to find things. Play long enough and eventually new objects will appear in the list to keep the game going otherwise it turns repetitious after winning trips to all six countries and the Champions Tourney.

Many scenes contain animation. Whether lights flickering or fireworks flying, these disrupt the players concentration to make it harder to find objects. It would be nice to have the option to turn off animation.

Seasoned hidden object players complaining that games are too easy should find a match in Discovery! A Seek and Find Adventure, but the game is acessible to more players thanks to a Relaxed mode available. Game show lovers will love being able to spin the wheel and shout "Big money!"