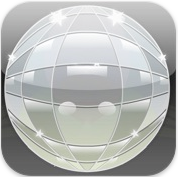 DiscoTech is a fun party that’s over far too quickly

We’ve had ball-based platform puzzle games for quite some time now. In them, we’ve used everything from marbles to encapsulated monkeys (a phrase you might never expect to type). It finally took develop D7 to realize what was missing: a disco ball! Too bad that the result, DiscoTech is missing a fair bit itself.

Similar to a Super Monkey Ball or Marble Madness title, DiscoTech has you tilting your iDevice to roll a disco ball through 15 levels to get to the end as quickly as possible. Three of those levels are boss battles against another disco ball, featuring a repeat-the-pattern battle.

DiscoTech uses the 70s disco theme to its fullest. The levels all feature funky neon lighting and colors galore. The boppin’ disco beats that back up the action are very well done and are sure to bring a smile to anyone who likes the musical stylings of KC and the Sunshine Band. The levels usually feature designs like a guitar or huge disco floor.

Along the way you’ll encounter all sort of traps and switches, like warp portals or beams that instantly send you back to the beginning of the level. You can also control the camera from three different viewpoints, as well as having full zoom and rotation controls so you’ll never miss any view of the action. You’ll also be able to grab a spinning disc which unlocks a different skin for your ball. Finally, you’ll be able to compete against developer times for gold, silver or bronze medals.

The problem? That’s everything DiscoTech has to offer.

DiscoTech is extremely short. You’ll be able to unlock every level in well under an hour, and other than gaining medals, there’s no real reason to return. The “hidden” discs are quite easy to find, and while the designs are pretty cool, they don’t add anything to the gameplay. There are no extra modes in DiscoTech – not even an online leaderboard to compare your times with anyone else.

It’s a very tiny package, but a well put-together one. DiscoTech begs to have a massive update with more levels, themes and gameplay additions. It’s got a really great premise, taking advantage of a fun and woefully-underused theme. But as it stands, it’s a short title that’s merely a distraction. And debuting with a 99 cent promotional price, one wonders how much they really want to charge for something so small.