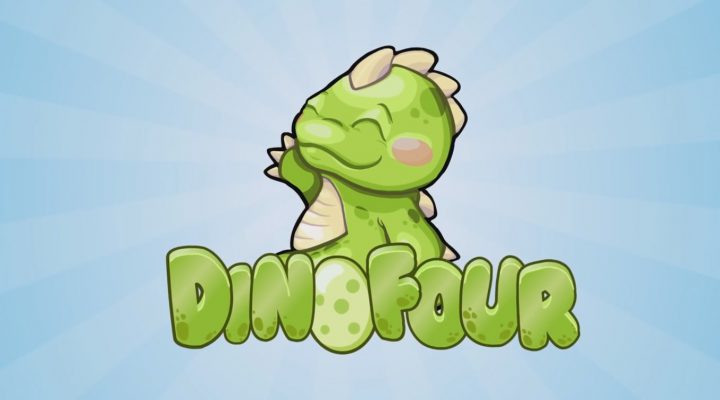 Tons of variety in stages, obstacles, and dino abilities.

Great replay value for completionists, including both star ratings and hidden golden eggs.

Lots of loving retro tributes, from the pixel art to a song obviously inspired by Super Mario World.

Timed obstacles and controls themselves cause slowdown in what should be a fast-paced game.

Lots of trial-and-error hazards that can only be avoided via luck or repeated dying.

Lacking some useful information, like the time required to get 3 stars on stages.

Dinofour is a charming puzzle platformer with an engaging dino-swapping premise and a generous amount of variety across its many stages. While it stumbles slightly in execution, it’s difficult to not be drawn in by the adorable protagonists and the amount of heart that went into designing their world.

Dinofour’s story is whatever you’d like to make it; its level-based worlds are not prefaced by any cut scenes other than a dinosaur in an airplane. Its objective is always the same: get any of your four controllable dinosaurs to the egg goal located somewhere within the stage. While we would have enjoyed seeing the colorful, pixelated dinos act out some sort of plot, the lack of a story isn’t really negatively felt. The focus is on the stages themselves and the gameplay that will take you through them one by one. 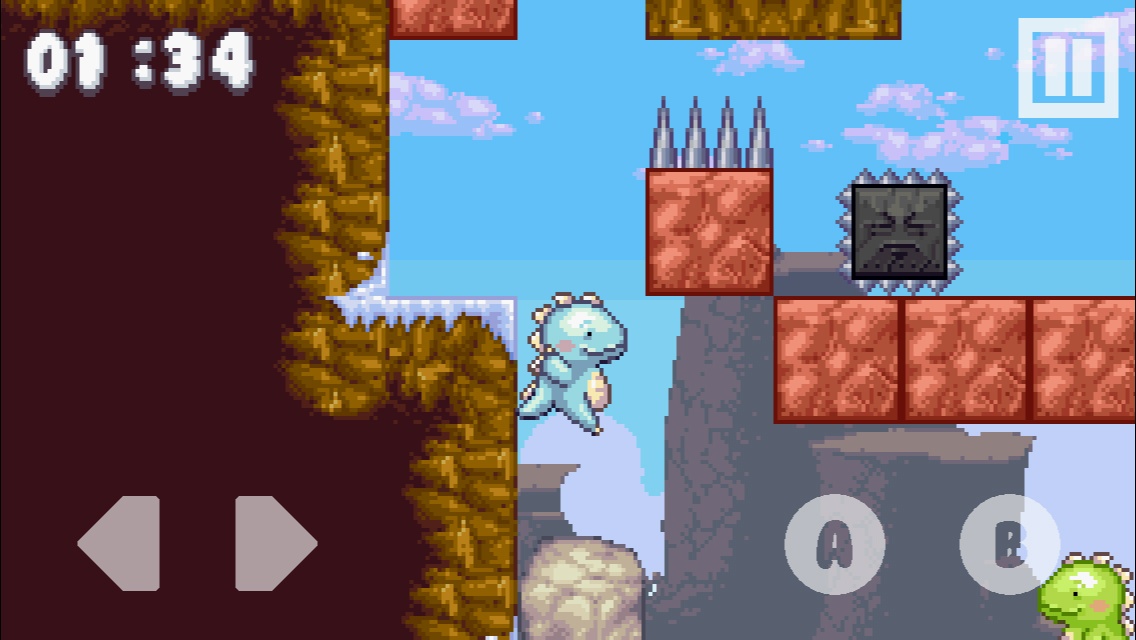 That gameplay involves trekking your dinosaurs from point A to point Egg via any means possible. Each of the 72 self-contained stages is set up differently: some are designed like a standard platformer, progressing linearly from left to right. Others will have your dino traveling straight up, down, or a combination of directions as they open up new paths and avoid obstacles. You’ll often have to backtrack to switch dinosaurs or enter a door that was previously closed, which adds a touch of pre-planning to the puzzler aspect.

Your dinosaurs have limited mobility and are able to move left or right and jump one block’s distance up or sideways. In addition to these shared basics, each of the four dinosaurs has one special ability unique to him alone: Green can push heavy objects, like rocks; Red can breathe fire to melt ice or barbeque enemies; Blue can fly for short distances; and Purple can reverse gravity, allowing him to switch between walking on the floor and the ceiling. 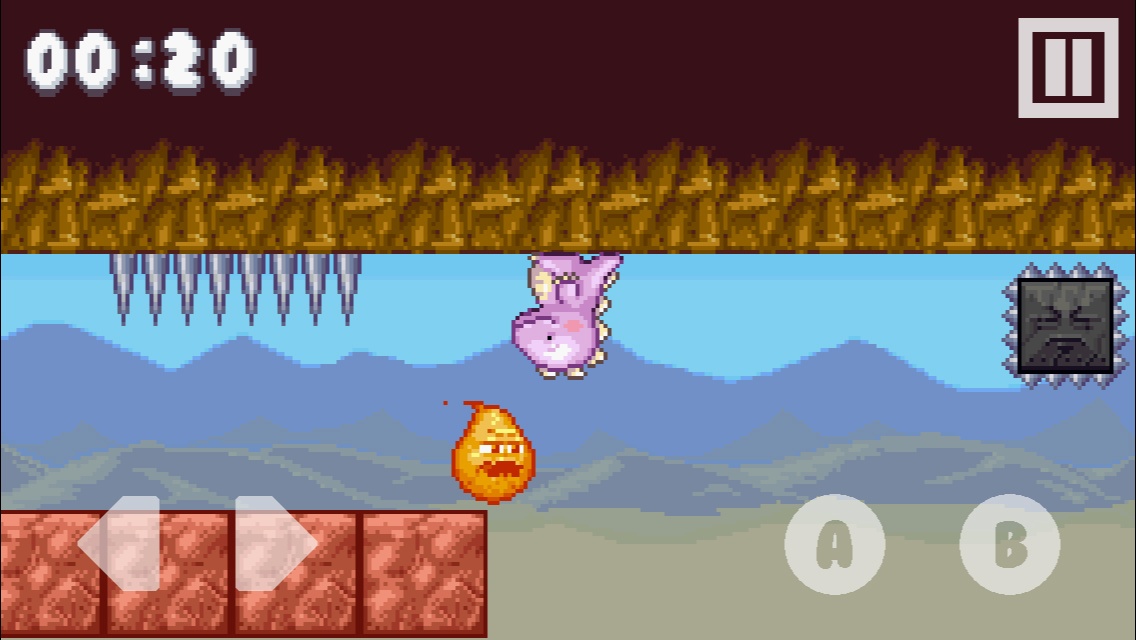 Most levels will require a combination of these talents to access the egg, and since you can only control one dinosaur at a time, you’ll need to locate your colorful friends within the level and swap control by standing next to them. This leaves your original dinosaur in place and puts you in charge of whomever you just switched with, along with their related ability.

Dinofour does a fantastic job utilizing all four of its dinosaurs and making each feel critical to the game. Some levels focus on a single dinosaur—such as Red within an ice-filled maze—but most feature two or more and the talents each bring to the table. You may start off by Green pushing a rock onto a button that opens the door to Red, who burns ice blocks so Green can move another rock to allow Blue to use it as a launching pad to a higher area with the egg. While all the dinosaurs utilize the same basic controls, playing as Blue or Purple introduces new movement options, adding variety to the gameplay. 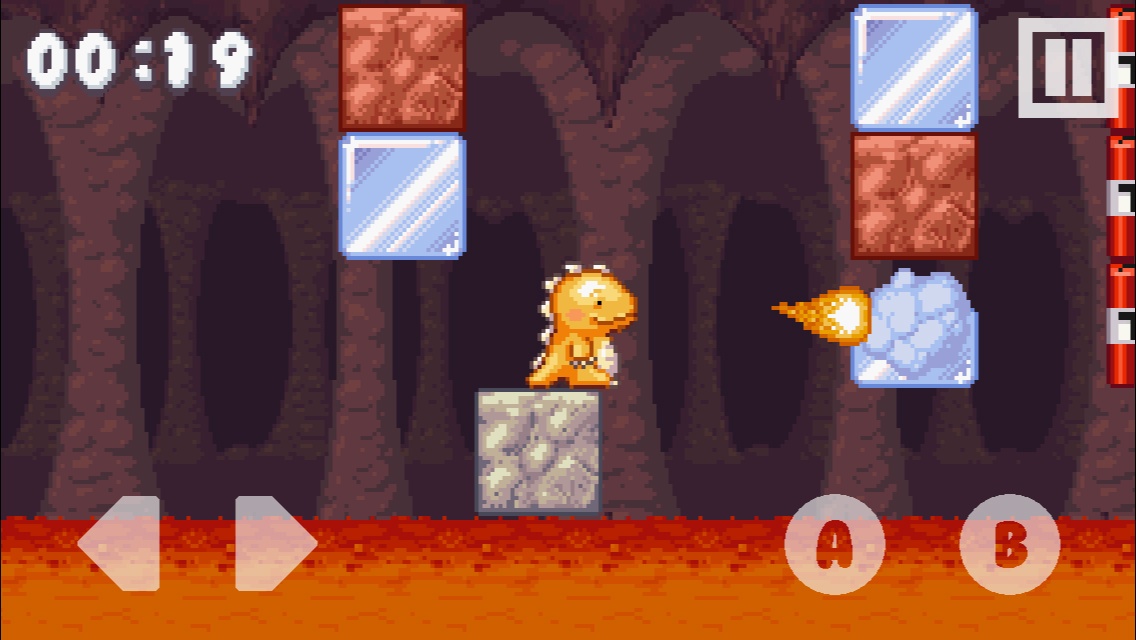 Further adding to that variety are the wide number of obstacles your dinosaurs will face in their travels. Spikes and pits are common occurrences, but you’ll also run into charging boars, hovering pterodactyls, explosive blocks, dripping acid, crumbling bridges, timed doors, and plenty more. Although you’ll face the same hazards repeatedly, no two stages feel alike thanks to the different combinations and layouts developer CRAIGEATSCRAYONS has designed.

Unfortunately, despite having unique and interesting levels, Dinofour often forces you to approach them in frustrating ways. To begin with, the game favors retro trial and error difficulty, where you’ll have to jump blindly into an area and hope you don’t hit a deadly object below. Numerous stages are set up with long drops containing spikes and only a small area of safety, yet the only way to know the location of this safe spot is to die and try again with new knowledge.

There are also a significant amount of time-based obstacles that force you to wait—including scrolling blocks, retractable spikes, and patrolling enemies. While this is a common feature in platformers, their appearance in almost every stage greatly slows down the gameplay, resulting in just as much time waiting as playing. It doesn’t help that many of these timed obstacles seem off-timer to begin with: for instance, you’ll begin a stage right next to a set of retractable spikes that are up when you reach them, forcing you to stop and wait for no real reason. If these objects were more in sync with the rhythm of the player, the levels and experience would flow much more smoothly.

The other major issue is that everything in Dinofour seems just a touch slower than it should be. Your dinosaurs’ movement always feels a bit sloggy; the star rating at the end of each level is slow to populate; and certain events that you would expect to be faster—like walking on ice—sometimes actually halt your dinosaurs’ movement, slowing them to a crawl. In a game that awards stars based on speed of completion, these little hiccups are a repeated source of frustration. 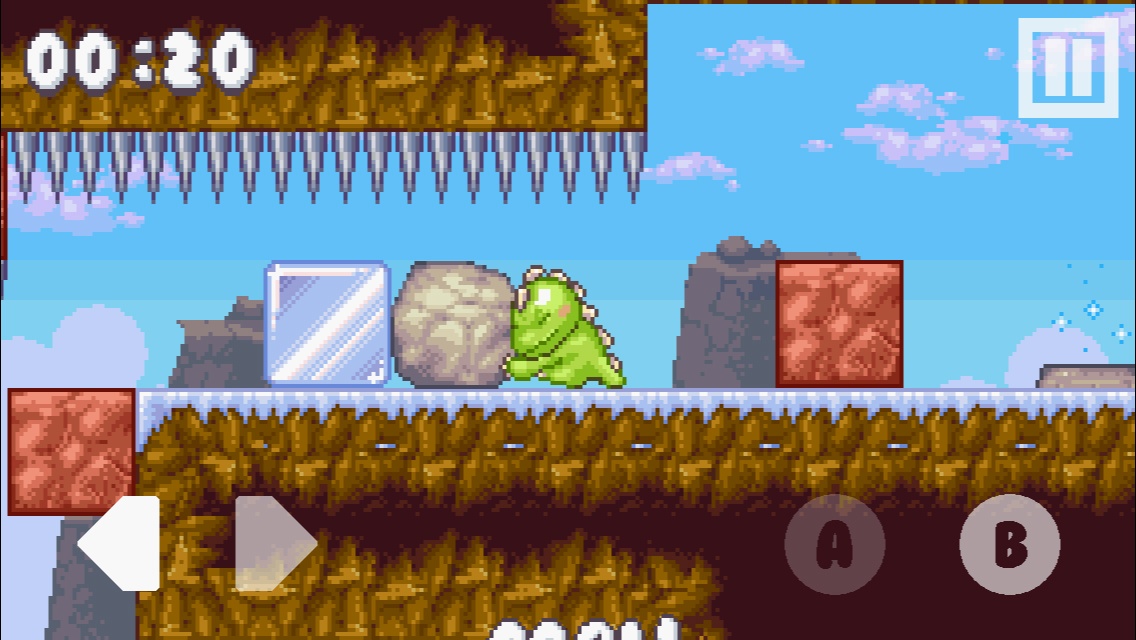 But on stages that don’t rely on these specific slowdowns, Dinofour shines. The dino troupe is strongest in their more puzzley stages, when figuring out the best order of dino-swappage is more important than timing a jump just right. As a platformer, Dinofour is a strange combination of relaxing, open-ended level exploration and infuriating precision difficulty. As an experience, it’s a lovable adventure that will make you say “aww” as much as “aww, man!” If you can accept the aggravating with the adorable, there’s a lot to enjoy here.