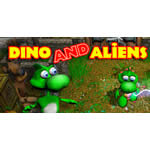 You just can’t tell a book by its cover or, in this case, a game by its graphics. What looks like a kiddy action game at first blush turns out to be a quite entertaining puzzler for the whole family. Go figure.

Maybe it’s the opening sequence that had us bamboozled. It starts with Dino — the cutest little green dinosaur you ever did see (who wouldn’t have lasted a minute in Jurassic Park) sitting at his keyboard, pounding out the game’s jaunty theme song. He’s surrounded by a 3-D landscape of yellow sunflowers, green vegetation, and falling petals. And just in case you missed the fact that all of this is in glorious 3D, the camera keeps moving to make certain that you admire the work of what must be very proud game developers indeed. Most casual games don’t look this great, we must say.

But Dino’s little Garden of Eden is in danger, we’re told. While some have theorized that the dinosaurs were brought to Earth by aliens, apparently — at least, according to this game — that wasn’t so. Here we learn that an alien-filled flying saucer came to earth a long, long time ago to trample the land where Dino lived, and that it was our hero who fought back “in a great battle.” This game is that great battle.

In each level of Dino, the goal is to vaporize each and every alien, and then escape by transporter to the next level. Since there are four types of aliens — fork-stabbing types, snipers, heavyweight boxers, and electronic-cannon-wielding ones — some are considerably more difficult to dispose of than others. To do that, Dino has various bombs at his disposal — ones that are operated by remote control, others that bounce, and so on — and he can also make himself invisible for short periods of time. When worst comes to worse, he can kick his enemies, too. Various power-ups can increase his health, and objects like batteries, mirrors, barrels, and laser beams can be manipulated to serve as weapons.

While the graphics are truly sensational, occasionally the ones you need to see aren’t visible on-screen. For instance, aiming a laser cannon at an alien can be quite a trick when the weapon is on the left-hand side of the screen and the alien is standing so far to the right that he’s off-screen. Fire away! Did you hit him? Who knows? You may need to pan to the right to find out. Very odd.

Quirky graphics aside, the real challenge is to use whatever is on hand at the start of each level to wipe out the baddies; in some levels ammo is plentiful, in others you may have just one — or maybe no — bombs and it will take a clever gamer to determine how to make do.

But be careful. Dino may be a dinosaur, but he’s just a tiny one and one laser blast or a few alien punches will send him to dino heaven. Sure, you can start the level from the beginning again without penalty and the game isn’t timed so you can take as long as your heart desires. You can even view an instant replay of the level to scope out where you went wrong. But we found that trying to solve the same puzzle over and over again quickly became tiresome.

Dino & Aliens begins appropriately enough with an instructive 3-level tutorial and then follows with four episodes, each containing 5-15 levels. If a level proves too difficult, you can switch to a different level within the episode, but there’s no graduating to the next episode until you’ve finished all the levels of the previous episode. That can prove to be a problem for, if you’re stuck on the last level of an episode without a clue as to how to solve the puzzle, it’s game over for you. No hints, sorry, nosiree.

Are the puzzles too difficult? Uhhhhh, well, how clever are you? Some gamers may find a few too daunting; others may move through this game like greased lightning. Let’s just say we found them to be a nice mix of easy and difficult. You may or may not agree. But it’s sure a lot of fun trying to decide.