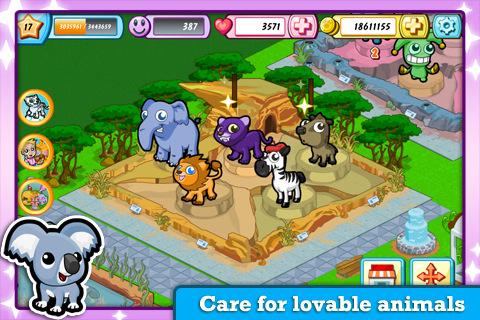 Flo is about as multi-talented as a person can be. She’s helped run restaurants and hotels and even catered a wedding or two. And, for some reason, that experience makes her qualified to run a zoo, as well. Or maybe it’s the fact that running a zoo in DinerTown Zoo is so ridiculously simple that anyone is qualified. Either way, Flo’s debut in a social-style mobile game doesn’t reach the level of quality that the DinerTown series is known for.

Unlike most games in the DinerTown universe, there’s no story here. How, exactly, did Flo come to be in charge of a whole zoo? I guess we’ll never know. In fact, not only is there no story, but there’s also very little to make this feel like a DinerTown game, aside from the name and the main character. Don’t expect to see any familiar faces or locations.

Gameplay-wise, DinerTown Zoo is a very basic business management game. You can buy different habitats, that can house everything from marine animals to space aliens, and then purchase animals to live in them. You can upgrade the habitats to hold more species, and each animal will dole out cash at pre-determined intervals. You can also, of course, purchase decorations and facilities to make your park more attractive, and there’s a simple quest-system that gives you goals that involve buying new stuff. And as you gain experience, more items and animals will unlock.

And that’s about all there is to it. You come to the game, collect money, and once you have enough you purchase the next goal-related item. Rinse and repeat. It’s plain and dull and the only thing else there is to do is pick up garbage, which isn’t exactly fun. Progress is also tediously slow, as many of the animals and habitats are priced rather high. Once you get your first three habitats in place it’ll be quiet some time before you can afford the higher level items. 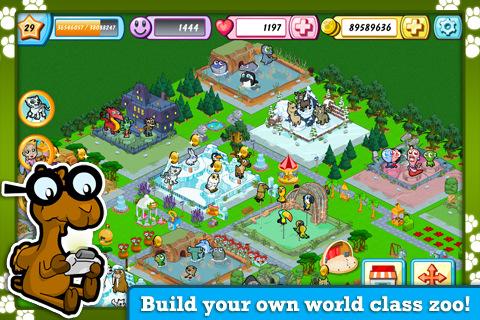 The one place the game does shine, though, is visually. It’s just so darn cute. All of the animals, even the fictional ones like the bug-eyed aliens and lumbering trolls, are adorable. There are camels with glasses and grinning blue whales. Really, there isn’t an ugly animal in the bunch. The only issue here is that the scale can be off at times, as an ice cream cone that’s left on the ground as garbage will be the same size as a person walking around the zoo. It just feels off.

But cute animals don’t make for a fun game, and DinerTown Zoo is just far too basic to be all that enjoyable. There’s so little to do and the progress is so slow that you’ll likely end up abandoning your animals before too long, no matter how adorable they may be.