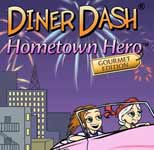 After her cruise ship adventure in Diner Dash: Flo on the Go, entrepreneur extraordinaire Flo comes back to find her hometown looking like a run-down dump. And so, she vows to rejuvenate the town one hotdog or hamburger at a time. There you have the premise for Diner Dash: Hometown Hero, the latest sequel to PlayFirst’s smash hit Diner Dash franchise.

Like any good sequel, Diner Dash: Hometown Hero retains the core format that made it so popular in the first place. In case you need a refresher, gameplay takes place in various restaurants where Flo is responsible for seating customers, taking their orders, serving food, collecting tips and clearing the table for the next round until closing time, where if she’s made enough money she moves on to the next stage.

Of course, it doesn’t stay that simple for long. Soon Flo will also find herself mopping up spills, snapping pictures for tourists, bringing drinks, treats and desserts, pushing tables together for larger groups, setting down flower vases and chatting with customers at the front podium all in an effort to keep their disposition high enough that they won’t storm off in a huff.

And just when she thinks she’s got everything under control, the power will go out (forcing her to use a flashlight), or she’ll hire an assistant – which is not actually as relaxing as it sounds because in Diner Dash: Hometown Hero the assistant doesn’t just help Flo but also serves customers on her own, which adds an element of friendly competition.

Different types of customer each have little quirks to deal with. Teenage boys and girls, for example, love to chat on their cell phones – much to the annoyance of anyone sitting within earshot. Some mothers carry babies on their laps that will cry unhappily until Flo brings them a high chair to sit in. The food critic is picky and impatient, while the hungry men order two rounds of food in one sitting.

As Flo tackles one venue’s restaurant at a time – starting with the zoo and moving on to the ballpark, museum, amusement park and beyond – you’ll actually see the setting start to improve dynamically in response to the positive effect Flo has on it. You’ll get to upgrade the counters, floor, tables, decorations and equipment, and in response more people will start to populate the area. The ballpark’s empty stands will fill with spectators, animals will be added to the zoo, and parents will start bringing their children to the museum again.

That’s just one of the notable changes to Diner Dash: Hometown Hero. Another is customization. You could already change how you wanted Flo to look by selecting different clothing and accessories, but Diner Dash: Hometown Hero takes it to the next level. Not only can you create a custom waitress (or waiter), but you can also design your own restaurant, play through it, and then upload it to the brand new Diner Dash website at DinerDash.com so that other people can play it too.

Another cool new feature in Diner Dash: Hometown Hero is an online multiplayer mode where you and a friend can compete head-to-head to see whose waiter can earn the most cash in a single restaurant. If you’re not keen on competition, there’s also a co-operative mode where you work together to serve customers.

Diner Dash: Hometown Hero is also the first time PlayFirst has experimented with micro-transactions in a Diner Dash game. If you’re willing to pay a small fee (we’re talking real-world money here, not the money Flo earns from her customers) you can purchase additional clothes and backgrounds and even entire new restaurants to play in Story mode, Endless and Multiplayer mode. The first to be offered is Waterpark Madness for $4.99.

Still, Diner Dash: Hometown Hero by no means feels like half a game if you choose to ignore the meta-transactions. There’s enough to do in Story and Endless mode, not to mention designing your own diners and challenging people online, that you don’t feel like anything’s missing if you don’t pony up for the extra stuff. They really are just that: extras.

Diner Dash: Hometown Hero is a good mix of the familiar along with several significant new ideas. Gameplay is still as challenging as ever and gets more than a little frantic at times (the bawling babies certainly don’t help), but most importantly, the game still feels fresh – which after this many sequels isn’t an easy feat.