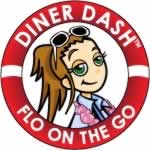 In the smash hit Diner Dash, this young restaurateur built up her small eatery into a thriving business, while in Diner Dash 2: Restaurant Rescue, she helps out friends ward off a new “Mega Multiplex” food plaza.

Finally ready to take a vacation with her friend Darla, the two climb aboard a cruise, only to find the food staff has quit. So, Flo and Darla are offered the job to feed passengers in return for reimbursing their trip and a little extra cash on top.

Naturally, they accept the offer. And so here we are with Diner Dash: Flo on the Go, the next chapter in the wildly successful PlayFirst franchise.

Here’s what the savvy game makers have “dished” up for casual game fans.

In case you’ve never clicked through a previous Diner Dash, these mouse-driven games challenge players to efficiently run a restaurant by seating customers, giving out menus, taking orders, serving food in a timely manner and then busing the tables to make room for new customers.

Performing these tasks for multiple customers at once can be daunting, but it doesn’t take long to fall into a comfortable rhythm, and it’ll be closing time before you know it. In order to move onto the next level, however, you must make a certain amount of money from your guests.

The game gets more difficult as more tables are added, different types of customers are introduced (each with their own specific habits and needs) and players must also deal with serving cocktails, noisy customers and entertaining guests in long lines so they don’t leave.

Bonus points are awarded for placing customers in same-colored seats (e.g. blue with blue) and for chaining two tasks together, such as taking two menus to the kitchen at once instead of individually.

Gamers can also upgrade Flo’s surroundings by improving the look or functionality of the restaurant, including better chairs, foliage or upgrading the kitchen (where Darla prepares the good eats!).

Available for both Windows and Mac users, Diner Dash: Flo on the Go doesn’t stray far from what made its predecessors so popular – in fact, it’s virtually the same game – but PlayFirst added a few new twists to keep the game-play fresh and fun.

For one, gamers can now dress up Flo in a number of customizable ways; every few levels or so you can gain access to Flo’s Closet and unlock new articles of clothing and other accessories, such as open-toe sandals, Capri pants, a visor, floral shirts and aprons, and so forth – and then choose what Flo should wear before going back to work. It doesn’t change the game any, but it’s enjoyable to change up her outfits.

Being on a boat, Flo will also find herself in unique situations. For example, tourists may want her to take their photo before they order. Or a rough current means some water may spill off the table and onto the floor, which you will need to mop up. If the power goes out, you need a flashlight to see (and seat) the customers. Families with babies need a high-chair or two brought to them, and so on. You get the idea. By the way, after Level 9, the game gets a lot tougher to reach your goal.

Along with tourists, who tip well but don’t like noisy neighbors, lovebirds take their time to order and eat. As you’d expect, you need to tailor your strategy based on who’s ordering (e.g. you may have time to mop up before the lovebirds will beckon you, while cell phone users are less patient!).

Upgrades are also tied to the ship’s deck, such as better-looking lounge chairs, lap pools and fancy umbrellas.

Without giving much away, Flo may begin her, so-called vacation on a cruise ship, but her adventures will take her in many other interesting places! We here at Gamezebo will let you discover this for yourself…

Diner Dash: Flo on the Go does exactly what a good sequel should: give gamers more of what they’ve grown to love about the series yet add new angles to keep the game-play interesting. Some, however, who may have expected more, or who don’t care about dressing Flo up in new outfits, may be disappointed there isn’t anything too new in this sequel. Overall, however, it’s truly a game that’s easy to play but hard to put down.