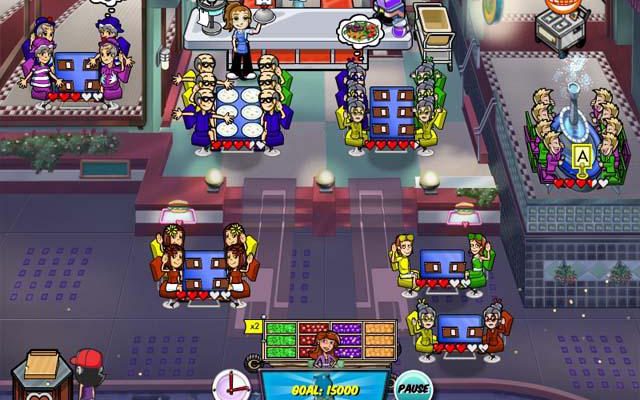 Prior Diner Dash sequels were starting to walk down the path of feature bloat, offering distractions instead of real enhancements to the original game’s customer service balancing act. Diner Dash 5: BOOM! effectively reboots the series, making it more player-friendly without sacrificing any of its basic appeal. Balancing a game out in this fashion is no small feat, making Diner Dash 5 feel as deep yet approachable as PopCap’s Peggle.

The plot of Diner Dash 5 has Flo’s diner leveled by a particularly brutal breakfast rush, but a contractor who’s addicted to Flo’s hash browns offers to help her rebuild it. So your buddy Hal rebuilds the diner as you go through the game, helping him out by serving meals in a variety of open-air settings. You can’t customize Flo’s outfits as you could in Diner Dash 3: Flo on the Go and Diner Dash 4: Hometown Hero, but instead you get to build an entire customized diner for the game’s final chapter. 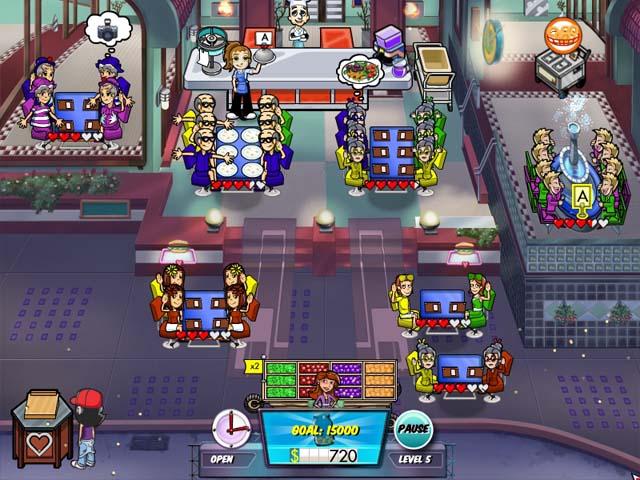 Core gameplay in Diner Dash 5 is pretty similar to prior games in the series. You need to match groups of customers them with the right table, take their orders, deliver their food, and give them the check without taking too long. Delays irritate customers, making them leave, but doing the same activity several times in a row offers valuable combo bonuses. Different types of customer have different sorts of personalities, with a few new faces and a lot of gimmick customers returning from previous games. You can also move townies into groups now, which gives you a little control over how customer groups are composed.

The game is split up into five chapters, each with a set of 10 levels set in a different location. Where the Goal and Expert scores were very close together in most prior Diner Dash games, in Diner Dash 5 the Goal scores required to progress tend to be very low – only about 25% of the Expert score once you’ve gotten past the first hour or so. You may make it through the game’s basic story mode without playing any level more than once. This doesn’t mean this game is a wash for players who mastered earlier Diner Dash games, though.

You can spend the money you earn serving customers on a variety of power-ups for Flo and her open-air diners, including valuable helpers, so you have a reason to care about making as much money as you can in every level. Diner Dash 5 also introduces Bonus levels at the end of each chapter. You don’t have to play these, which is good they invoke the soul-crushing difficulty of the endgame or Endless Shift mode in prior Diner Dash games – only they’re harder!

Diner Dash 5 also introduces some social features that are sure to make the game more competitive among groups of friends, though it drops the multiplayer mode introduced in Diner Dash 4. Diner Dash 5 supports Facebook Connect and a Medal system that records in-game achievements. If you let it, Diner Dash 5 will announce your exploits to your Friends. You’ll also be able to give your Friends Diner Dash 5 virtual gifts that will actually power-up Flo if they opt to start playing. 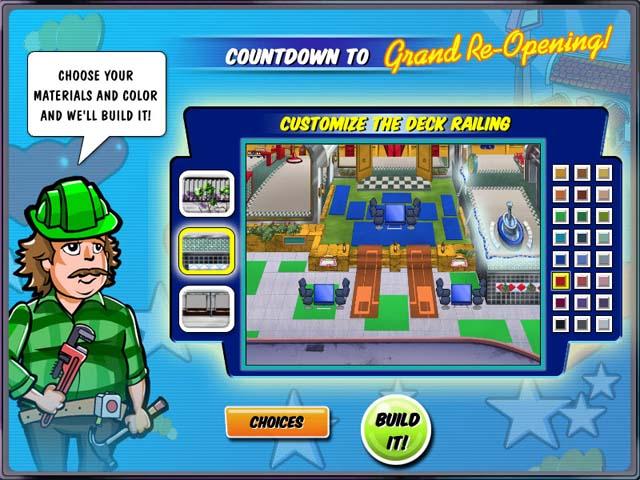 Diner Dash 5‘s new features, remarkably, introduce no real new flaws into the game. The few problems it has are problems that have lingered since the first entry in the series. Controls can still be mushy, with a finger slip often having disastrous consequences. The snack mechanic is still an annoyance, breaking combo chains and wasting your time (since snacks will frequently disappear while you’re trying to deliver them). Overall, the graphics and production values for this entry in the series are a big improvement even over the slick-looking Diner Dash: Hometown Hero, complete with voice acting to accompany the fully animated cutscenes.

Completing Diner Dash 5‘s story mode is satisfying. Going back to work on improving your level scores is really satisfying. Diner Dash 5 is the first sequel to the original Diner Dash that feels like a substantial improvement on the original rather than an expansion pack. If you haven’t tried Diner Dash before or were frustrated by earlier games in the series, give this one a try.