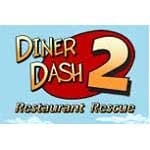 Lately, there’s not a waitress alive who wouldn’t love to have me as a customer: I’m the guy who’s polite, never asks for a substitution, and tips 35 percent.

What’s turned me into the best table of the night, every night? The culprit is more than a few hours of PlayFirst’s Diner Dash 2, which has taught me just how hard food service industry folks are working for their money.

This is the second iteration of the best selling casual game, but the formula remains the same. You play Flo, the former exec that’s left the boardroom for the dining room. As customers enter your restaurant you’ll need to take orders, serve food, fetch high chairs and bus tables, all fast enough to keep the customers happy.

The core gameplay is the same as in the first title — but that’s not a complaint. This is a solid formula that has been imitated but not duplicated, and shouldn’t have been tampered with.

At its heart, it’s a challenge of multitasking. Just when you think you’ve mastered serving and cleaning, a new facet is added, like cleaning up spills from families. These changes keep the gameplay fresh and the difficulty constantly increasing — but more on that later.

When you do keep the people happy, and make enough tips to complete a level, you’ll get to choose one of several improvements to your restaurant.

But in Diner Dash 2, you’re not improving your own business, but those of your friends. By filling their coffers, you’ll be keeping them out of the clutches of fat cat land developer Mr. Big. It’s not exactly a deep story, but the plot that is there did help to keep my interest. The varied settings didn’t hurt either. You’ll serve food in every locale from a Mexican cantina to an Italian pizzeria, each with different items to give to your customers, breaking up the stages nicely.

Like all of the game’s graphics, these stages are colorful and are chock full of details such as cracked walls. Also, the games’ soundtrack is much improved from the original. Also, Diner Dash 2’s high-quality sound effects are the best I’ve heard in a casual game.

An all-new crowd of customers also differentiates the sequel from the original. As if it wasn’t bad enough keeping diners happy, now you’ll have to keep them as far as you can from power lunchers on their cell phones, and give special attention to the food critics that visit your friends’ restaurants.

Keeping all these proverbial plates spinning sounds difficult, but it’s not — at least not at first. Control is easy, and confounding items are added gradually enough so that it doesn’t seem overwhelming.

Ironically, the game’s only real problem is from the occasionally excessive number of customers. There are just too many mouths to feed too soon, making some levels an exercise in frustration.. There were other minor issues with the title, including imprecise controls, but these were insignificant in the big scheme of things.

The game’s difficult isn’t a deal breaker. On the contrary, you can see the challenge as setting Diner Dash 2 apart from other casual games. Rather than being a mind-numbing click-fest, this is a pulse-pounding quick jolt of excitement.

And remember, if things get too tough, you can find your Zen serving groove in the game’s “Endless Shift” mode. Oh, and don’t forget to tip your wait staff … big.