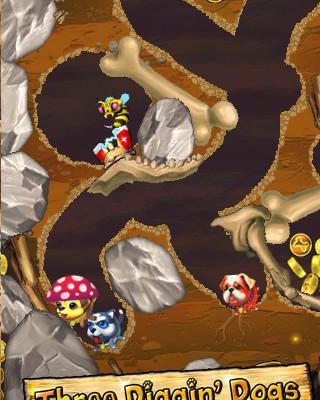 The Where’s My Water? formula has gone to the dogs

There is not one specific thing you could point to in Diggin’ Dogs that was out and out bad. The mechanics work flawlessly, the game is easy to understand, and there is plenty of content for the admission price. If you could point to any one thing though, it comes from the calculation behind the craft of the game—Diggin’ Dogs just borrows too much from an already successful formula.

In Diggin’ Dogs, you control the fate of three cute cuddly dogs. As the title suggests, you will be digging down into the Earth, which you as the player control by moving your finger along the screen to eliminate dirt and clear a path for your pups. If you have ever played the fantastic Where’s My Water? you will be instantly at home with how Diggin’ Dogs controls. instead of manipulating pathways for water to drop up or down the pathways you want, you’ll create paths for your dogs to safely traverse. The difference comes in your ability to swipe your dogs and have them jump, or using the iPhone’s accelerometer to get them to slide into the areas where you want them to go.

Along the way you’ll collect coins, bones and power-ups, while you want to avoid enemies and environmental hazards. Like many games of its kind, the challenge is not necessarily in simply passing missions but in passing them well, as many coins and bones as possible to get bronze, silver or gold medals.

There are five different locales for your dog’s to dig, each with 12 different missions inside each for you to master. This is more than enough content to justify the budget price of the game. Aside from the first few missions that serve as a tutorial, most missions will give you a good test in forward thinking. If you rush into drawing pathways for your dogs before you properly survey ahead, it is quite easy to lead your pups to the slaughter.

Some of the missions will split your dogs up, which were my personal favorite. These levels place planning in plain view by placing certain power-ups (such as one that mounts a mushroom-killing helmet on one canine’s head) in such a way that you need to forge ahead with one dog before the other two can continue. 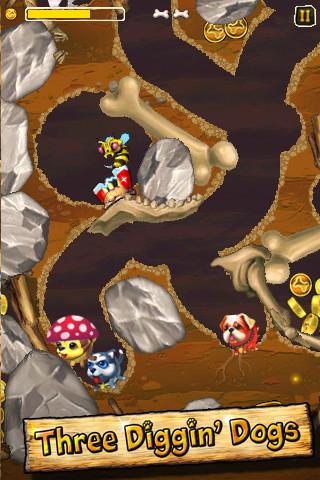 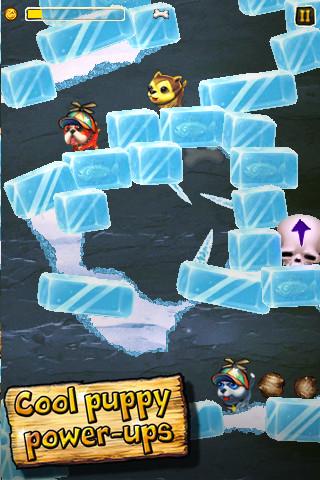 The only real issue I had with the game is the knowledge that, while it was well made, it definitely borrowed heavily from Where’s My Water?. Then again, there is also a compelling argument that can be made that creative mediums come with a certain level of inherent borrowing and refinement of things that have come before them.

Despite not adding much new, Diggin’ Dogs is a very fun and well made title. Attempting to get all the bones in each of the missions would be a lengthy, fun process. If you’re looking for another game that will mollify your completionist urges, look no further.