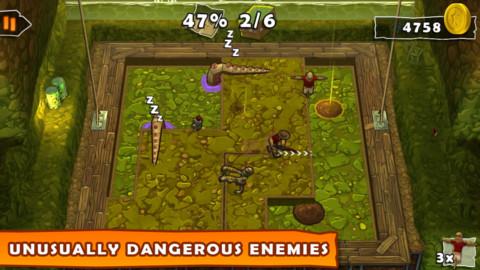 Go spelunking to a simpler time with Dig!

When it comes to the video game realm, digging may be an oft-recreated theme, but that doesn’t mean there’s no room left for some awesome newcomers to enter the fold. Games like Digging and Glean are enough to pique your interest when it comes to the genre, but Dig! is a retro-flavored take on mashing through the ground and searching for treasure. Reminiscent of Qix and all the 80s-tinged adventures out there, Dig! is an arcade hit that’s sure to please.

Dig! places you in the shoes of an archaeologist who spends all his time digging – that’s his livelihood. But this is no ordinary job, you see. Rather than minerals and dirt, he finds a few much more interesting tidbits than you’d normally see grounded in reality. Like apples, or even toilet seats. Lo and behold, you’ll even happen upon delicious cake further beneath several layers of the ground. There’s a veritable treasure trove of valuable pieces hidden below: all to be placed on display in the in-game museum.

All you need to recover it all (and keep yourself safe from oncoming enemies) is strength, stamina, and accuracy. There’s a great tutorial at the beginning of the game that teaches you how to play quickly and efficiently. Swiping and tapping helps control your digger, such as tapping on the spot you’d like to go to and swiping in the direction you want to dig in. Once you’ve dug past an area, the dirt will cave in and you can find treasures beckoning to you, like glowing piles of awesome.

But it’s not all fun and games (technically it is, but you get the picture). You need to be wary of wandering gnomes, moles, and even Nigel the Mummy, who will very quickly end your digging spree. You’ll need to devise new digging paths fast if you want to avoid the nuisances and continue each scenario, which can be a rather grueling task if you don’t immediately become acclimated to the gameplay. 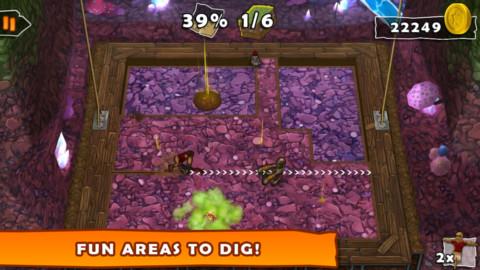 You’re not alone, though – there are special hats you can don in order to hasten your digging and running, as well as augment your character with special abilities. Half the fun is in collecting each one to see what it’ll do, aside from rolling in more coins for purchases. Once you collect 75% of the available in-game objects, you get a checkpoint, though there are only two within each area. If you get hit, you’ll be sent to the last checkpoint, meaning all of your progress is lost. This does contribute to some frustrating areas, but the game is good at making you want to keep playing, regardless.

Dig! is an intriguing little arcade game that takes a seemingly “boring” idea and spins it into a decent little platformer/digging adventure that requires intelligent tactics and planning for success. If you’re a Dig Dug or Qix fan, you’ll find plenty to like here.