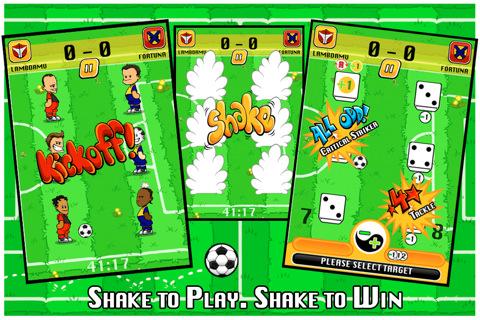 Dice Soccer rolls up a splendid game of six-sided footie

Ok, full disclosure time. When I first heard of Dice Soccer and saw what it was about, I was pretty quick coming to the foregone conclusion that it was going to be terrible. Rolling dice to play a game of soccer? It just doesn’t sound like it would work. In the first few matches I thought I saw my pre-conceived opinion being borne out too. But then I started to see what was going on under the hood, and strategy starting exposing itself to me. Now? Consider that initial opinion totally reversed.

When the match starts, both you and your opponent will have 3 forwards represented on the field. Tapping (or shaking) the screen will turn those players into dice that will roll themselves. Whichever team gets the higher total wins the ball, or if they already have the ball they move it upfield. The process will repeat itself as the offense moves forward (on winning the dice rolls) to face the defense and then the goalie to try and score. Losing rolls moves the process backwards.

So yes, the title Dice Soccer is pretty indicative of what’s going on in the game. Your team is made up of players that turn into dice and roll themselves on the field, with the higher result winning. Not too compelling. But then you start seeing the power ups different players have, and that players have different numbers on their six sided dies. You might have a player that lets you double a die roll whenever someone on your team rolls a three, or can re-roll a die when someone rolls a one, or even subtract numbers from the other team. So the raw rolls often gets changed and manipulated before a final is tallied, and therein lays the strategy.

On my team I have a player that lets me double a score whenever one of his teammates rolls a three, so I partner him up with another player that has 3’s on three sides of his six sided die. See how those mesh together nicely? My defence players rely more on abilities that will muck up the other teams rolls as a last resort. Of course you can always substitute players in-game if you find your makeup lacking. New players become available for purchase with in-game money as you play, or you can open them up for real world cash right away. 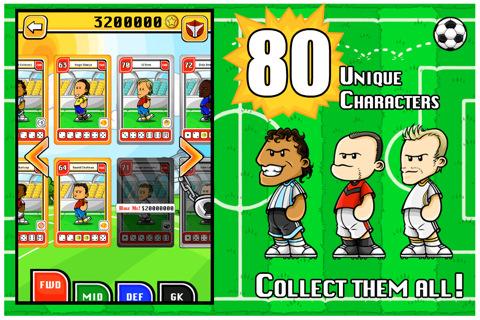 It’s the ebb and flow of creating these decent combos and dealing with what your opponent throws at you that make up the strategy of the game, and I was surprised at how much there was once I started really playing it. But even better than that, on top of being a light strategy game it’s also just a lot of fun. I found it similar in spirit to something like Magic: The Gathering, in that just like building a proper deck for a balanced attack you need to move players around and pair up the right ones to really get the game going for you.

With a bunch of different unlockables (players and vanity items like jerseys) and different leagues of varying difficulties, not to mention tournaments, Dice Soccer really does offer a decent amount of content. Once you get past the goofy idea and put some time in, the game opens up and really presents a nice experience.