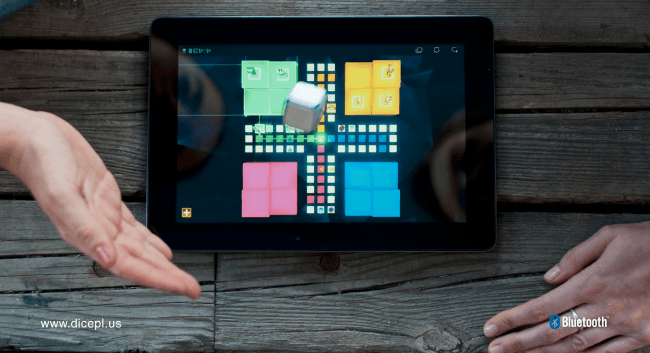 It’s Dice, but not as we know it

The first game I ever played on an iPad was a free version of Liar’s Dice where you shook the device to roll the bones. At first, it was novel. After three goes, it was annoying beyond belief. This demonstrates two things: firstly there’s a good reason why most board games stick to digital dice; but second, that there’s still an aching desire to physically interact with something when you play a board game. Enter Dice+.

It’s a little rubbery cube which communicates with a range of mobile devices, including those running iOS and Android via Bluetooth, and takes the place of a physical dice. You roll it, and the number flashes on the uppermost face and is communicated to the game. It’s slightly bigger than an average dice, but still rolls comfortably from the hand with a pleasingly tactile and weighty feel.

It seems to work a distance from the mobile, so your numbers come up even when Dice+ rolls under the table. However, some anti-cheating technology built into the device means a small proportion of rolls don’t register. Annoying, but a small price to pay to stop fraudsters from finding the six face and repeatedly dropping it directly on the table. It’s charged via a port revealed when you slide up the one face, and a full charge lasts ages: about 20 rolling hours.

So as a device, it works beautifully. But I was initially struck that Dice+ felt more like a neat gimmick than a must-have addition for board game fans. Having played with it, I can confirm that the simple action of rolling does add a certain something to digital board games: a light tickling of the nostalgia buttons and a sense of sharing an experience as you pass it back and forth with your opponent. But that isn’t enough to justify the price.

Thankfully, Dice+ offers a little more. The numbers can flash up in different colors, giving two random selections from one roll. It might not sound like much, but a couple of the five games that come bundled with the device show the intriguing possibilities that it offers.

The first is a Twister-style game with fingers. You roll Dice+ for a color and a number, and then try to get your fingers onto the corresponding number of hexes of that color on the board, and keep them there while your opponent rolls. The other is a timer-based mathematical strategy game where your number and color combination corresponds to sums on a row that you must make add up to 21, while occasionally selecting your opponent’s row to stop them from doing the same.

What these games demonstrate is that this device offers possibilities for play you can’t get with a regular dice. They combine the possibilities offered by a single throw for a color and a number with a physical skill and a timer, respectively. It’s hard keeping your fingers on the board while you toss the dice with the other hand. It’s even harder to watch the dice come up, then switch attention to the board and make a good move within a three-second limit.

Sadly the other three games in the starter package are pretty forgettable. One is Backgammon, a mystifying choice since it actually highlights a shortcoming of the device in that you have to roll it twice in succession if you want two numbers. The others are games for small children which are fun enough but as a parent, I’d rather mine played a physical board game with an ordinary dice and learned some basic maths through counting and moving for themselves. 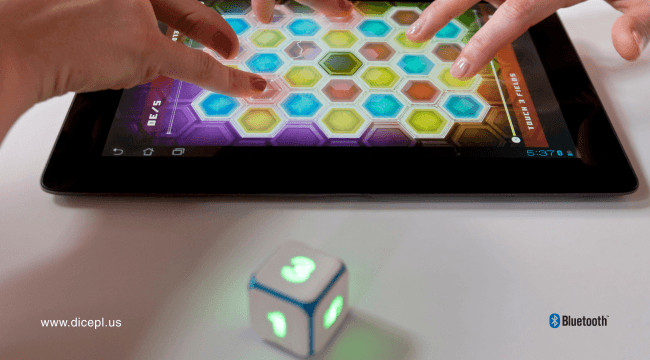 You can purchase more games as in-app purchases, although the selection is very limited at the moment: more are promised for the near future. However, because it’s not the app store there’s no ratings or user reviews so it’s hard to get a sense of their quality.

But this is early days. Dice+ is a functional and robust device that adds a small dimension of pleasure to mobile board games. However, there’s lots of untapped potential here. Remember I started with Liar’s Dice? How much more fun could that be on a mobile if you had an actual dice to hide, or a variant that took advantage of the digital format to do creative things with that hoary old game. With the imaginations of designers and developers, this could go to some fascinating and wonderful places. For now, I’d wait and see where they take it.

Enigmatis: The Mists of Ravenwood Review