By Kellie Cardwell-Winters | 14 years ago 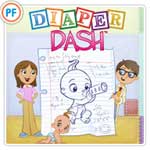 Diaper changes, feedings, crying babies… does it ever end? Not if you’re playing Diaper Dash. The newest time management game from PlayFirst and developer Zemnott will charm with all the baby and toddler-filled cuteness you could ever imagine, while coming up a bit light in the challenge department.

In Diaper Dash you’ll meet Wilson, a tender-hearted scientist and inventor who works for Rubber Ducky, Inc., a subsidiary of BigCorp., which is owned by the rotten Mr. Big. Wilson breaks the rules by picking up a crying test subject and is immediately fired. Unemployed and depressed, Wilson visits Flo, the popular waitress of Dinertown who always has great advice.

With Flo’s help, Wilson realizes that the inventions he was forced to work on might not have been such great ideas after all, and he decides to invent machines to make child care safe and fun. So, in the basement of his sister’s house, Wilson’s Daycare is officially open for business. The residents of Dinertown are thrilled to have such a compassionate professional to watch their children… (Well, most of them anyway.)

Diaper Dash offers two modes of gameplay. Career takes you through 50 levels from basement to mansion, with each level requiring a specific amount of money earned to progress or master. Endless Day is played in easy, medium or hard modes allowing you to play non-stop until five babies have left unhappy. In Career Mode, there are more than 20 upgrades available for strategic purchases such as Stain free carpet or the Auto rocking sleeper.

Each building represents ten levels of game play and will have certain elements in common such as the playpen waiting area, high chairs, cribs, changing station and play areas. There are over ten different babies for you to take care of each having different temperaments and needs, such as the "Hungry Man’s Baby," William, who has an appetite like his father, and Rita who needs frequent diaper changes. It is your job to move each baby from station to station meeting their needs so they are happy when the parents arrive to pick them up.

Above each child’s head is a pink or blue bubble indicating the gender and immediate need. At the day’s start, the child will either need a diaper change, nap, bottle, or playtime and will have several different needs before the day is finished.  As soon as one need is met, another one immediately appears in the thought bubble. Each station becomes color coded based on the gender of the child allowing you to obtain extra points with the Gender bonus. If two babies of the same gender swap positions, you will earn a Swap bonus, and if you meet the needs quickly, you will earn a speed bonus.

As you progress, Wilson completes five inventions, consisting of the Cleanatron, (to help with all the baby mess) Toy dispenser, (Dispenses a teddy bear to an unhappy child) Distraction phone, (Summon a juggling clown or ballerina to make everyone happy) Storybook reader, (Reads stories to babies in the waiting area) and Lightning sneakers. (Gives Wilson super speed).

Once all the babies are taken care of and you have earned the minimum money required, the level is complete. If you fail to meet the financial requirements, the level can be replayed.

I have high expectations of PlayFirst’s Dash series, and while I loved the game overall and found it to be clever, fun and full of charm, it did disappoint in terms of challenge. After having completed nearly all of the games in the series, this was the first time that I was able to earn all expert scores easily in less than 12 hours.

Luckily, the game offers an Endless Day mode, which gives it the re-playability needed to make this game worth the price. As well, the characters are delightful and fans of earlier Dash games will love seeing the children of their favorite Dinertown residents.

If you liked this game, try Daycare Nightmare: Mini-Monsters, Carrie the Caregiver 2: Preschool, and Doggie Dash.