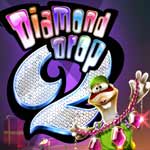 As journalists, we thought it was our job to dig up the dirt on casual games. But in Diamond Drop 2, sequel to the popular pattern-matching mind-boggler, that responsibility falls more to Gary, a mole miner known for his way with gems. Thankfully, there’s no sense splitting hairs here, though – amusing and fast-paced as the title proves, you won’t care either way.

Per the simple, but well-executed plotline, told through interstitial dialogue sequences between our hero and the animal inhabitants of bustling settlement Fieldgrove, you’re quite the jeweler. Customers from all over can’t help but picking up your wares. Joining the star as he goes about his day’s business, it’s the player’s job to ensure shoppers are kept happy and enough coins are collected before time runs out on a series of action-packed, standalone levels.

Play itself couldn’t be simpler. Basically, rows of precious stones slowly descend from the top of the screen. Standing below them is a beautifully animated Gary, his look and movements sporting an oddly Claymation-like feel. Clicking the left mouse button causes the single jewel, or stack of similarly-colored stones located directly above you, to fall into your waiting arms. Clicking the right mouse button instead causes them to fire directly upwards. The trick being, of course, that if you – through your direct actions or a resulting combo – cause three or more stones of like hue to come in contact horizontally or vertically, all disappear from the screen.

Making matches is quite the art form, especially since you can hold as many stones of the same color as you like. What’s more, it’s also profitable, as once grouped, stones are then weighed and set in pieces of jewelry which you’ll sell to smiling patrons for cold hard cash. Fill your safe with enough money before the ticking timer runs out, and you’ll move on to the next level. But beware; from falling rocks to cones that must be eliminated by making nearby matches or coal that has to be smashed with a well-aimed toss, obstacles are regularly inserted in your path.

All told, the flow of the game works quite well, and timeouts for tutorials and general hand-holding are kept to a minimum, as the basics are so easy to grasp. The inclusion of randomized power-ups (point multipliers, snails which change nearby gem types, cakes that add seconds to the clock) and bonuses (new types of jewelry, customer attitude-improving sweets, productivity-boosting scales/gloves) also helps.

But conversely, challenge levels are kept to a minimum – a positive or negative depending on your perspective – and you’ll seldom feel the rush of executing last-minute saves, as in genre-leading competitors. What’s more, chintzy speech samples (starring what sounds to be actual members of the German development team imitating women’s voices) and weird hand-drawn character portraits add a strange touch of oddity to the experience.

Nonetheless, the script – which sees you meet with restaurant owners, judges and opera singers – and general execution of the title are well above average, and we’ve few complaints about the actual setup. Certainly, additional game types (there’s only Story and Timed modes), a higher degree of difficulty and more mid-mission twists would’ve proved welcome additions. (We’re also not sold on why the game automatically hands out certain goodies to customers instead of making the player do it manually.)

Still, given the generally high quality of the presentation and how nicely the title handles, we’re willing to forgive a few minor complaints. Even, that is, occasional troubles with the game’s English translation, e.g. tips like “pay attention to your customer’s mood, it is influence to your result summ [sic].”

Keeping this in mind, Diamond Drop 2 certainly deserves a peek, at the very least, from eager keyboard jockeys. Whether it’s worth your hard-earned loot, however? That depends entirely on your preference for mind-numbing fun vs. all-consuming addictions. Should you lean more towards the former though, the good news is that you might just find this puppy an, ahem, you-know-what in the rough…