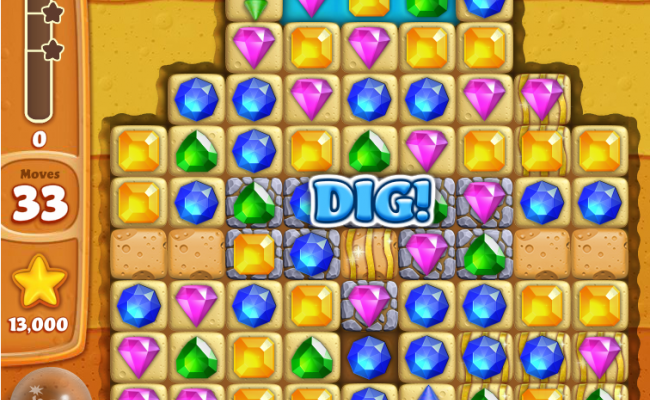 Shine on You Crazy Diamond

What riches lie just beneath our feet? Gems? Dinosaur bones? Gem-encrusted dinosaur bones? Diamond Digger Saga, the latest title from King, has one answer: Another puzzle game that will gulp down hours of your time like a hungry sandworm from the depths of Arrakis. 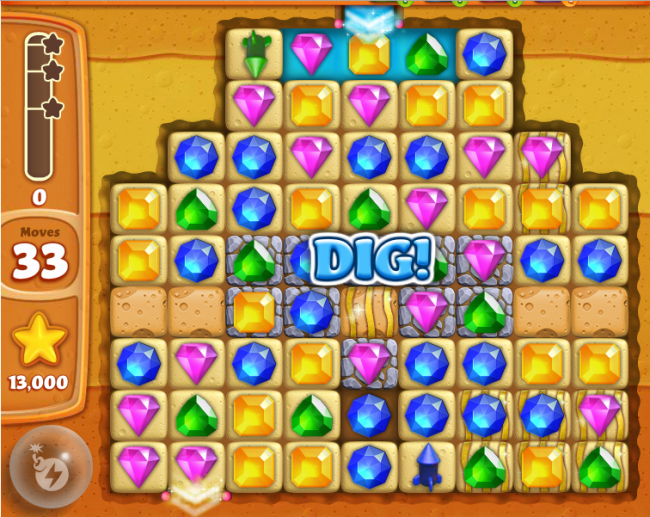 Many gems lie on a bed of sand, and when they’re matched, that sand disappears. Each level also contains a flow of water that’s held back by sand and rock. When you clear a path to the “plug” at the bottom of the screen, all the gems wash down to the next level and you gain two more moves.

As is the case in most King games, you live and die by the number of moves you have available to you. Each level presents a specific task (or tasks) that must be completed within a certain number of clicks. You might need to reach a minimum score, or awaken a set number of fireflies by washing water over them, or rescue toys by breaking them out of blue blocks.

If you’ve played a King game at least once (and if you currently have blood running through your veins instead of embalming fluid, that’s very likely a “yes”), then you’re already aware of the frustrations that come with getting hooked on one of the studios’ free-to-play games. Make no mistake: The same frustrations are present in Diamond Digger Saga. 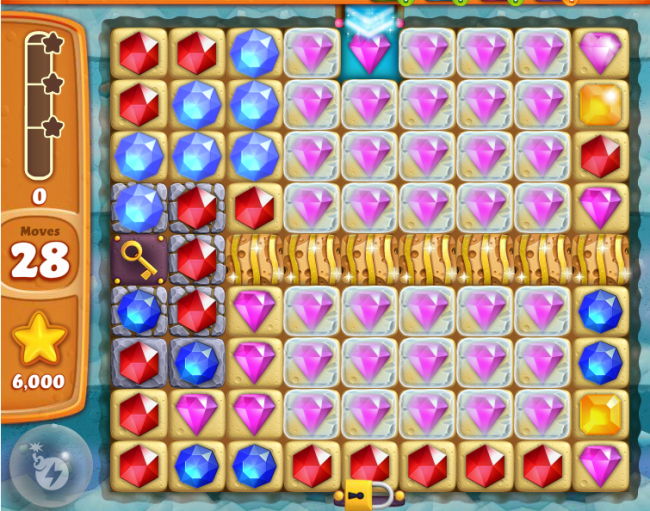 You breeze through the early levels, but eventually you’re expected to clear away layers of rock or ice, a procedure that takes several precious moves, not just one. In no time, your stock of lives dwindles (you lose one every time you fail a level) and you become much more reliant on power-ups – which can be bought with premium currency once you’ve run through your small stash of freebies.

The hell of it is, Diamond Digger Saga is as addictive as previous King releases. Listening to gems clatter around the game board is soothing (it’s the little things that get you), and watching them all “flush” down to the next level is satisfying as well as fun. If you’re a fan of King games, get ready to play “just one more level” of Diamond Digger Saga. Then another level. Repeat until it’s three in the morning and your dog still hasn’t been fed.

The real question is, will you actually spend money on gold bars, the game’s premium currency, especially when the puzzles start stacking the odds against you? King is counting on it.

Diamond Digger Saga is another addictive puzzle game from King. If you’re the type of person that’s able to enjoy King fare without blowing your life savings on extra moves, it’s a good way to pass some time. Just don’t feel too proud of yourself when you glide through the game’s early levels: You will be humbled in time.