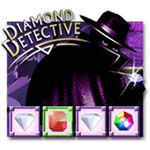 Everyone loves a good mystery.

For example: Diamond Detective, a film noir-style interactive outing that sees you playing a puzzle-solving sleuth hot on the trail of a nefarious jewel thief.

A compelling fusion of differing play styles and challenge types, it’ll have you pining for more – and, quite possibly, your own fedora and private investigator’s license – in no time flat.

The tale opens upon an amusingly animated, fog-choked street complete with a shadowy character whose darkness-shrouded face is featureless apart from a pair of shifty, blinking eyes. After setting software options and pressing start – depicted as a creaky, swinging sign – the action gets underway.

Unsuspecting city Gemopolis has, apparently, been the victim of a heinous crime: Someone’s broken into its vault and stolen a hoard of precious stones! As the town’s police chief (a tip-spouting cartoon character who pops up periodically to offer advice or encouragement) explains, it’s time to catch the crook and put them behind bars. Even if, that is, you’ll eventually learn that not one, but several burglars – OK, an entire ring of them – are responsible for the offense.

Arriving at each stage, you’ll find that a grid of individual squares filled with colored gems like pink hearts, green emeralds, red rubies and purple diamonds rests atop a moonlit urban environment. To thwart the aforementioned lawbreakers, you must block their escape by creating matches made when two or more similarly-colored gems are located adjacent to one another. Highlighting these matches and thereby removing involved jewels from the board is as easy as selecting a starting square and then dragging in any appropriate direction with your mouse. (Although you can also individually click each square and use the Submit button instead, with this method of control offering greater precision, yet proving slightly more laborious.)

The more matches you make and the greater the number of gems featured in each, the faster you’ll fill a meter that, when maxed out, signals victory and your successive progression one level further into the adventure. Fail to complete the task assigned before the shady figure creeping along the bottom of the screen reaches the other end of your monitor, and all is lost. Do so successfully, however, and you’ll also gain one of several handy clues, e.g. gloves, ratty shirts, carrots, toothbrushes and cologne.

Why all the evidence?

Every few stages, you’ll additionally be asked to look at a lineup of suspects starring oddballs like the malodorous Steven Stennch, penny-pinching Max A. Million or one-handed Harold Hooke. Pictures and brief descriptions of each are provided, and based on these facts, you’re supposed to match the clue the thief left behind with the suspect least likely to have dropped it. (For instance, given his situation, Mr. Hooke probably wouldn’t need two gloves, or another suspect who’s a coal miner a clean white shirt.)

Eliminate enough potential robbers through this logical, if somewhat oversimplified, process and you’ll eventually narrow down the list until you’ve fingered the actual crook. Afterwards, color in every square of another gem-occupied board by making a match using it, and you’ll catch your quarry and bring the twisted mastermind behind the whole caper one step closer to justice.

Thankfully, while time limits and hints are overly generous, meaning you’ll never feel hard-pressed enough to really break a sweat (even if there’s a penalty for randomly reshuffling boards on-command), the game still pleases. A horn-heavy soundtrack and dark background palette help set just the right atmosphere, with additional twists such as special power-ups and obstacles keepings things interesting between each scenario. Breeze through enough levels, and you’ll eventually encounter ice-covered blocks that must be shattered, time-stopping squares that halt burglars in their tracks, and bombs which seed the board with bonuses. If you’re really lucky, you’ll even be awarded diamonds or rainbow-colored stones for making big matches, which act as wild-card replacements for certain jewels or universal connectors.

Pile on collectible trophies (awarded for feats like making 10 diamonds or knocking out 15 or more stones in a single match) and ranks (e.g. detective or super-sleuth) earned via monster point-scoring, and what’s not to love? Though it might not take the brains of, say, a Sherlock Holmes to solve, Diamond Detective is nonetheless one case well worth cracking.