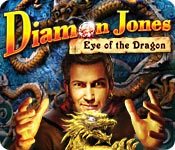 In this sequel to Diamon Jones and the Amulet of the World, treasure hunter Diamon Jones rather reluctantly embarks on a new adventure that takes him from Shanghai to Chicago with a few stops in between.

The story opens in a Shanghai bar, where rough-around-the-edges explorer Diamon Jones is celebrating the fact that he’s just been fired from his latest job. When he runs out of credit at the bar, he agrees to help the innkeeper Win-Dou recover an ancient seal to earn more – and thus the adventure begins.

Diamon Jones: Eye of the Dragon is a point-and-click adventure, meaning you can make Diamon interact with the environment, pick up objects and talk to characters by clicking on them with the mouse. Some items can be carried with you in an inventory and used later on. Goals and important information are recorded in a diary so you’ll always have a reference point if you’re unsure of what to do next. Later in the game, you’ll get to play as Diamon’s friend Mary Ocean as well.

There are a handful of action sequences and mini-games too, such as playing a round of mah jong, fitting pipe pieces together, and clearing a chess board using only the Knight playing piece. The mini-games are well done, but can’t be skipped, or restarted (instead, you can undo as many moves as you like), which might prove frustrating to some.

Visually speaking, Eye of the Dragon is above average. Environments are bright and detailed, and animation brings each character to life and infuses them with personality and humor. The cutscenes in the game are masterfully rendered as well.

However, while the gameplay is solid and the graphics are wonderful, Eye of the Dragon suffers from the same problem as its predecessor did: bad English. The opening cutscene is a mess, with voice-overs that don’t always synch up with the captioned text, which itself is married by missing apostrophes and other gaffes.

Things don’t improve from there. The game apparently takes place in the year 193. (Huh?) The dialogue is riddled with errors, from small mistakes like referring to a recipe as a "receipt" or referring to part of a balloon as an "envelope," to entire sentences that don’t make sense, such as when Diamon exclaims "Damn! I have made a clavus on my hand."

The game badly needed a native speaker to tidy up the text and make it more palatable and comprehensible to English-speaking audiences. It’s puzzling and frustrating that no one thought to do this before releasing the game in this market – puzzling because it really wouldn’t have taken much extra time or effort to do so, and frustrating because dialogue makes up such an important part of an adventure game such as this.

It’s a shame, too, because there’s a genuine humor that comes through in the character animations that doesn’t always carry over into the dialogue. Some dialogue that was perhaps meant to be funny, such as running gags in Shanghai about Chinese people eating dogs or all looking the same, are awkwardly expressed and instead come off as cringe-worthy.

Parents should also be warned that there’s some cursing in the game (including several uses of the "S-word"), and some adult situations: one of the characters talks about committing suicide, and settings include a bar and an opium den.

Diamon Jones: Eye of the Dragon is enjoyable in spite of the language issues, but at the same time it’s impossible to ignore them. There are plenty of other adventure games out there that you don’t have to squint and struggle through to try to understand what the heck the characters are saying, and those might be money better spent.

For similar games, try Diamon Jones and the Amulet of the World, Annabel, Broken Sword 2: The Smoking Mirror, and Samantha Swift and the Golden Touch.