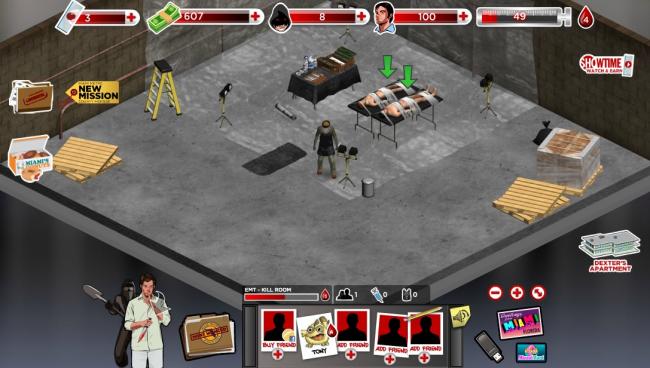 Another slice from the same stale pie

When I first ran Dexter: Slice of Life through its paces back in October, the game was a boring, borderline broken mess. Based on our criticisms, the developers have gone back in to tweak and polish the game up a bit. Has this cold-blooded killer come back with a vengeance, or is this Slice of Life merely another sliver of mediocrity?

As a recap, Dexter: Slice of Life is a Facebook adventure game based on the popular Dexter TV series. You play as the series’ main character, Dexter Morgan, bringing gruesome justice to the violent criminals of Miami.

In terms of gameplay, little has changed in the approach Slice of Life takes, though there definitely has been some tightening up of its component parts. Bugs and glitches have been mostly cleaned up, and there now seems to be more of a focus on simple point-and-click exploration over finicky stealth action.

Unfortunately, the game is still a collection of convoluted tasks that do little to pique the interest of newcomers or engage series fans. You’ll be led by the nose during each mission, collecting items and executing baddies, yet the game still manages to confuse and frustrate. Objects are poorly marked, and in addition to using energy, you’ll also be required to purchase items almost every time you attempt to execute any action in the game.

If the gameplay doesn’t capture your interest, there’s little doubt the plot will. Slice of Life is a creepy game, and not in a good way. Though the lifestyle of Dexter Morgan may be morbidly intriguing to watch on TV, it translates poorly to an adventure game. It creeps me out playing through a mission that tasks me with talking to children on a playground, collecting their toys, and then using those toys to exchange information with the school attendant.

The biggest changes fans can expect can be found in the game’s presentation. The colors are still drab, the environments completely ho-hum, but animations are more attractive and the game runs smoother overall. Additionally, you’ll hear a lot more chatter from the main character, which is probably going to be the game’s biggest selling point.

It’s admirable the developers have made an effort to rectify some of the problems inherent in Dexter: Slice of Life, but it feels more like sweeping dirt under a rug than an exercise in creativity. Considering the nature of the story content, it was a poor choice to push this game in this particular gameplay direction; remove the plot elements of the game altogether, and all you’re really left with is a lackluster click-fest that doesn’t come anywhere close to being worth your investment of time.

Slice of Life slices off its own limbs with terrible pacing and confusing, contrived gameplay

On the anniversary of its sixth year running, Dexter, Showtime’s macabre series about a blood pattern analyst who moonlights as a serial killer, makes its game debut on Facebook. Will this casual killing spree fill fans with murderous glee, or is this merely a social experiment gone wrong?

Upon first loading up the Dexter: Slice of Life game on your Facebook page, you’ll find yourself controlling the protagonist in a setting outside a hospital. The game offers no story premise, no instruction, and though many of the features of the interface will be familiar to Facebook gamers, the game’s introduction is undoubtedly confusing.

Unfortunately, Dexter doesn’t get better the further you delve into the game. You simply click on quest assignments located on the left side of the screen, but you’ll find there’s precious little you can accomplish with the resources the game offers.

As simplistic (and banal) as the gameplay is, you’ll be required to negotiate four stores of consumables: blood slides, money, stalk, and mask. Mask is pretty much your main form of energy, which you’ll use up by clicking on various objects located in the environment; stalk is energy used to hide within the environment.

In a nutshell, you’re tasked with stalking and killing human prey. However, you can’t simply walk up to targets and whack them out. You’ll first need to acquire specific items in order to get the job done right. With the amount of mask energy you’re given from the start, you’ll be able to click on roughly 10 objects before the game stops you in your tracks.

Stalking, on the other hand, is much more frustrating. It’s unclear just what the rules of engagement are. Sometimes you can walk right up to a target and kill them; other times you’ll take cover to no avail. It’s a boring, tedious process that yields no fun and little reward. 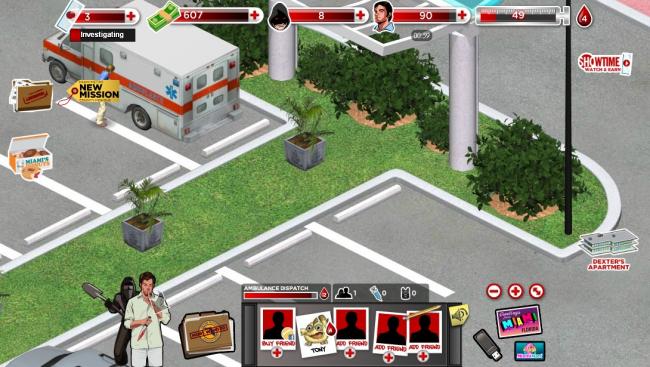 Dexter‘s presentation is as lifeless as the game’s virtual casualties. There’s no real story or context to draw players in, and the pacing is some of the worst I’ve ever seen in a Facebook adventure. There’s no real fan service, objectives are confusing yet contrived, and there’s simply no impetus to push forward.

Dexter also has the distinction of being one of the worst-looking games on the Facebook platform. Textures are bland, animations are stunted, and the art assets take forever to load. The music is perhaps the only high point in the game, with unsettling loops that fit the game’s premise well. Voice blurbs are hit-and-miss, however.

Fan or not, don’t waste your time with this hastily scraped together TV-show tie-in. It offers nothing of value for folks who’ve invested their time into the series, and as a game, it’s mostly broken.