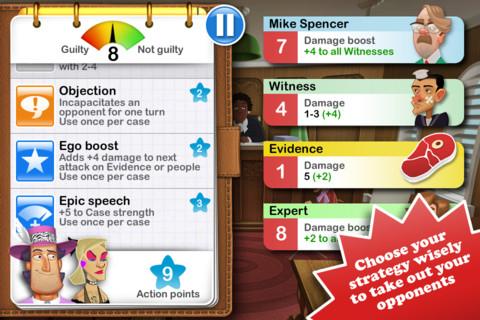 Because unscrupulous criminals deserve another chance

Most of us have a very love/hate relationship with lawyers. They’re a necessary cog in our legal system, but it often seems as though they care more about winning cases than protecting the innocent. And if the original Phoenix Wright was the game that inspired many of us to regard those barristers a little more positively, Devil’s Attorney will most certainly be the one that has us despising them again. Considering how much fun it is though, it’s pretty hard to object.

You play as Max McMann, a young defense attorney looking to make a name for himself. While such a process would take years in the real world, McMann’s lack of morals and willingness to game the system expedites things dramatically. Case after case you interrogate the prosecution, tamper with evidence, mesmerize witnesses, and patronize anyone who stands in your way. All of these actions have a calculable effect, as each character and piece of evidence has a set of hit points (HP) associated with it. If you manage to knock the HP down to zero, then that person/item is gone from the case. By that same token, the prosecution can berate you until your client is deemed guilty, resulting in a loss. Were that not enough, you have a finite amount of “Action Points” to attack the prosecution during each turn.

Winning requires a good deal of strategizing – particularly in some of the later cases – but the details surrounding each case has very little effect on the gameplay. You simply read a goofy synopsis beforehand, then hop in and try to defeat whatever the prosecution has waiting for you. One factor that’s hugely important though, is which attorney you’re up against. The game cycles through a few of them, and they all possess different courtroom powers. One, for example, heightens the powers of any witnesses involved in the case.

The disconnect between story and mechanics has some pretty great benefits to it. It allowed for the creators to come up with the most absurd court cases possible (they definitely took advantage of this), but keep the gameplay consistent in a way that leaves players feeling as though they’ve improved with each victory. Whether you’re defending someone who stole and sold books from the library or a man who smuggled lizards in his underwear, you’ll be employing many of the same tactics to win.

Which isn’t to say you won’t learn plenty of new tricks along the way. Winning a court case earns you money, which can be spent on apartment furniture that upgrades your Materialism, Decadence, and Vanity attributes. As you feed into these three criteria, you gain new abilities — such as being able to deliver an “Epic Speech” that improves your HP. While a structure such as this leaves plenty of room for IAPs, Devil’s Attorney is void of them, barring players from getting ahead without winning cases.

But I can’t think of any reason you’d want to skip ahead or bypass any aspect of the game. The cases never feel like a grind, and the voice-acted dialogue between McMann and his opponent at the start of each one is always a blast to listen to. Making a game that’s actually funny is no easy feat, but Devil’s Attorney pulls it off with gusto. If you don’t believe me, hop out of this review for a second and watch the trailer. 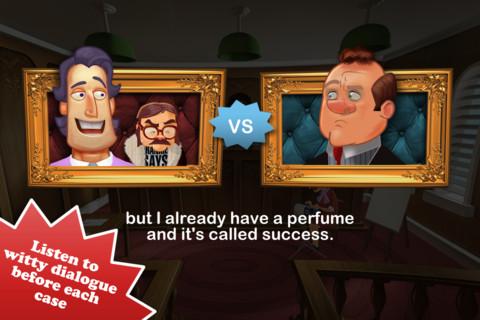 The game also has an extremely polished look to it, from its detailed character designs to McMann’s ever-improving apartment. There’s a very deliberate 80’s vibe to it all, and the music does a fantastic job of hammering that design choice home. If you don’t walk away from Devil’s Attorney feeling as though you’ve just watched some bizarro 80’s court show, then there’s really no hope for you.

As we reach the conclusion of this review, you’re probably wondering what the cons are. The catch, if you will. I’m sorry, dear cynical reader, but I’m afraid that there aren’t any. Every element of Devil’s Attorney has been tooled to near perfection, culminating in what is easily one of the best iOS games you’ll play this year.  One could say that not playing it would be criminal. And should you be accused of such a felony, I can only hope a lawyer as corrupt as Max McMann is serving as prosecutor.