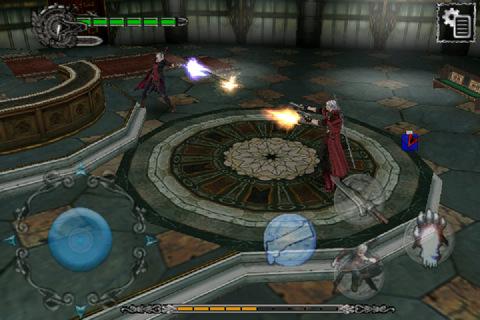 Devil May Cry 4: Refrain feels like everything is trying to succeed in spite of the hardware running it.

Of all the big-name developers for the App Store, Capcom seems to be leading the charge for bringing arcade and console experiences to the iPhone. From their Capcom Arcade collection to Ghosts ‘n Goblins to Dead Rising Mobile, it’s evident that they’re really trying to put out a solid product. The evolution continues with Devil May Cry 4: Refrain, but they still have a long way to go.

Again, if you didn’t follow, don’t worry about it. Devil May Cry 4: Refrain, like all the other titles in the series, is about stylized acrobatic combat with some light puzzle-solving, wrapped in a pretty package. That’s what you’ll get here, too.

The graphics in Devil May Cry 4: Refrain are decent, but a bit muddy. While the environments don’t feel quite as open as their console brethren, Devil May Cry 4: Refrain does try its best, but there is some obvious laziness. Outdoor environments have a static picture that never changes, even when the camera swings wildly. The soundtrack, taken directly from the game, fares much better. The tunes are high-quality, and sound great over headphones. Lots of little touches from the console versions are here, from the loud sound effects to the screen being riddles with bullet holes before shattering and revealing the end-of-level results screen.

The meat and potatoes of Devil May Cry has always been its combat, and it’s been reasonably translated in Devil May Cry 4: Refrain. On top of the best on-screen analog stick to date for movement, Nero has three basic actions: a jump, a weapon (gun or blade, depending on your proximity to your enemy) and a special attack called the Devil Bringer. This allows you to grapple enemies, throw them to the ground, or swing through your environment at special grapple points. As you rack up more and more points, you’re given a grade for the more concurrent damage you can cause, from D all the way up to S (the Japanese version of an A+). The higher your rank the more spirit orbs you collect, which can unlock various abilities and extra combos to dole out even more devastation. 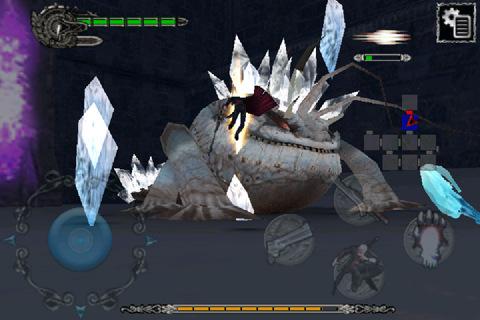 During the game’s ten levels you’ll encounter a variety of bosses, some great and some not. The bosses range from being reasonably tough to just plain cheap. The fourth level features a giant frog who, if you don’t dodge fast enough, will chew you up and spit you out while taking half your life meter for the privilege. It’s incredibly infuriating, as Devil May Cry 4: Refrain sometimes has occasional frame rate issues which can interrupt the flow of your combat. While this may seem like a trite comment, flow of combos is key to success in any Devil May Cry, and here it just feels jittery.

Devil May Cry 4: Refrain has a lot of false-start feeling to it. Though there are a lot of combos to be had here, and the controls are pretty responsive, there is nothing regarding defense here. All Nero can do is attack without any real options to evade or block. The whole game is a bit button-mashy, which may look good but feels a little hollow. And though there are ten levels, you’ll probably blow through them all within a couple of hours.