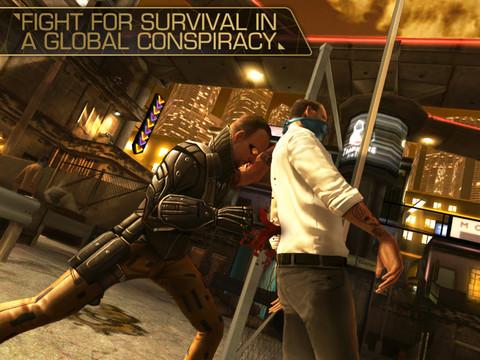 Despite a rough landing, Deus Ex: The Fall is an excellent experience.

Like others, I was flabbergasted when Square Enix announced its new Deus Ex game would be on iOS. In the minds of many, the announcement was further proof that Square was completely out of touch with what its community wants.  I initially agreed with that sentiment, but after playing Deus Ex: The Fall, I not only believe Square made the right move, but set the bar high for future first-person mobile titles.

The Fall is styled after Deus Ex: Human Revolution, the third game in the series, but is a direct sequel to Icarus Effect, a related novel. The Fall follows Ben Saxon, a mercenary who’s quickly betrayed by his PMC group. After the introductory mission and cutscene lay the foundation, the pacing slows down a bit as Ben tries to regain focus. Suffering from side effects of his augmentations, Ben searches the streets of Panama in order to get the drug that eases the symptoms. In doing so, Ben stumbles upon a conspiracy involving gangs, corporations, and drug dealers that ultimately brings everything full-circle.

The story isn’t spectacular, but it’s just strong enough to act as motivation to continue pushing ahead and see what happens next. There’s not a lot of pushing ahead to do, as a single playthrough only lasts about four to five hours. There are a few scattered side quests that add some value, but most of them are overly simple and are only worth doing when in need of cash. There’s also a New Game+ mode that allows players to re-play Deus Ex: The Fall with a harder difficulty and all the upgrades they’ve already unlocked. New Game+ is fun, but doesn’t do much to help you feel better about the rather abrupt ending.

In true Deus Ex fashion, The Fall allows extensive customization of Ben’s abilities. There’s a menu that breaks down all of Ben’s augmentations and how they can be buffed. Throughout the game, Ben will earn points that are used to increase his abilities. Some abilities can be toggled, like stealth armor, while others—such as punching through walls—can be activated in certain situations. There are also numerous passive abilities, such as recoil reduction and increased move speed. The Fall can be played either stealthily or run-and-gun, and the augmentations do a great job at influencing play style. 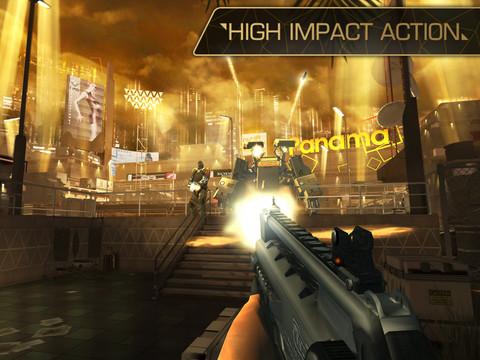 No matter how you choose to play the game, Deus Ex: The Fall features a great control scheme. With optional aids, such as targeting assistance and tapping to move to a spot, controls in a mobile FPS have never been this sharp. First-person fans who are used to the dual-analog controls from consoles will adapt quickly to the dual-touch controls found here. There’s a bit of a learning curve, especially when it comes to shooting during movement, but running and gunning is still a valid strategy. By double-tapping the screen, Ben will run to that location, freeing up the possibility to aim and shoot while sprinting. There are hiccups from time to time, like trying to line up precise headshots, but The Fall sets the bar high for future mobile shooters.

The environments and visuals are mostly strong, as well. Many character models can be hard to take seriously, but the major characters and most of the environments look good on the iPad. Deus Ex: The Fall is far from the best looking game on mobile, but it’s rarely bad. Enemy AI is where things take a bit of a down turn.  As I was playing with my silenced pistol, I frequently shot enemies from afar, watched their buddies find the body, look around for a second, and go back on patrol. Meanwhile, if I shot one and didn’t get the kill, every enemy in the room flooded to my location, leading to a likely death. The AI’s omnipresence and stupidity work together in a frustrating way that frequently stands out as the weakest point of the experience. 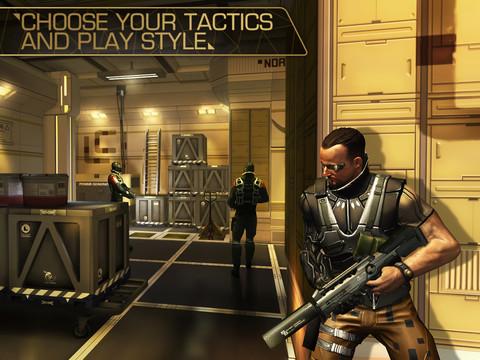 Even with these problems, Deus Ex: The Fall sets a precedent for first-person shooters on mobile. The touch controls are the best among mobile shooters, and the story does a great job complementing them. There’s a ton of customization, from abilities to weapons and weapon upgrades, and it’s unfortunately impossible to even begin to taste the depth of the arsenal in a single playthough. The Fall misses its shot a few times, but the targets it hits more than make up for a few mistakes. If your hardware can handle it, The Fall is well worth your time.