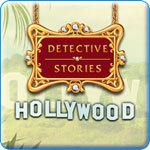 Detective Stories: Hollywood is a very long hidden object game with glossy graphics and lots of inventory puzzles. However, boring dialogue and tedious gameplay make the game less entertaining than it should be.

The short description sounds great. You are a private detective called to a major Hollywood studio to investigate the disappearance of $10 million dollars, a famous actress, and the latest print of a new movie. You’ll visit multiple movie sets, offering a lot of variety, and solve hidden object tasks, inventory puzzles, and mini-games. Most characters are drawn to resemble famous movie stars, from Will Smith to Clint Eastwood.

Unfortunately, the pacing of the game is so slow it almost becomes unplayable. Each scene works the same way. Angela (your character) visits a studio location, looking for a specific person. That person isn’t there, and she meets another character who says they will go get the person, but meanwhile Angela has to help with a mundane task: clean up the set, fix a soda machine, collect props. She always agrees because “I have nothing better to do.”

She then does two or three of these tasks while the other character looks for the missing witness. They come back and tell Angela that the person she’s looking for isn’t there, but has gone on to the cafeteria or the office or another set. Eventually Angela catches up with the witness—who tells her nothing more than that he/she saw the actress or the money or the film yesterday. It’s amazing, but that same scenario occurs more than 30 times.

Angela never finds a physical clue. She never recaps any information she’s gotten. She never asks a question other than “Have you seen X?” She never has a reason to do anything except clean up so the other person has time to answer the question.  There is a huge amount of dialogue, and no information.

The hidden object scenes are repetitive, too. You will search for a shattered crowbar or water faucet handle or hammer or scissors at least 3 or 4 times each. The object list is supposed to identify the parts of the objects that you’re searching for, but it uses an inconsistent grayed out scheme that doesn’t help much.

Worse, objects change color while they’re in the scene, so that a length of cable may be red against a red curtain and a length of the same cable brown against a brown floor. Put them together in inventory and they’re suddenly all orange. It makes searching for the fragments unsatisfying.  You often have to search the same scene for the same objects three different ways in a row—by name, by silhouette, and then to put the objects back in the scene.

The most boring task is dusting. You search a scene for speckles of brown or red dust. Then you click the cursor 20 or 30 times, which dusts the object. There’s a nice visual effect as the dust kicks up, but by the time you’ve done this 200 times in a scene it just feels pointless.

The celebrity likenesses are clever but a little weird. Both the Will Smith lookalike and the Whoopi Goldberg lookalike are described as, and drawn as, 5’8″. In real life Smith is almost 6’2″ and Goldberg is 5’4.”  The game heights makes it clear these aren’t the real actors, but other than that it’s just distracting.

A few of the mini-games have very short timers which can be frustrating. If you are asked if you want to try again and you say no, you’ll go back to the beginning of the level, not the previous scene, so it could be 2 or 3 hidden object object tasks ago. And you can’t skip minigames, so eventually you have to master them to progress.

Other minigames are just too long, like the one with the fishtank. Most frustrating of all, some of the minigames involve putting together a map or instructions for the next task, but the scene clears before you get a good look at the final result. So you have to guess what to do even after you solve the puzzle.

None of these flaws are major, but when you put them altogether, it’s a C+ effort compared to other recent HOG releases.