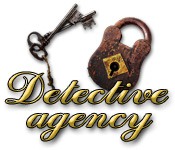 In Detective Agency, James is a private eye whose "daily proceedings revision" is interrupted by a call from his pal Bill at the "Editorial" who gives him a lead on a theft that’s just been committed. He decides to "turn to this case." Just what we needed! Another hidden object game with a lazy whodunit plot and badly translated English.

It’s not that I have anything against mysteries. In fact, the idea that you’re searching a scene for clues actually makes perfect sense in the context of a hidden object game, where the goal is to hunt a crowded room to find the objects on a list. However, it’s a little too much of a stretch when I’m asked to search James’ office for tools to take with him on his investigation, and those tools apparently include a crown, two globes and a butterfly.

The story itself is a maddening series of visits to various buildings where no one will help you until you perform a mundane task for them first, like fixing a radio, turning on the lights, or – the most absurd – putting a man’s pearl necklace back together. And then inevitably they just tell you that they can’t help you anyway, and to try a different location instead.

The levels aren’t timed, but too much random clicking will result in your cursor being frozen for a few seconds. There are ample hints to be had, which are replenished by finding and clicking on tiny magnifying glasses hidden in the scenes. Unfortunately, the hint system itself is annoying. Instead of just highlighting an item, you have to move a magnifying glass around the screen while it clicks and flashes confusingly until it suddenly begins beeping very quickly to signify that you’re close to an item. If it had been well-implemented it could have been a cool feature, but as-is it’s finicky and too much of a pain.

There are a handful of locations to visit around town, and the graphics aren’t bad although they’re a far cry from "stellar," as the game description claims. In between levels you’ll play a variety of mini-games, all of which are enjoyable though standard variations on familiar themes (connect the electrical tubes to close the circuit, match pairs of cards, decipher the secret message, and so on). Unless you’re mechanically inclined, you’ll probably get tripped up by the puzzle that expects you to re-assemble a radio, but thankfully you can skip any mini-game you like.

You have to find items either from a list or by silhouette, with the odd spot-the-difference challenge thrown in for good measure. The silhouette puzzles are far easier to deal with, since many of the items have been mis-labelled or are simply too vague. Does "hat" refer to the beanie or the fedora? And "piece" could refer to half the objects in the scene. A "cell" is actually a birdcage, a "plate" is actually a bowl of rice, and "map" looks more like a paying card.

Detective Agency is another one of those games that could have used more guidance and localization before it was released to the general public. It does nothing to push the genre forward, and it’s filler at best. It’s also a short game that won’t last much beyond the 60 minute free trial.