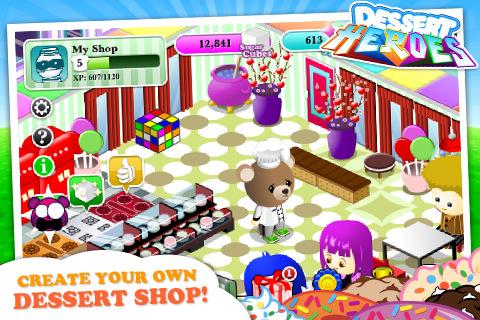 Dessert Heroes is a restaurant sim with a few new twists, but a largely familiar taste

Dessert Heroes isn’t all that different from the large number of other restaurant themed social games in the App Store. It’s bright, colorful, and gives you plenty of options to build and customize your bakery. The core gameplay is spiced up a bit thanks to a handful of mini-games, but it’s not really enough to block the feeling that this is a game you’ve played before.

As the name implies, Dessert Heroes is all about tasty treats. You’ll be baking cakes and cupcakes and selling them to customers in exchange for sugar cubes. Those blocks of sweetness serve as the main form of currency. The goal is to continue improving your little shop, and to do so you’ll need plenty of sugar cubes. It costs money to bake cakes, to purchase new stoves, and to decorate and expand your business.

As with most social games, baking takes time in Dessert Heroes. Each piece of pastry has a time limit attached to it, some take a minute or two, while others take hours or even days. And, generally speaking, the longer it takes to bake the more money (or sugar, rather) it will earn you. So it’s all about reinvesting. It takes money to make money, and the more money you make, the more you can earn. But in addition to useful things like stoves and displays, you can also use sugar to spruce up the joint. There’s a solid amount of aesthetic items to purchase, ranging from wallpaper and robot statues to new clothes and hairstyles for your avatar.

It’s all pretty standard stuff, but the one aspect that makes Dessert Heroes somewhat unique is its mini-games. There’s a Deal or no Deal inspired game, where you’ll be picking out golden cupcakes with the hope of finding the one holding the most sugar. There’s also a scratch ticket game where you try to match up numbers to win, and another game where you’ll need to tap a cake as many times as possible without hitting a flying bomb. The games are simple but provide a nice distraction. 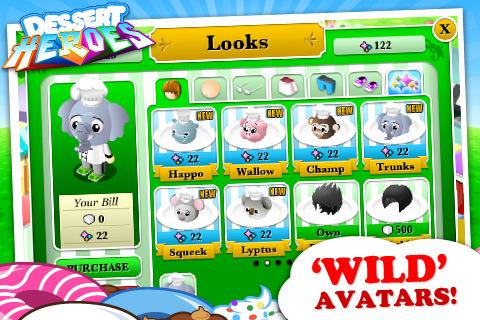 Visually, Dessert Heroes sports the same isometric, 3D style visuals as Astro Ape Studios’ previous effort, Office Heroes. That means it’s cute and charming, though it’s also much brighter and more colorful than its cubicle themed counterpart. And because there’s a heavy emphasis put on customization, Dessert Heroes offers up a strong amount of options on this front. There are plenty of ways to deck out your building, and lots of different variations when it comes to building your avatar.

But the mini-games and great customization options aren’t enough to mask what Dessert Heroes really is: yet another restaurant themed social game. The core gameplay remains identical to other similarly themed games in the App Store. It’s not bad in any sense, just devoid of much in the way of originality. It looks cute and plays well, but this is a cake we’ve already tasted many times before.