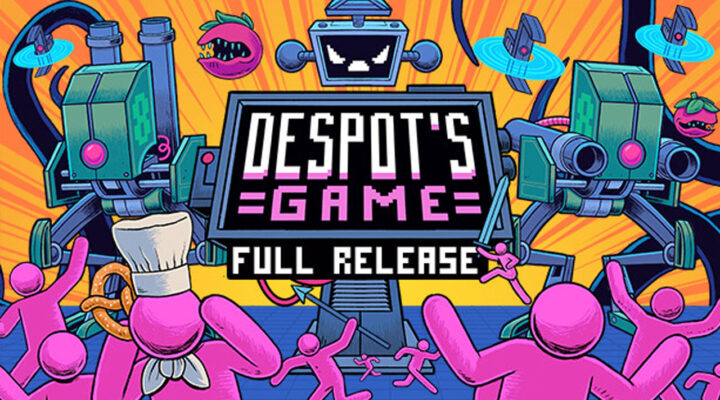 The game does end eventually, meaning we can't keep playing.

Despot’s Game is a strategy survival pixel game, developed by Konfa Games and Tiny Build. Set in a dystopian future where you play as a strategist, you are forced to guide humans through Despot’s labyrinth.

Constantly breaking the fourth wall and taunting you as you progress (or, as I did, you get stuck on the same level), Despot provides you enough willpower to attempt to best the game with “puny humans” just to wipe the smile off its robotic face all from the introduction.

Let’s play a game: I’ll give you some puny humans, and you try to help them make it through my labyrinth.

“Who is Despot?”, you may ask. It is left uncertain, but the villainous antagonist of the game is constantly talking to you through text boxes, teasing you, belittling you, and… well, antagonising you. The menacing robot is the perfect enemy for you to face off against in an extended game of cat and mouse.

Sitting playfully on-top of the thick layer of tyranny is a form of self-awareness that is used throughout the game and it’s marketing to elevate the dark comedic tones. On the iOS app store, Despot narrates the description similarly to how it does in the game, describing the game as “[…] a roguelike game. Well, roguelite, if you’re a nerd who loves compartmentalising us creators into strict genres.”

Aside from the main antagonist of Despot’s Game, what gripped me was the survival element and above all, the first rule: if you lose, you have to start over from the very beginning. In this game, there are no checkpoints. Once you die, you die, and all that remains is the knowledge that came with achieving as much as you did.

Of course, replaying the game makes you a better player, but before long it will annoy you to high heaven! What better way for Despot to punish you? With this slight setback permanently chilling on the horizon, you are forced to play with even more care than you would on any other usual strategy game.

Look After Your Humans

As stated before, the game itself consists of clearing rooms within Despot’s labyrinth that contains an array of enemies, varying from zombies all the way to Daleks. Every level in the labyrinth ends with a challenging boss fight. Clearing a room will earn you tokens which can be spent on humans, weapons, and mutations, taking full advantage of the dystopian setting.

A survival element is introduced when your team goes hungry and you are forced to feed them by purchasing food with tokens. Alternatively, you can sacrifice a human in any room in exchange for food – another fun decision to consider carefully!

After a while of playing, however, I felt personally responsible for my rag-tag team of humans, as I was the one sending them into battle. Each time they die, they cry a high-pitched, innocent, little scream, which shatters my heart every time it happens. This sudden feeling of responsibility made me play in a way where I considered every option before planning my next move due to the dire consequences of failure.

I recall one time that I managed to clear a level and defeat the boss only to realise that the battle decimated my team, leaving me with only two humans. Despite being promoted to the next level, I was doomed to fail straight away and be sent back to the beginning of the game. The tragic exchange made me realise that every battle counts, sparking a feeling of unease with every click from my clutching hands.

It goes without saying (but I will write it anyway) that the artwork for this game is amazing, taking the limits of what kind of atmosphere can be created in a pixel game and running with it until it reaches a gloomy, dark, dystopian aesthetic.

The image is evenly matched by a soundtrack that’s filled with synthesisers and electronic drums, playing into the futuristic setting and providing the rhythm for your strategy.

Despot’s Game is a challenging, fun, and hilarious pixel strategy game that truly pushes you to the edge after about the hundredth time you are sent back to the beginning. Amidst the chaos of my desperate attempts to keep my team together in one piece, I may have found the perfect strategy game. While it is easy to pick up, the ever-evolving boss fights and randomly generated events ensures that you’ll spend a long time playing and have a good laugh while doing it.