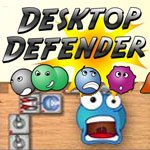 They say a clean desk is a sign of a sick mind, but what if your work surface is swarming with malevolent creepy crawlies? When the prospect of cleaning your desk is far less exciting than defending it from a virtual battleground full of persistent invaders, it's time to ignore your clutter piling up around you and boot up your computer. Desktop Defender, the Facebook version of the popular Desktop Tower Defense game, puts you in charge of mounting an organized defense of your blessed mess.

Each round spits out a new wave of creatures called “creeps” that will make a beeline towards your goal area and whittle away at your health if they reach it. You'll want to stop them from achieving their goal by deploying a maze-like series of different defensive turrets to slow their march. These towers attack anything within range and can be upgraded to increase their efficiency and power. The objective is to obliterate the parade of creeps before they get to you. Victory only comes when you're still standing after waves and waves of creatures have thrown themselves at you.

The challenge in Desktop Defender comes from working within the limitations imposed on you. There's only a finite amount of space to work with on the playing field, and some shaded blocks cannot be built on. You also have a limited amount of money to start with to purchase and upgrade turrets. Every creep you destroy adds a small amount of cash to your war coffers, but choosing how to spend your funds wisely is the key to success. Winning a game earns you coins that can be saved up and spent on unlocking new towers that shoot frost, ink, swarms of missiles, and other defenses. There are also special bonus powers you can buy that influence the battlefield in different ways, like slowing down enemies, speeding up your tower guns, and causing damage.

Earning Defender Points over the course of many games eventually increases your level, throwing new and tougher creeps at you at regular intervals. This is a cool feature that rewards frequent play. Still, it's the quest to amass coins to unlock new stuff will keep you coming back to play new matches. You can spend money to buy coins immediately, but it's more rewarding to earn them through playing the game.

Coins also tie into the social networking aspect of Desktop Defender. Though it's mainly a single-player game, inviting friends lets you compete for the high score and attain special benefits. You gain 500 coins for every friend you invite and an additional 50 coins whenever a friend is playing. It's also fun to mess with them, by sending a horde of ninja creeps charging across their screen when they're playing. Doing so will cost you varying amounts of coin. However, it's worth the satisfaction of causing some mayhem.

Desktop Defender is a strong tower defense game selection for anyone who is up for a few quick matches, but it also encourages you to stick around and strive for some long-term goals. This is a big part of what makes it special. Since only a few towers and abilities are available from the start, there's a lot of content to unlock. The Facebook integration and coin system gives the classic Desktop Tower Defense formula a lot more mileage than you'd expect, and it brings the experience to a whole new level.