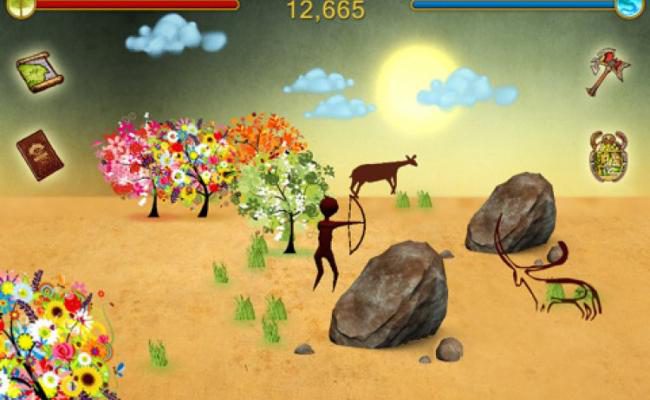 One of the best parts of surveying the mobile scene is its ability to surprise you. All too often I’ve started up a game having scoured screenshots or watched a trailer on YouTube expecting the worst, only to be pleasantly surprised when it finally kicks into action. If nothing else, you learn to look beyond your first impressions – something Desert Quest proves, sadly, can work both ways.

Here’s a game that looks the part, but plays far less smart. The idea is to wander around open, expansive 3D levels slamming down the scores of silhouette style animals that cross your path.

At your disposal – at least to begin with – are either a bow and arrow or a hammer, though both prove about effective as one another, tied to a virtual thumbstick on the right of the screen. Movement is pinned to a thumbstick on the left, and you’ll spend most of your time hunting down various items hidden in amongst the trees: gems, mana, health, spells – they’re all up for grabs.

It’s the gems that, once all the spells have been found, prove the most useful, however. When laid out following patterns delivered to you in spell scrolls, such magic can do everything from transport you to a new section of the map to top up your health.

They’re not the only items to find, either. Large sections of each map are locked off from play, only accessible once you’ve found a specific key. In fact, all elements of play focus on the idea of hunting down what are minute icons on the level floor in one way or another. And this proves to be Desert Quest‘s biggest problem. Not only are most of the items stupidly hard to find – meaning you spend your entire time retracing your steps to pick up what often appear invisible icons – but the very process of tacking them down is especially mundane.

The game tries to lift affairs by throwing an assortment of wildlife in your direction, ganging up on you and surrounding you mid-hunt. However, the process of taking them down is entirely routine – simply aim the stick in their direction and watch them fall. The end result is that you never really feel connected to the gameplay, nor especially engaged by it. 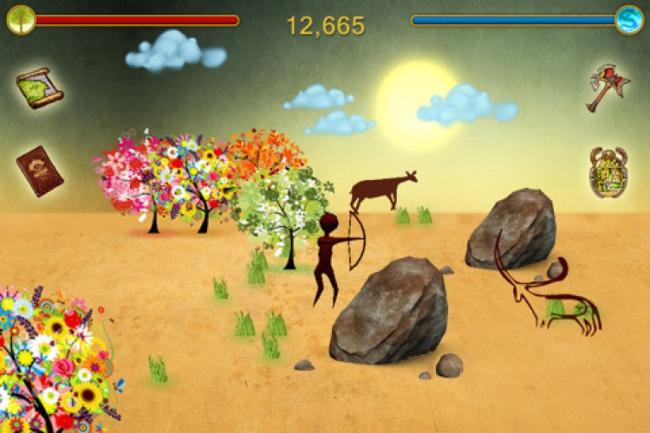 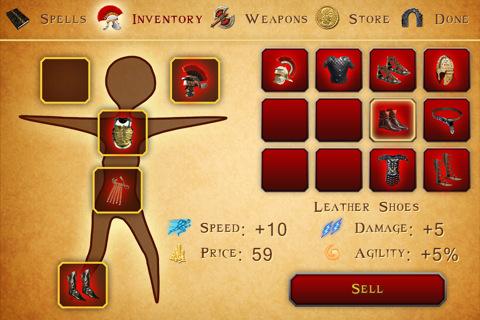 It’s a sad state of affairs, given there’s evidently plenty of promise built into Desert Quest. With the ability to up your arsenal, and in turn, take on ever large numbers of wildlife, developer Sad Cat Software has clearly designed Desert Quest to be a game worthy of taking players along for the long haul. But while the structure might be in place for long term play, the gameplay simply isn’t up to the test.

Within ten minutes of wandering around the first stage – and, that’s no exaggeration as to the time you’ll need to devote to it – Desert Quest will already be testing your patience. Even if you do happen across the right gems and the right keys to move forward, the fact the only thing waiting for you is more of the same is more than a little disheartening.

Which brings us back to where we began. On looks alone, Desert Quest plays the part of a top notch iPhone release with aplomb. Scratch beneath the surface, however, and there’s little here to get all too excited about. Just as with big budget console releases before it, Desert Quest serves as the perfect warning that all the flashy looks in the world can be incredibly deceiving.