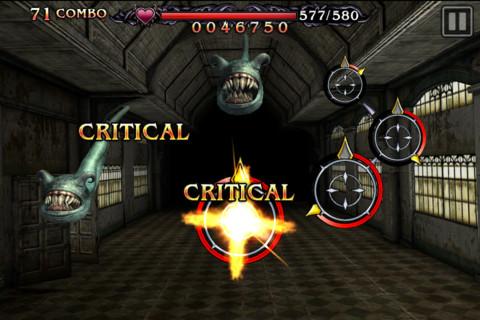 iNiS brings their amazing style of rhythm gameplay to the App Store, but does Demons’ Score strike a chord with us?

In its few short years on the gaming scene, just about every genre you could ever imagine has been tried on the iPhone.  The one notable exception however, at least in my mind, has been an iNiS-style rhythm game.  Best known for the touch-based DS hit Elite Beat Agents (or if you’re a real game nerd like me, it’s predecessor Osu! Tatakae! Ouendan), the folks at iNiS seemed like a perfect match for the growing smartphone market.  And with the release of Demons’ Score, they’ve proved that hunch right… more or less.

Demons’ Score tells the story of a daughter who, after receiving a message from her father, goes to visit his workplace – which just happens to be an asylum that’s opened an unfortunate gateway to hell.  As the game’s heroine you’ll travel through the asylum on rails, battling a variety of demons along the way with the power of well-timed taps and swipes, all while keeping in time to music.  Every other song will lead you to a boss fight with a pretty nasty hellspawn who, once defeated, will join your party (albeit, for a price – more on that later).

The presentation in Demons’ Score is a stark departure from iNiS’ earlier games of this nature, but the gameplay doesn’t stray too far from what fans of the developer already know and love.  Keeping in time with the music, you’ll need to tap, swipe, and drag on a variety of circles presented on the screen.  There’s a precise moment to touch if you want to net the highest points, though if you’re a tad premature, it’ll still count as a hit – and in the end, that’s really what matters the most.

Like previous iNiS offerings, the gameplay here is outstanding.  If anything, being able to ditch the DS’ stylus in favor of your own fingers makes this something of a superior offering – at least as far as touch recognition goes.  The problem, though, is that everything outside of the polished gameplay feels surprisingly awkward.

Voice acting (and the dialogue the actors have been given) is atrocious.  The music in the asylum journey between boss fights recycles the same awful Devil May Cry-style hard rock from a decade ago ad nauseam.  And while the game is a visual triumph in some respects, this is countered by some lazy design choices – like not having mouths move when characters speak, or displaying cut scenes in still images and using the same environment over and over between bosses. 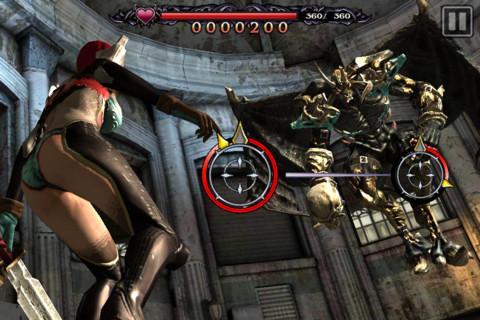 Other problems creep up too.  The most notable of these – or at least the one I expect folks to gripe about the most – is the game’s in-app purchase system.  Square Enix has launched Demons’ Score at a premium price (maybe not by their standards, but certainly when compared to most App Store developers), yet they’ve decided to lock nearly all of the playable demons behind a paywall.  When you beat a demon, you “unlock” it, but this simply makes it available for purchase.  Each demon will set you back a whopping $2.99, and while there’s the suggestion that it might modify a player’s few basic stats, the real draw here is the visual overhaul you character is given.  Essentially, you’re paying for the right to unlock a costume that you’ve earned through play.

Luckily, you probably won’t feel too motivated to make the purchase after unlocking the first demon for free.  Why, you might ask?  Because the “costume” you’re given is kind of unsettling.  Your heroine will get a cool set of threads based on the design of the demon… and the demon’s voice.  So this scantily clad, previously bubbly-voiced woman will now sport the voice of a gruff, mean-spirited (usually male) creature from hell.  It’s a terrible mix, and even if you find it amusing, that’ll wear off pretty quickly.

The other (and in my opinion much more devious) design frustration is how the game forces you to replay levels if you want to ever see the ending.  As I’ve tried to convey here, the “in between” moments where you wander the halls of the asylum all have the same music and environments.  That could get tedious on one play through, but what if I told you that to actually finish the game you had to play it through three times?  And that each consecutive play session got longer and harder?  That’s Demons’ Score in a nutshell. 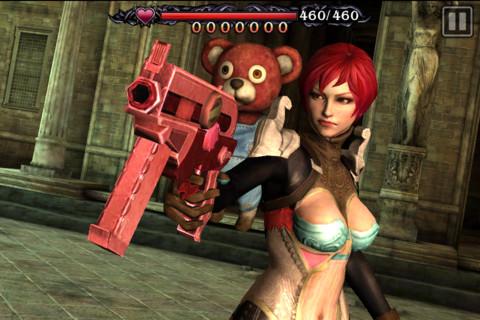 Regardless of your personal skill level, you’ll need to play easy, then normal, then hard if you want to finish the game – and each progressive difficulty level adds new demons into the mix, increasing the length even further.  I’m all for a game that lasts, but I don’t think I’ve ever seen a design that so blatantly tries to stretch out your play time without any real substance.

Demons’ Score is a hard game to judge.  On the one hand, it finally brings the iNiS design philosophy to the App Store, has some great visuals, and occasionally delivers some decent music.  On the other hand… everything you just read in this review.

If you like rhythm games, Demons’ Score is a must buy because, well… iNiS.  Fans of iNiS have been clamouring for this moment ever since the App Store first opened its doors.  In fact, here at Gamezebo we even included their past work on our list of 7 Nintendo DS games we’d love to see on the iPhone. And Demons’ Score is like a cross between those earlier efforts and House of the Dead which, in a word, is awesome.  But not everything here is as solid as the gameplay and the concept.  Be prepared to love what can be loved, and feel puzzled by the rest.