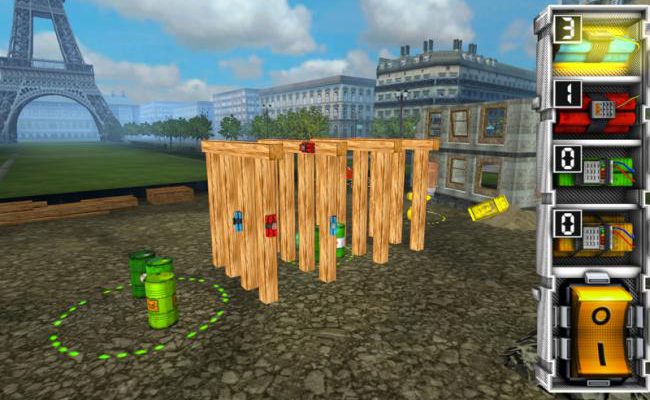 A few nights ago I was talking to a friend of mine and just happened to mention how much I enjoy explosions and puzzle games, and wondered why there weren’t more games to mix these two totally different elements into a nice portable package. Well, just my luck – someone else had the same thought and has just released Demolition Master 3D, a game that actually bases a puzzle game around construction site explosions.

Your task in each level is to knock down different structures by placing bombs on them. You choose the types and placement of the bombs, adjust their timing if you wish (to help create a domino effect) then hit the trigger to set it off. You pass the level if you get the height of the structure knocked down to a certain target and can get bonus points if you hit items placed around the level.

You’re given a variety of different bombs to work with that have different effects on the various materials found in the game. For instance, some are good for wood and concrete but won’t do much damage to steel. They also have varying blast radii and some even cause materials around them to get pulled towards the explosion rather than away from it. All in service of not just blowing up parts of the structure, but getting the whole thing to come crashing down.

But it’s not just getting it to come down. There are certain areas you’ll need to avoid getting debris and other area that will give you bonuses if some does fall there. Each level has different objectives, and you can earn up to 3 stars for meeting them each time. You’ll be scored on how well you do and there are various trophies and achievements that can be unlocked in the process.

What’s amazing is how difficult that can actually be. Sure in first few levels it’s easy to find the keystones of the structures and just put the bomb there, but before long it really ramps up in difficulty. It’s only a few missions into the 70 included where that simple strategy falls away and you need to get a lot more creative and cunning in your bombing choices.

For a game about blowing stuff up it’s actually quite a complex endeavour. This isn’t the kind of thing where you just put a big stick of dynamite in the center and everything just goes flying. These are tactical, directed explosions, and if you want to knock down a structure then you need to be very exact in your placement and timing.

My only complaint about the game is probably going to sounds like a childish one, but I wish the explosions were bigger. Like, a lot bigger. In a game world where size, scope and real world value don’t apply, why are we blowing up 2X4’s when we could be doing it to huge structures? There’s a lot more fun in knocking down an empty building that toppling a 4 foot barrel. At the very least I’d like the explosions that are in the game to feel more forceful. Sticks of dynamite should feel like something when they go boom, but these just go… pop. 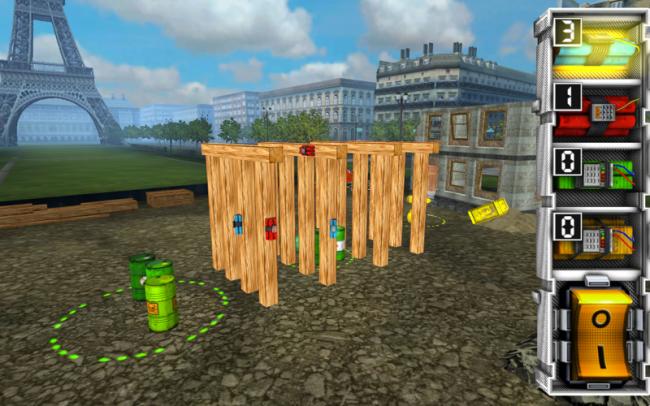 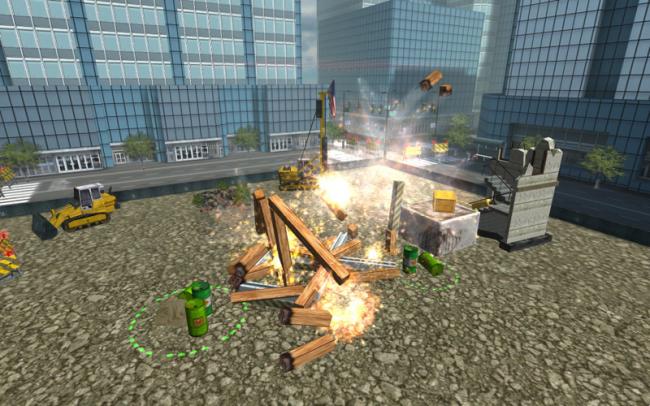 The graphics look really good, and you can swipe to rate the level and get a good look everywhere since it’s all rendered out in 3D. This is actually kind of key since playing the bombs on a particular piece isn’t usually enough, it needs to go on the right side of that piece as well.

With a ton of variety in the levels and the devilish complexity offered, puzzle game fans should naturally be drawn to the Demolition Master 3D app like a moth to a flame. Word of caution to the more casual of you out there though – while blowing stuff up is always a good time, the game gets pretty hard and requires a skilled, patient hand to complete.